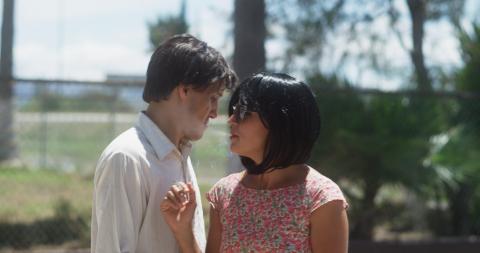 UPDATE: We have reached our limit of free views of Fauna. You can still listen to our podacst with Nicolas Pareda here on our blog.

FAUNA (Mexico/Canada, 2020, 70 min., Spanish with English subtitles, Directed by Nicolas Pereda) In a run-down Mexican mining town, Luisa brings her boyfriend Paco home to meet her family. They’re both actors, and the visit grows increasingly (and hilariously) awkward as Luisa’s father becomes fascinated by Paco’s minor role in a television phenomenon. Fauna’s exploration of performance deepens as the film reinvents itself halfway through, reconfiguring its characters into a mystery plot set at a nearby hotel. Scenes and characters begin to repeat and revise each other’s earlier incarnations, creating a deadpan mindbender that grows more entrancing with each beguiling detour, and invites a parallel universe of interpretations (Mike King).

“Lyrical, haunting, and at times extraordinarily funny… melted and then reconstituted my movie-addled mind” (The Globe & Mail).

“Uniquely profound and sometimes hilarious, Fauna is one of Pereda’s most memorable, enjoyable, and poignant works” (The Gate).

For a limited time, the Cinematheque is offering an opportunity to view Fauna at home for free. To request a viewing of Fauna, send an email to info@cinema.wisc.edu and simply remember to place the word FAUNA in the subject line. No further message is necessary. Fauna is presented with the support of UW Madison’s Latin American, Caribbean, and Iberian Studies Program (LACIS).

On a new episode of Cinematalk, the official Cinematheque podcast, our guest is Nicolas Pereda, the writer, director, and editor of Fauna. His work has been the subject of more than 30 retrospectives worldwide in venues such as Anthology Film Archive, Pacific Film Archive, Jeonju International Film Festival and TIFF Cinematheque.  Fauna premiered at the 2020 Toronto Film Festival, and has gone on to play the New York, San Sebastian, and Los Cabos Film Festivals. Listen to Mike King talk with Nicolas Pereda here on our blog, or subscribe to Cinematalk through Apple Podcasts or wherever you get your podcasts.