The Cinematheque's free series of view-at-home movies brings you, for a very limited time, a double feature of Hollywood science-fiction classics that were originally selected to play in the 2020 Wisconsin Film Festival. These two clever and thought-provoking gems are presented with the support of the Wisconsin Science Festival, October 15-18. 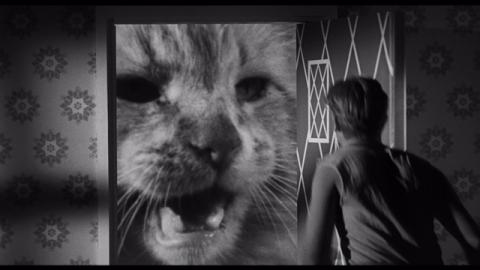 THE INCREDIBLE SHRINKING MAN (1956, USA, 81 min.) “The mist...That mist!” After being exposed to an ominous cloud while relaxing at sea, everyman Scott Carey (Grant Williams) discovers that he is suddenly shrinking in stature. At first, Scott’s condition causes tension in his marriage, then he must contend with the media when he becomes a national curiosity. Soon down to a tiny fraction of his former size, the title character finds himself in a strange new world fraught with danger that comes from previously harmless things around his house, like his pet cat, a leaky water heater, and a basement spider. Working with a clever, literate screenplay by science fiction and fantasy giant Richard Matheson (I Am Legend, The Twilight Zone), the talented Universal Pictures contract director Jack Arnold (Creature from the Black Lagoon, It Came from Outer Space) manages to deliver action-packed, ingeniously devised special effects sequences while keeping a firm grip on Matheson’s powerful, existential subtext and awe-inspiring conclusion. 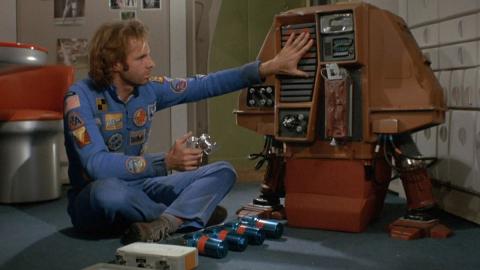 SILENT RUNNING (1972, USA, 89 min.) This science fiction cult classic is set in a future when all organic plant life has disappeared from earth. A wild-eyed Bruce Dern plays Freeman Lowell, one of four human voyagers eight years into their mission aboard the space vessel Valley Forge. Assigned to watch over the geodesic domes that protect and nourish the last remnants of trees and vegetation, Lowell is the only one of his comrades who is devastated when orders are given to destroy the forests. Lowell’s impulsive reaction sends him and his plants hurtling toward Saturn, accompanied only by three drones he re-names Huey, Dewey, and Louie. Silent Running marked the directorial debut of genius special effects creator Douglas Trumbull, celebrated for his work on 2001: A Space Odyssey. Working from a script written by Michael Cimino and Deric Washburn, future collaborators on The Deer Hunter, with an assist from soon-to-be-TV-colossus Steven Bochco, Trumbull crafted an unforgettable tale of survival and a potent ecological warning. The wonderful costumes, production design, and miniature effects later influenced a number of other sci-fi milestones from Star Wars to Alien to Interstellar.

Beginning at 12 a.m. on Thursday, October 15, the Cinematheque will present a virtual cinema engagement of The Incredible Shrinking Man and Silent Running that you will be able to watch at home for free. The engagement ends Sunday, October 18 at 12 midnight. To receive access, simply send an email to info@cinema.wisc.edu, and make sure to include the word SCIFI in the subject line.

On a new episode of our Cinematalk podcast, join Cinematheque Programmers Jim Healy and Ben Reiser in a spoiler filled-conversation about The Incredible Shrinking Man. Listen below or subscribe to Cinematalk through Apple Podcasts.

For a fun and digressive discussion on Silent Running, we invite you to listen to a new episode of another podcast, 70 Movies We Saw in the 70s, co-hosted by Mike McPadden and Cinematheque Programmer Ben Reiser. Listen below or subscribe to 70 Movies through Apple Podcasts.