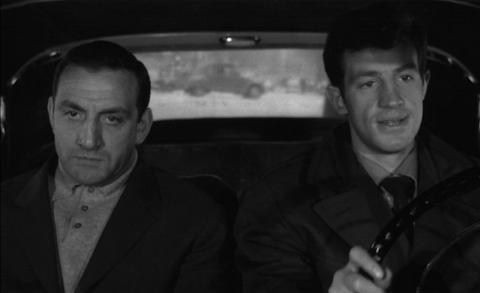 CLASSE TOUS RISQUES (Claude Sautet, France/Italy 1960, French and Italian with subtitles): In this hard-hitting French film noir, Lino Ventura plays a career thief who executes a broad daylight payroll heist on the streets of Milan. With the help of a new partner (Jean-Paul Belmondo), he returns to France after holing up in Italy, and realizes, perhaps too late, that there’s more to life than being a gangster. Following up on 50s masterworks like Rififi while anticipating 60s thrillers like Le Samourai, Classe Tous Risques has been virtually unseen in this country for over 40 years. It’s a penetrating study of a tough guy at the end of his rope, with the first teaming of Ventura and Belmondo, two of French cinema’s greatest icons.

The Cinematheque has a limited number of opportunities to view Rififi and Classe Tous Risques at home for free. To request access, send an email to info@cinema.wisc.edu and make sure to include the word RIFIFI in the subject line or the first line of the email. Everyone making a request will receive access to view both movies

We also invite you to listen below to a wonderful interview with Rififi director and co-star Jules Dassin from New York Film Forum's Director of Repertory Programming Bruce Goldstein.

Cinematheque-at-home programming will resume in early September. Stay healthy and safe. We value your support for the Cinematheque and we look forward to being able to watch movies with you soon in the proper cinematic settings of 4070 Vilas Hall and the Chazen Museum of Art.

Film Forum Presents · FROM THE ARCHIVE: RIFIFI – Jules Dassin
<<Cinema in a Time of Crisis
See JAZZ ON A SUMMER'S DAY for Free!>>