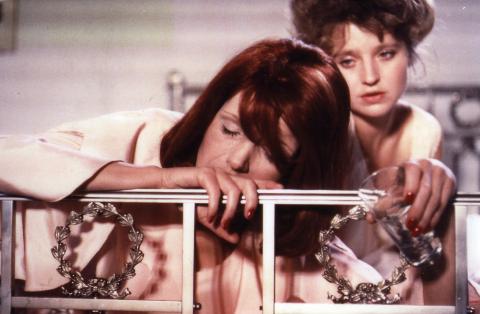 This essay on Rainer Werner Fassbinder's The Bitter Tears of Petra von Kant (1972) were written by John Bennett, PhD candidate in the Department of Communication Arts at UW Madison. A 35mm print of Petra von Kant will screen in our Sunday Cinematheque at the Chazen series of Fassbinder films on Sunday, September 23 at 2 p.m. This screening also serves as an appropriate prelude to our upcoming September 28 Madison Premiere of Nicolas Wackerbarth's Casting, a new movie about the pre-production process of a Petra von Kant remake.

We have every reason to believe, at the beginning of Rainer Werner Fassbinder’s The Bitter Tears of Petra von Kant, that the titular character has commanding control over her life. A successful fashion designer, Petra von Kant (Margit Carstensen, whose brilliance is hard to overstate) has just landed a coveted contract with Karstadt, a department store chain. She appears to be pals with American film director Joseph L. Mankiewicz. And she has recently left her husband, Frank, to whom she had formerly been devoted. She has her maid, the ethereally mute Marlene (Irm Hermann) do much of her designing legwork for her. When it comes to relationships, Petra seems well girded against the pain that they can cause. She notes to a friend that in relationships “you’re afraid of losing points” and that “people are made to need each other. But they haven’t learned to live with each other.” Not long thereafter, however, Petra meets Karin (Hanna Schygulla) a beautiful young model. Smitten, Petra initiates a relationship with Karin with the same crocodilian assurance with which she seems to conduct all of her business.

Things go south from there. A film about the destructive nature of power and submission in relationships, The Bitter Tears of Petra Von Kant elides any display of happy times shared by Petra and Karin (if any were had at all). The film instead leaps forward in time to a point where things between the designer and the model have soured substantially, the former hopelessly in love with the latter, all veneer of control abandoned. The silent Marlene watches all the while, even as Petra’s orders for her become more spiteful and insulting.

In its original iteration, The Bitter Tears of Petra von Kant was a stage play by Fassbinder that was first performed in 1971. The film retains an air of theatricality through its clearly defined three-act structure, its dramatic monologues, and its fixed bedroom setting. Yet despite all this, The Bitter Tears of Petra von Kant could hardly be called canned theater. Fassbinder explores Petra’s lair with a specifically cinematic visual resourcefulness, diluting the theatricality of the original text. Fassbinder uses close-ups to show snarling laughter and tear-streaked cheeks, images that are so crucial to the heart of the material that would have been difficult to communicate as effectively on stage.

Fassbinder also uses a camera to redirect focus, making characters’ reactions just as worthy of attention as their words. When Sidonie (Petra’s friend who first introduces her to Karin) first arrives at Petra’s apartment, the friends’ first moments of conversation are heard but barely seen through two windows, the second of which has venetian blinds drawn nearly all the way. The shot’s main subject is the silent Marlene, forlornly bowing her head so that her face is obscured by shadow as she presses a hand against the window. What’s more, the camera often places us on or close to Petra’s bed, heightening the feelings of frustration and inertia that are experienced by both Petra, crippled by her romantic longing, and Karin, who lounges on the bed with a discontented air of a cat whose owner won’t let it go nap somewhere by itself. In all these ways, The Bitter Tears of Petra von Kant captivates us without ever needing to let us leave its sole setting.

It’s true that the film isn’t the easiest watch, and there are no doubt countless people for whom the film’s painful romance may hit a little too close to home in one way or another. But can we also say that The Bitter Tears of Petra von Kant offers kinds of pleasure as well? There are times when we all wish we could behave as badly as Petra during the film’s last act. When Sidonie arrives at Petra’s apartment with a birthday present, von Kant squeezes her glass of gin so hard that it explodes. Soon thereafter, she stomps on her tea set like Godzilla wearing Gaultier. The insults hurled by Petra at Karin, Marlene, and even her own family have a spitting, vituperative precision that one wishes were as easy to summon under certain circumstances as Petra makes it seem. At times, you can’t help but marvel at the devastating wit of some of the acrimonious rejoinders Fassbinder was able to dream up. When Karin prepares to walk out on Petra, the designer drunkenly muses: “I wonder why you didn’t work the streets from the beginning.” Alluding to Petra’s money and status, Karin replies, “It was less strenuous with you, darling.” Check mate. When Karin clinically and cuttingly tells Petra that “you thrive on suffering,” she might as well be addressing an audience that will gladly stay put until they witness just how far, fast, and hard Von Kant will fall—an audience that may simultaneously cheer the titular protagonist on as she sobs and barks invective and supplication, as she both downs and breaks glass after glass of gin.

If you’re not enough of a masochist to enjoy such emotional excess, than you could at least remain transfixed by the hellish splendor of the production design of The Bitter Tears of Petra von Kant. von Kant’s white shag carpet—a kind of flooring perfect for gripping in besotted despair—runs all the way to the film’s most beautifully ludicrous piece of décor: a print Poussin’s “Midas and Bacchus,” whose characters seem to writhe in similar pleasure and agony as those of the film. A small menagerie of nude mannequins seems, like Marlene, to silently move and observe the film’s actions on their own volition. And then there are the costumes. Designer Maja Lemcke apparently did not work on any other film besides The Bitter Tears of Petra von Kant, but the film contains a career’s worth of beautifully insane dresses and wigs. Though there are many great looks to savor in the film, nothing can quite top the flamboyance of the outfits worn by Petra and Karin during their first evening together. Petra, nearly topless and draped with beads, looks like someone just rubbed a lamp to summon her. Karin, in a sultry Egyptian looking dress accessorized with metallic neck and arm bands, looks like Cleopatra from some angles and Barbarella from others. These may sound like knocks, but they’re not: they’re part of the over-the-top aesthetic that makes The Bitter Tears of Petra von Kant a joy to watch, despite (or, for the Marlenes in the audience, in addition to the film’s challenging and perceptive ideas about the power and pain of relationships.