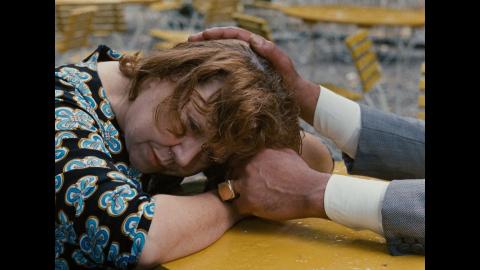 This essay on Rainer Werner Fassbinder's Ali: Fear Eats the Soul (Angst Essen Seele Auf, 1973) was written by John Bennett, PhD Candidate in the Department of Communication Arts at UW Madison. A 35mm print of Fear Eats the Soul will screen at 2 p.m. on Sunday, September 16 in the Chazen Museum of Art as part of our Fassbinder series and also as the middle film in an unofficial trilogy beginning with Douglas Sirk's All That Heaven Allows (screening September 15) and concluding with Todd Haynes's Far from Heaven (screening September 21).

The blunt, philosophical statements that abound in the films of Rainer Werner Fassbinder might lead one to believe that the German director could have been the world’s most humorously pessimistic fortune cookie writer. Among the titles that sound like sad advice—Love Is Colder Than Death, Beware of a Holy Whore, etc.—Ali: Fear Eats the Soul stands out as one of the most notable. As if “fear eats the soul” might be misconstrued as too cheery, Fassbinder begins his 1974 film with another melancholy admonishment that could have easily served as a title of another one of his wonderfully bonkers feel-bad movies: “happiness is not always fun.” With these two simple, sad statements, Fassbinder begins his simple, sad film about Emmi Kurowski (Brigitte Mira), an older cleaning lady from Munich who begins a deeply emotional affair with Ali (El Hedi ben Salem), a strapping migrant laborer from Morocco. As the two initiate their passionate affair, they must face the adversarial forces of Ali’s demanding and demeaning job, Emmi’s selfish children, and, most stingingly, the unconcealed racism and condescension of Emmi’s neighbors and coworkers.

In both story and style, Ali: Fear Eats the Soul owes a great deal to the excessive melodramas of Douglas Sirk—specifically Sirk’s All that Heaven Allows (1955), in which an older woman begins an affair with a younger man in an uptight and gossipy American town. Fassbinder more or less grafted this plot template onto Ali: Fear Eats the Soul, making the heroine older, the hero a foreigner, the neighbors nastier, and the children lazier and stupider. Fassbinder drew not only from the story of Sirk’s film, but also its mise-en-scène. In a 1971 article extolling the virtues of Sirk’s films, Fassbinder wrote that Sirk made films “with people, with light, with flowers, with mirrors, with blood, with all these crazy things that make it worthwhile.” Fassbinder populates his frames with similarly ostentatious imagery. Brightly colored costumes with elaborate designs burst at the neckline with severe collars, not unlike the costumes Dorothy Malone wore in Sirk’s Written on the Wind (1957). Like Sirk, Fassbinder lights his actors in a bright, confrontational way that leaves no flicker of affect unobserved and in a way that casts shadows of stair railings and window grates in large decorative patterns on walls.

Yet Fassbinder takes care to put his own spin on this style of mise-en-scène as well. Where Sirk uses movement of both camera and subject, Fassbinder seems to value stillness. Emmi’s gossipy neighbors or lunching coworkers adorn stairways and halls with the frozenness of statues. A similar stillness pervades long shots that observe and frame characters through doorways. The film’s close-ups linger on expressions, frozen with emotion, for several seconds before a character begins to speak. Sirk gave full stylistic voice to his characters emotional lives. In Ali, Fassbinder gives his images and story a Sirkian intensity, but arrests the fluidity of Sirk’s style, making the passions of the film simmer in a frustrated slow burn.

In addition to being an intellectual melodrama, Ali: Fear Eats the Soul is a film that is interested in both the immigrant experience in Germany as well as German xenophobia. This was not the first time Fassbinder had addressed this issue on the screen. In his second feature, Katzelmacher (1969), the director stepped in front of the lens to play a Greek migrant worker who faces harassment at the hands of young, listless Münchner. As is baldly apparent in Ali: Fear Eats the Soul, many German characters openly harbor viciously racist attitudes towards African immigrants. The film also doesn’t shy away from the systemic disadvantages that immigrants face. When Ali is rushed to the hospital with a stomach ulcer, a doctor with the bedside manner of an undertaker informs Emmi that many migrant workers develop them due to the stress of their working conditions and that Ali will be back in the hospital before long.

These moments of xenophobia are plainly expressed by the film, but a closer look forces us to ask a more uncomfortable question: just how enlightened is Emmi? Though it is alluring to accept a somewhat pat interpretation of the film in which Emmi is a simple yet benevolent older woman, her statements about the Nazi regime deserve more scrutiny. During her first meeting with Ali, Emmi alludes to her own stint as a member of the Nazi party. Though she does make the membership sound as if it were compulsory, she nevertheless talks about the time with not a small hint of nostalgia. Later, she takes Ali to a restaurant whose sole virtue for her seems to be that it was a place where Hitler used to go to eat. More blatantly, Emmi begins bossing Ali around and showing him off as a physical specimen once she regains favor with her coworkers who had previously shunned her over the romance. These details should be taken into consideration along with Emmi’s apparent comfort around Ali and his friends in our ultimate estimation of the character.

On the macrocosmic level, Ali: Fear Eats the Soul deals with the social world of Germany in the 1970s. On a more intimate level, the social world of Fassbinder and his stable of skilled actors bleeds into the film as well. As Fassbinder said in a 1974 interview about the film: “at some point films have to stop being films.” Brigitte Mira had, in real life, been in a relationship with a much younger man during the making of the film. Fassbinder himself had a fairly tumultuous relationship with El Hedi ben Salem. The director shows up in the film as the beer-swilling louse husband of Krista, Emmi’s daughter—a role played by the versatile Irm Hermann, with whom Fassbinder had lived for a period of time. If so much of Ali: Fear Eats the Soul feels true to life despite its florid, stilted stylization, it may be because the film is true to life on scales both vast and intimate.

<<A Cinema of Beautiful Devastation: ALL THAT HEAVEN ALLOWS
All That the Neighbors Allow: Todd Haynes's FAR FROM HEAVEN>>