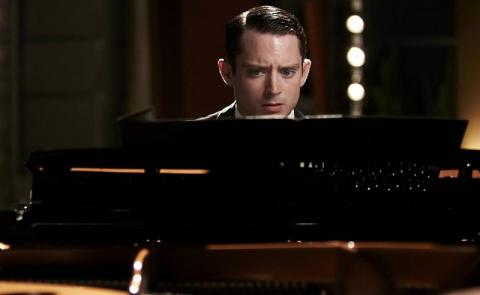 These notes on Eugenio Mira's Grand Piano (2013) were written by WUD Film’s Vincent Mollica. Featuring a screenplay by Damien Chazelle, Grand Piano will screen in our series tribute to Chazelle on Friday, February 9 at 7 p.m., the first half of a double-feature that concludes with 10 Cloverfield Lane at 8:45 p.m. The double feature screens for free in our regular screening room, 4070 Vilas Hall.

Before his ascent to Oscardom, Grand Piano was part of a slew of films that Damien Chazelle had written but not directed. These include the infamously titled The Last Exorcism Part II and the more fondly regarded 10 Cloverfield Lane. In Grand Piano, directed by Eugenio Mira, Elijah Wood plays Tom Selznik, a piano prodigy who returns to the stage years after screwing up an “impossible” piece written by his now dead mentor. All goes well until a man talking to him via a small ear piece (John Cusack) threatens to shoot his wife if he gets one note of the concert wrong. It’s an undeniably silly premise that, through the efforts of the film’s writer, director and stars, reaches its full cartoonish potential.

As critics were quick to point out, a sustained, florid sense of style also distinguishes the film. Careful editing and tricky cinematography (most notably a surprise split screen at one point) give even the straightest scenes of exposition a highly dynamic quality. Important to note, though, is the actual skill necessary to pull this off. Rather than shooting for coverage, Mira shot the film by picking up specific moments, which he edited over the course of filming and placed on an animatic. “He prevized that entire movie,” Chazelle told Indiewire, “I literally saw the entire movie on a computer.”

Indeed, both Chazelle and Mira speak very highly of one another’s efforts. In a Cineuropa interview, Mira claims that “the screenplay works without us thinking about its absurdity and lack of logic.” Chazelle applauds the incredible detail of the production in his Indiewire interview, saying, “I like movies where you feel like it was actually thought through.” This mutual respect speaks to the way in which the writer and director’s sensibilities work together in the film. Chazelle and Mira craft something that sharply engages the viewer; Mira’s very visible craft, as pointed out by Chazelle, means that those hooks for the viewer have weight to them. There’s a serious sensibility underpinning unserious subject matter.

Although not as immediately noticeable, the same is true of the film’s performances. In an Indiewire interview, Elijah Wood describes his ability to find an intriguing character in the film’s plot-driven script and to merge it interestingly with the film’s story. Truly, Elijah Wood is the film’s MVP. He describes working on the film as akin to being in a marathon; he had to play along to music, as well as listen to John Cusack and act himself.  Speaking with Den of Geek, Alex Winter (Bill and Ted’s Bill), who plays Cusack’s lackie, discusses the process of developing his character, notably saying, “Eugenio didn’t want us playing this movie with a nod and a wink, that would have been disastrous.” Like the film’s plot, the characters, or at least their situations, border on cartoonish, but the talent behind them lets the viewer engage with the film on a serious level.

Perhaps Grand Piano does carry the same weight as the similarly over-the-top 10 Cloverfield Lane, as they both contain a dramatic pull that feels genuine. That obviously works on a larger scale in Grand Piano, as the viewer is pulled through bizarre twists and turns, but also in small, sillier bits of business throughout. A pivotal moment in which Wood crumples up and throws down a piece of sheet music is underscored with a janitor in the background. Mira takes considerable time to observe the janitor shaking his head in disappointment and walking away. It’s a funny moment, but the film’s tone, established by its direction and performances, suggests a world that is so heightened that even the silliest of gestures can reasonably take place.

Following Grand Piano, Chazelle and Mira went different ways. Obviously, Chazelle would continue to explore an interest in music in his work as a Hollywood director with Whiplash and La La Land. The sense of ever snowballing catastrophe found in Grand Piano, 10 Cloverfield Lane, and even The Last Exorcist II (which climaxes in the apocalypse) is carried over into Whiplash. Mira has not made a film in the intervening 5 years. Talking to Indiewire, he clarifies that although he’d like to make Hollywood films, he thinks a time in which he’d get the creative freedom to make something interesting has passed (he and Wood discuss the halcyon days of the 1990s in which The Frighteners could be made). Grand Piano is unmistakably a distinct creative effort––a remarkable collaboration between writer, director, and performers working in unison.

<<Classical Hollywood: UNFAITHFULLY YOURS
The Delirious Alternate Reality of the Cloververse>>