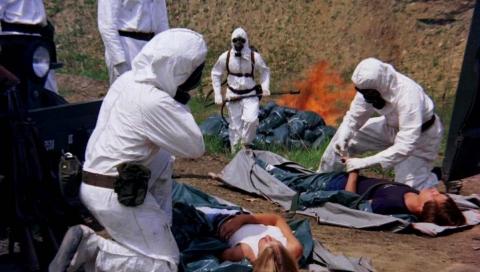 These notes on George A. Romero's The Crazies were written by WUD Film’s Vincent Mollica. A DCP of the film will screen as part of a tribute to the late director on Saturday, December 2 at 7 p.m. in our regular venue, 4070 Vilas Hall.

George A. Romero built a relationship with the distributor Cambist working on There’s Always Vanilla, his 1971 non-supernatural follow up to 1968’s Night of the Living Dead, and the company then approached him to work on a script entitled “The Mad People.” The script introduced the key plot elements of what would become The Crazies, which follows the military cover up of a leaked neurological weapon that drives inhabitants of a small town to become deranged and murderous. Cambist wanted a film that was more action driven than the initial screenplay, so Romero was brought in to rewrite and direct the film that they would help produce and distribute. Always the political satirist, Romero was careful to maintain aspects of the original script’s intellectual nature.

Like Night, The Crazies was a decidedly non-Hollywood production shot in Evans City, Pennsylvania, and although it was Romero’s first SAG film, they still largely used performers from the Evans City and Pittsburgh areas. Many volunteers round out the large film cast, including local high schoolers enlisted to play the white-suited soldiers that haunt the film. Indeed, the town raised issues with elements of the film, including its incestuous rape scene (which led to the crew being locked out of the high school) and, more dubiously, a scene of a black man stripping his clothes.

Once finished, the film endured a difficult release. Romero argues that although Night had been made five years earlier, it hadn’t entered its “re-release phase” and as a result The Crazies couldn’t use its success as a marketing hook. Either way, Cambist was fresh and inexperienced, and the film was sold incorrectly and placed in the wrong markets. “It’s a potboiler, a B movie, an action melodrama … and it needed to be played that way,” Romero remarked to Film Comment in 1979.  The few reviews it received at the time were mixed, although The New York Times and Variety provided downright scathing write ups.

A notable exception would come long after its release in Robin Wood’s political appraisals of Romero’s work, along with many other ‘70s horror films. Most notably, he offers great insight on The Crazies in his 1986 book Hollywood: From Vietnam to Reagan, where he describes it as an “ambitious and neglected work.”

In some ways, it’s easy to understand this mixed reaction, because The Crazies is a bewildering experience for many reasons. As far as the story, Robin Wood describes the way in which the viewer is never aware of who is “crazy” and who is not. Romero’s style is also overwhelming. “It’s a very brutally paced, unrelenting kind of a piece,” Romero said in an interview with Sam Nicotero while the film was still in production. In the film’s Blu-ray commentary, he describes its style as “staccato” and “cubist,” capturing images from many different angles, and he says, “I’d rather have 100 lousy shots than one great one.” The result is a feeling of constant freneticism, spread across scenes both of helicopter shoot outs and government bureaucracy.

The weight of the violence presented is also difficult to grasp. The film picked up on its political moment, following a grossly abusive and overreaching military presence in a small town. In a 1977 interview, Romero said, “At the time I made it, we were still in Vietnam and it was a very heartfelt problem, a part of the national consciousness and I don’t think anyone was ready to see that situation––even though it’s not a Vietnam film, it’s an anti-military film.” One of the most unsettling scenes of the movie occurs when a priest, deeply angered by the military’s evacuation of his church, lights himself on fire. It is an immediately recognizable visual reference to Thích Quảng Đức’s self-immolation, which Romero acknowledges in the film’s commentary. Women’s Wear Daily’s (very positive!) review also brings up the film’s relationship with the Kent State shootings. This parallel becomes especially poignant during the casual military gun violence that erupts during a riot at the high school towards the film’s end.

The key to the film’s satire lies in military violence, a theme that would be picked up in the great Day of the Dead, but even removed from a political context, the most unsettling element of the film is the prop that comes with the military. Each figure is dressed in white suit and gas mask, and many scenes feature these anonymous squadrons wreaking havoc across the Pennsylvania countryside. As Romero discusses in a 2014 interview with Sight and Sound, the different masked soldiers have their own personalities, much like the dynamically dressed every-person zombies of Dawn of the Dead. Romero claims, “I’m just always looking for things, you know? Like, this guy is going to walk through here, he might think, ‘Oh, look at those fishing rods. Why don’t I just grab ’em?’” It’s this touch which makes it difficult to truly be able to gauge the film’s military antagonists, who are at once both completely anonymous and unique personalities. It’s another example of the film pushing unanticipated layers on what a viewer might expect, in a way that bewilders and disturbs.

<<A World Turned Over: Wellman’s BEGGARS OF LIFE
Almodóvar's Ambivalence: TALK TO HER>>