The Maternal Voice in Almodóvar's THE FLOWER OF MY SECRET 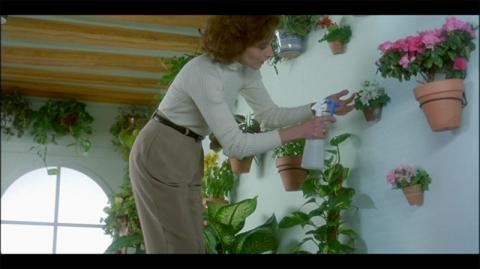 THE FLOWER OF MY SECRET

There is a strong continuity to the cinematic world of Pedro Almodóvar, and if you have been faithfully attending Cinematheque screenings every Sunday this semester (as I hope you have been), you could begin to predict what you will see onscreen: vibrant colors, camp sensibilities, a strong connection to Spanish cultural heritage, complicated and neurotic women.

After more than a decade of making films, Almodóvar was also widely recognized for his frank and oftentimes graphic depictions of sexuality, which provided an easy avenue for critics to link him to the tradition of European art house cinema. (two of his films have received X or NC-17 ratings when released in America.) The Flower of My Secret (1995) is often described as being a departure from his usual fare—less high camp and more pure melodrama. However, I see the film not as a departure but rather a deepening of themes that he had been addressing in his work since Pepi, Luci, Bom, and Other Girls Like Mom was released in 1980, including and especially the nature of artistic expression and what it means to be a woman and a mother.

Leocadia, the protagonist of The Flower of My Secret, is self-consciously a woman on the verge of a nervous breakdown. The actress who plays Leocadia (called Leo in the film, more on that name later) is Marisa Paredes, a member of Almodóvar’s stable of performers since she played one of the demented nuns in 1983’s Dark Habits. Paredes portrays Leo with intensity and a tortured weariness that befits a woman torn between two loves. Leo writes what she calls “pink novels”, trashy romances, under the nom de plume Amanda Grís but longs to write dark tales about tortured female psyches, and cites Djuna Barnes, Dorothy Parker, Flannery O’Connor, Virginia Woolf, and Edith Wharton among her literary influences. She calls these women “adventurous, suicidal lunatics,” a phrase that could be as easily applied to Leo at the beginning of the film. While she strives to break out of her Amanda Grís contract, the heavier weight on her mind is her absent husband Paco, a military officer involved in the Bosnian War. He doesn’t appear onscreen until the midpoint of the film, but his presence is felt throughout her apartment which is filled with pictures of him, one of them framed by a literal sun. By positioning Leo as trapped between the sentimental femininity associated with her pen name and the oppressive masculine energy of her husband, Almodóvar constructs a film that comments on the nature of authorship itself, both as it relates to Leo, and to himself as a director.

Although Almodóvar is never one to offer easy solutions to the complex moral and philosophical questions he poses, in The Flower of My Secret he does suggest that the maternal voice, the voice of his motherland, can help Leo to reclaim authentic emotion and construct a new path forward for herself as an author and as a woman. In the film Leo’s mother, Jacinta, is voiced by another of Almodóvar’s frequent collaborators, Chus Lampreave, whose usual zany presence is tempered by a tenderness that emerges in the relationship between Leo and her mother. At a crucial moment in the film, Lampreave’s voice guides Leo back from the brink of death and continues to lead Leo back to her roots by reciting a poem she wrote about their village in La Mancha. The poem conjures an idyllic countryside full of the sights and sounds of Jacinta’s past, and when she ends, declaring, “It’s my village,” the camera rests on a beautiful cobblestone street lined with white houses. Listening to her mother, Leo is reduced to tears, but the poem’s effect on her is not derived from sentimentality, but from a kind of painful nostalgia, full of longing and loss.

Almodóvar translates this brand of feminine, emotional authorship into the sounds and visuals associated with the mother’s village (based on Almodóvar’s own mother’s village). The lace that the country women sit and embroider all day long serves as a powerful visual metaphor for feminine creativity, especially in the scene where Almodóvar hangs the lace between the camera and the mother-daughter pair in the bedroom of their house. Its position suggests a shroud of feminine solidarity in loneliness, something Jacinta describes as being “a cow without a cowbell”. For the first half of the film, Leo is lost and alone, struggling against her relationship with her husband, and in her attempt to write more serious literature. The second half of the film finds Leo reconnecting with her fellow cows without cowbells, and beginning to find her own voice again through solidarity with these maternal figures. She even spurs the women to sing an ode to their motherland, joining them as they chant, “I’m from Almagro/I’m from fertile land/Where we make lace/cook eggplant.” The sounds of the needles clacking together recalls the sound of Leo’s typewriter and the sounds of flamenco dancing first heard over the opening credits. Speaking about the film, Almodóvar confirmed that Leo “returns to the bed and the house of her childhood, not to die, but to rediscover the origin of life. And to regain the strength to face the future.”

Almodóvar’s cinematic world is known for being built on pastiche, reflexivity, and testing the boundaries of good and bad taste. In The Flower of My Secret, he is still self-consciously creating a cinematic hall of mirrors, in which his characters and images quote from films like Casablanca, Psycho, and the 1981 melodrama Rich and Famous. However, in this film I think he’s also pointing the mirror towards himself, attempting to bridge the boundary between his own artistic voice and that of his female protagonist. Almodóvar is a highly literate director, and he gives his protagonist a name that means “I read” (“leo” in Spanish). The Flower of My Secret can be read as a meditation by a director trying to find his place in a world where the cinematic auteurs are largely men who etch their vision of the world onto celluloid. By reclaiming and celebrating the female voice, and especially the strength derived from the maternal voice, he suggests an authorship that may be embraced by male and female creators alike, not based in control, but in solidarity.

<<They're Coming to Get You: NIGHT OF THE LIVING DEAD
A World Turned Over: Wellman’s BEGGARS OF LIFE>>