Laurence Olivier and the HAMLET Problem 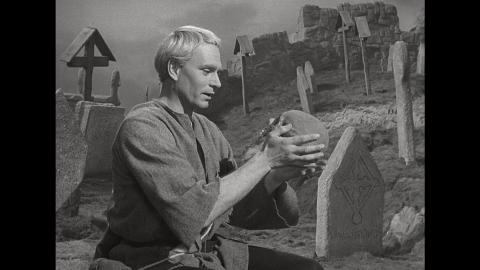 This essay on Laurence Olivier's movie of William Shakespeare's Hamlet was written by Erica Moulton, PhD candidate in UW Madison’s Department of Communication Arts. A 35mm print of Hamlet will screen at the Chazen Museum of Art on Thursday, November 10 at 6 p.m.. The screening is one of two adaptations of Hamlet presented in conjunction with the Chazen's presentation of the First Shakespeare Folio through December 11. A screening of Warner Bros' 1935 adaptation of A Midsummer Night's Dream will screen as part of our Olivia de Havilland retrospective on Sunday, November 13.

“This is the tragedy of a man who could not make up his mind.”

Laurence Olivier opens his 1948 film adaptation of Hamlet with these words, the only ones heard in the film that do not belong to William Shakespeare’s play text. Despite the simplicity of this statement, upon closer inspection, it proves to be more question than axiom. The “man” at the center of the statement, the young prince Hamlet, has posed many problems for critics, theatre directors, filmmakers, and actors since he first appeared on the page and stage around 1600.

Since then, he has been the favorite son of the literary and theatrical set, with every critic worth their muster penning an essay or book on Hamlet, and every actor waiting for their chance to cut their teeth on the role. In the 1910s, D.H. Lawrence said of the character: “I have always felt a strong aversion from Hamlet: a creeping unclean thing he seems….[the] character is repulsive in its conception, based on a self-dislike and spirit of disintegration.” Lawrence’s attitude towards Hamlet is extreme, but in describing a poster-boy for self-loathing and neuroses, Lawrence is not far removed from the 20th century project of aligning Shakespeare’s plays, particularly Hamlet, with the work of Sigmund Freud.

Freud’s influence on Olivier’s Hamlet is well-documented and highly evident to viewers even casually familiar with Freud’s writing. When Olivier stages a climactic argument between Hamlet and his mother Gertrude, with the two writhing and struggling on her bed, he isn’t insinuating anything. Psychoanalysis had edged its way into popular consciousness by the middle of the 20th century, with filmmakers like Hitchcock directing his ode to head-shrinking, Spellbound, in 1945. Olivier was certainly interested in laying the subconscious of Shakespeare’s characters bare in the film, but it is the way that he does this, how he shoots and frames the action, that ultimately makes this Hamlet both satisfying and occasionally frustrating.

While Freud gets referenced often in discussions of this film, of equal importance is Hollywood cinematographer Gregg Toland, whose collaborations with directors like John Ford, Orson Welles, and William Wyler in The Long Voyage Home, Citizen Kane, and The Best Years of Our Lives greatly impacted Olivier and his cinematographer Desmond Dickinson. Olivier is adept at using deep space to stage the conflicts both external and internal between Hamlet and the members of the court at Elsinore. When Hamlet is introduced, he sits at the end of a long table, foregrounded, with his uncle (now step-father) Claudius gazing imperiously at him from a throne in the background. Hamlet has become a stranger in his own home, and after receiving a shocking revelation from the ghost of his dead father, the old King Hamlet, he sets out on his journey of revenge. The camera roves, meanders, peeks around corners, eavesdrops on private conversations, and leads its audience through the labyrinthine castle Elsinore.

The cast of Hamlet are also subjects of scrutiny as they move through the dark and cavernous halls and winding stairwells. Felix Aylmer and a very young Jean Simmons are standouts in the cast, as the grizzled royal advisor Polonius and his daughter Ophelia, who is caught between her duty to her father and her love for prince Hamlet. This family drama mirrors that between the royal family, and loyalties between fathers and mothers, brothers and sisters, sons and daughters are tested. Olivier chose to pare down his text to only include the family intrigue, jettisoning the larger political themes of the play, as well as multiple characters. What is left is an intense psychological drama, a cat and mouse game that, like the title of Hamlet’s play-within-a-play, traps the characters, each brought down by a fatal flaw.

One question that Olivier grapples with is—whose flaw is it? Is it, as the opening declaration suggests, Hamlet’s inability to make up his mind that brings about the downfall of his family, and consequently, the entire nation of Denmark? Or is it the “stamp of one defect” each man (and woman) is cursed to bear that causes this unraveling of humanity? Olivier offers no easy answers, but the film, like the play, is a puzzle to get lost in again and again. It is not a tragedy—it’s the tragedy.

<<The Lost Cult of CATCH MY SOUL
Shakespeare at WB: A MIDSUMMER NIGHT'S DREAM>>