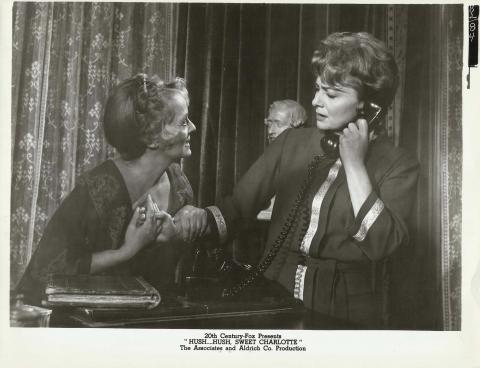 The lyrics to the theme song of Robert Aldrich’s delightfully disturbing 1964 film Hush…Hush, Sweet Charlotte sound like a lullaby from a bygone era, but in between the dulcet tones of Frank De Vol’s song hides a deadly message. The eponymous Charlotte, played with maniacal élan by Bette Davis, is an aging southern belle plagued by violent mystery from her past that has left her an agoraphobic deranged old women. She clings to the dilapidated Louisiana mansion left to her by her long dead father (an imposing Victor Buono in flashback scenes), refusing to yield the property to the construction crew who show up every day to tear down her house to make way for a highway (Bette Davis even fires a shotgun at the crew foreman played in a cameo by George Kennedy.)

The story has its roots in the southern gothic stories written by the likes of Flannery O’Connor or Carson McCullers, but the execution is pure psycho-biddy, with Davis and Agnes Moorehead hamming it up as mistress and housekeeper of Hollis house, screeching and mugging their way through the film. Olivia de Havilland shows up as cousin Miriam, who is tasked with talking reason into Charlotte. Moorehead, sporting a nearly incomprehensible southern dialect, plays Velma, who suspects that Miriam’s intentions may not be entirely honorable.

At the core of the film is a murder mystery, which Aldrich introduces in a lengthy pre-credit sequence. Flashing back to 1927, Charlotte’s father, Big Sam Hollis, is unhappy his young daughter has taken a married lover (Bruce Dern in one of his first roles). At a glamorous party, the lover is brutally decapitated and the murderer is never found. The townsfolk and, at times Charlotte herself, suspect that she murdered him when he told her he planned to go back to his wife (played in present day by Mary Astor). The shocking sequence is as disturbing today as it must have been to audiences in 1964. Back in present day, a group of children stand outside Charlotte’s house taunting her, singing:

The film was made for 20th Century Fox and planned to reunite costars Bette Davis and Joan Crawford after the success of Whatever Happened to Baby Jane?, which was also directed by Robert Aldrich. Hush…Hush was the first film produced by Aldrich’s newly formed Associates & Aldrich production company, and his entire family was involved in the production, with his younger children appearing as actors and his older daughter acting as script supervisor. Aldrich may have surrounded his cast and crew with his family, but one person who did not feel welcome on the set was Joan Crawford.

The legendary feud between Crawford and Davis came to a head during the making of Hush…Hush, and Aldrich sided with Davis. Halfway through production, a dissatisfied and bitter Crawford left the film, citing illness. Aldrich accused her of lying to get out of her contract, and even hired a private investigator to follow Crawford. The director was forced to shut down his production for three weeks in search of an actress to fill Crawford’s role. Davis suggested her old friend from Warner Brothers, Olivia De Havilland, but convincing her to take the role proved a challenge for Aldrich. De Havilland lived in a remote estate in Switzerland, which Aldrich traveled to and spent four days at her home cajoling her into taking Crawford’s part. Looking back on the decision, De Havilland remarked, “I can't say I regretted it, because working with [Davis] was special, but I can't say it was a picture I am proud to put on my résumé.”

Despite her reservations, De Havilland relented, and the film was reshot with her in the role of Miriam. Davis, Joseph Cotten (who plays Charlotte’s family doctor) and Aldrich reportedly toasted Crawford’s replacement on set with Coca-colas (a dig at Crawford, whose late husband was the chairman of Pepsi). There was not enough time to make new costumes, so many of the clothes De Havilland wears in the film are her own, and the cosmopolitan glamor and gentility she brings to the role perfectly offsets Davis’ unhinged look, all spindly braids and flowing nightgowns.

After a fraught production, Hush…Hush, Sweet Charlotte was released in December of 1964. Part horror film, part demented romance, part crime thriller, and a southern gothic tale to boot, it perplexed some critics but delighted audiences, grossing $7,000,000 at the box office. Bosley Crowther, chief critic for the New York Times called the film “grisly, pretentious, disgusting and profoundly annoying” in his review. He also mentions the rather eccentric acting styles, singling out Agnes Moorehead in particular, writing that she “is allowed to get away with some of the broadest mugging and snarling ever done by a respectable actress on the screen. If she gets an Academy award for this performance—which is possible, because she's been nominated for it—the Academy should close up shop!”

De Havilland gives by far the most restrained performance of the main cast. Her naturally warm onscreen presence belies the more sinister aspects of her mysterious character, making the film’s final twist both surprising and ridiculous. Who would have thought that Melanie Hamilton from Gone with the Wind would one day wield a severed head!

<<Humanity Amidst Austerity: Wim Wenders' ALICE IN THE CITIES
The Lost Cult of CATCH MY SOUL>>