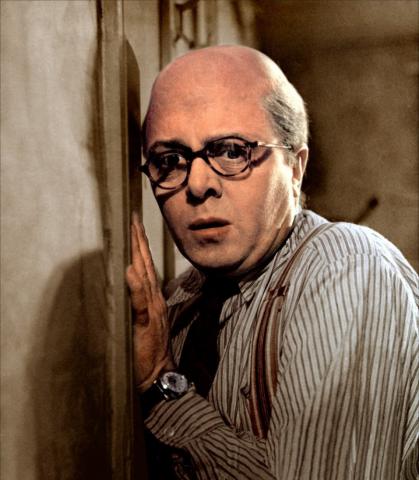 In 1950, Timothy Evans, resident of 10 Rillington Place, Notting Hill, London, was accused of murdering his wife and daughter. His downstairs neighbor, John Christie, was a key witness for the prosecution, and largely on the strength of his testimony, Evans was found guilty and hanged. Three years later, however, the bodies of six women were discovered in Christie's flat: three inside the kitchen walls, one – Christie's wife – under the floorboards, and two buried in the back garden. Christie confessed to rape and murder and was executed in 1953. The revelation that John Christie was a serial killer naturally cast doubt on his claims about Tim Evans. An inquiry into the Evans case upheld the original guilty verdict, but the British public refused to drop the issue. Newspaper campaigns and Parliamentary questions continued for years, and in 1961 journalist Lubovic Kennedy published a book on the events called 10 Rillington Place. In his account, Kennedy drew attention to a number of errors made by the police during the initial investigation, including the coercion of false statements and the overlooking or ignoring of crucial evidence – such as the human femur propping up the fence in the yard. For Kennedy, there was little doubt that Christie had committed the murders for which Evans had been unjustly hanged. In 1965, the High Court revisited the case again and posthumously pardoned Tim Evans. That same year, partly as a result of the Evans inquiry, Britain abolished the death penalty for crimes of homicide.

Such sordid events were ideal film fodder, but although the rights to Kennedy's book were purchased in 1962, it was nearly a decade before the project actually moved into production. By then, Hollywood was deep in recession, and 10 Rillington Place was the kind of film that appealed to nervous producers. First of all, it was topical; the constitutionality of capital punishment was under debate in the United States Supreme Court, while in the UK, many were arguing that the death penalty should be reinstated. True crime films were also in vogue, and 10 Rillington Place followed on the heels of In Cold Blood (1967), The Boston Strangler (1968), and The Honeymoon Killers (1969). In addition, it offered the type of adult subject matter that contemporary audiences seemed to favor and that had become even more prolific with the recent adoption of the ratings system. Not to be overlooked, of course, was the fact that such films could be made on the cheap.

So in the summer of 1970, with a budget of only $1 million, an adaptation of 10 Rillington Place went before the cameras. Clive Exton wrote the script, and Kennedy served as technical advisor. The Filmways/Columbia production was based at Lee International in London, a small inner-city studio that primarily handled industrial films and television commercials. The facility was inexpensive to rent but was also conveniently located near Notting Hill and the real Rillington Place. Although the current tenants of No. 10 refused access, No. 7 was empty, and using the actual(ish) dingy, run-down house of the Christie murders (this was before Notting Hill was revamped into a suitable meet-cute locale for Hugh Grant and Julia Roberts) helped give the desired air of realism. Indeed, the film paid meticulous attention to detail, even bringing in executioner Albert Pierrepoint, who had supervised the hangings of both Evans and Christie, to assure the accuracy of the execution scene.

This focus on authenticity was in keeping with director Richard Fleischer's detached, journalistic approach to the film's subject matter. Fleischer, who also directed The Boston Strangler, was no stranger to psychological dramas, to the point that Variety considered his work on 10 Rillington Place directorial typecasting. For this particular true-crime film, Fleischer utilized a "determinedly cool," understated style.

Critics agreed that Fleischer had gotten extremely strong performances from his cast – particularly Richard Attenborough as John Christie and John Hurt as Tim Evans. At the time of the film's release, Hurt's performance was deemed the stand-out one, and he was nominated for a BAFTA in 1972. Variety praised his "remarkably subtle and fascinating performance" while The Independent Film Journal claimed that "With each scene Hurt seems to tread new ground offering a characterization that is as deeply understandable as it is refreshingly devoid of all the standard cliches."

But Attenborough's portrayal of John Christie was only slightly less enthusiastically received, and over the years it has come to be seen as one of his definitive performances. Attenborough had actually worked with Fleischer before, when he was pulled in as a last-minute replacement for Albert Blossom, the circus owner in Fox's roadshow musical Doctor Dolittle (1967). Though not known as a song-and-dance man, Attenborough's exuberant, show-stealing performance of "I've Never Seen Anything Like It" about the two-headed Pushmi-Pullyu won him a Golden Globe. Dolittle itself, however, was a box office flop – one of the many big-budget productions that created Hollywood's recession – and Fleischer's direction of the musical has been heavily criticized. But Attenborough enjoyed working with Fleischer, finding him extremely adept at putting his actors at ease – a skill that was likely appreciated even more on 10 Rillington Place. Attenborough claimed that John Christie was "the most difficult, disturbing role I've ever played." In fact, he'd only accepted the part because he believed the story was a "devastating statement on capital punishment" and he'd always had a penchant for socially critical projects. The difficulty of playing a serial killer was exacerbated by the fact that Christie was, by all accounts, incredibly dull – as one critic put it, "a man who was in every way except one the quintessence of nothingness." Thus Attenborough very effectively plays Christie not as a lunatic, but as an "insidious, ingratiating schemer."

10 Rillington Place remains a chilling thriller, all the more so for eschewing sensation in favor of restraint. And Attenborough so thoroughly disappears into his loathsome character, that it's perhaps comforting to remember that the versatile actor could also cut a jolly jig: