MEET ME IN ST. LOUIS: Notes on a Musical Classic 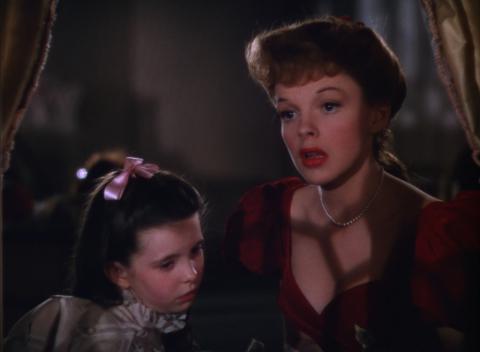 Meet Me in St. Louis is “the answer to any exhibitor’s prayer,” gushes the Variety review for this 1944 film. With “bursting vitality,” Bosley Crowther of The New York Times adds, “the Smiths and their home, in Technicolor, are eyefuls of scenic delight.” A turn-of-the-century story about an affluent Midwestern family anticipating the St. Louis World’s Fair, the film was a smashing success at the box office and inspired other Hollywood studios to produce similar musical period pieces.

Despite its favorable outcome, Meet Me in St. Louis’ production kicked off in a conflicted atmosphere. The film was a risky endeavor. Producer Arthur Freed and Vincente Minnelli, his director of choice, liked the source material – a novel by Sally Benson, based on her New Yorker short stories – finding it an “[affectively warm] evocation of a bygone era, despite its sentimental nature,” as Emanuel Levy puts it. But studio head Louis B. Mayer had reservations. Mayer’s script reader, Lillie Messenger, convinced him to go ahead with the film, however, by reminding him that the story’s content would likely resonate with contemporary audiences: “The script is a fine kind of Americana, and it was about the family. Don’t forget that the country is at war” (quoted by Levy).

Minnelli’s favorite sequence in the film was also under attack at various stages of the production process. The Halloween revelries—during which Tootie Smith (Margaret O’Brien) successfully “kills” an intimidating neighbor by throwing flour in his face and is deemed “the most horrible” by the older children (a high honor)—were almost eliminated from the film. Minnelli recounts the situation in an interview with Jerome Delamater: “The picture was long and everyone said, ‘The only thing that can be cut out entirely is the Halloween number.’ I was beside myself because that’s one of the reasons I wanted to do the picture so badly against the whole studio. We ran the film for Freed and all the people involved, and after the picture was run, Freed stood up and said, ‘It’s not the same picture at all.’ It became just a boy and girl story whereas Meet Me in St Louis is the story of a family.” So the Halloween revelries stayed, and one of Esther’s (Judy Garland) numbers – “Boys and Girls,” a song performed at the unfinished World’s Fair grounds after the trolley ride – was cut instead. Joseph Breen also had objections to the Halloween portion of the script when it arrived at the Hays Office for Production Code approval. Breen thought it was unacceptable to portray children throwing stolen furniture and doormats onto a fire; in the final film, the burning furniture we see has presumably been donated by willing neighbors, playing along with the children’s morbid celebrations.

Minnelli’s elegant camera movements, subtle staging, and bold use of Technicolor in Meet Me in St. Louis established him as a new force to be reckoned with in the Metro-Goldwyn-Mayer filmmaking community. And despite Judy Garland’s reservations at once again playing a younger character, the film introduces an adult, glamorous side of the actress to audiences who had previously known her in roles that emphasized her youthful, childlike qualities. Meet Me in St. Louis has become one of MGM’s most beloved musicals, with such memorable numbers as “The Trolley Song” and Garland’s moving rendition of “Have Yourself a Merry Little Christmas.” “In the words of one of the gentlemen,” Crowther writes, “it is a ginger-peachy show.”