THE LITTLE SHOP OF HORRORS: Lightness in the Face of Mortal Horrors 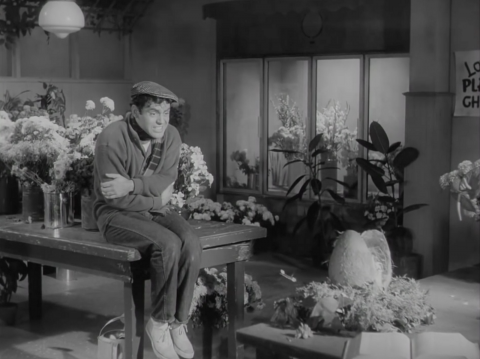 THE LITTLE SHOP OF HORRORS

Mr. Mushnik’s flower shop is a desperate, straining sort of place, the kind of dying business that litters the bad part of town. It’s packed floor-to-ceiling with ragged blossoms, frumpy stalks, and signs that shrilly entreat the wandering bargain-hunter: “LOTS PLANTS CHEAP,” “We don’t LETTING YOU SPEND so much.” The same customers show up each week with the same complaints, from the aptly-named Mrs. Shiva (always in need of a funeral arrangement for an endless line of dying relatives) to local dentist Dr. Farb, who’s never above haggling for a cheap office plant. The frazzled proprietor Mushnik (Mel Welles) has only two employees holding the place together, and Audrey (Jackie Joseph) and Seymour (Jonathan Haze) are sweet enough kids but both a few blooms short of a bouquet. Life seems hopeless for all involved. That is, until Seymour brings in a shocking horticultural discovery that starts an uncontrollable flow of cash - and blood - all the way down Skid Row.

Roger Corman’s surprise B-movie hit The Little Shop of Horrors (1960) is zippier, zanier, juicier, and darker than it has a right to be; the film was reportedly shot in just two days and one night. Certainly, the production crumbles around the edges, with its jumpy transitions and endearingly home-made set pieces (particularly the carnivorous Venus Flytrap at the film’s center), but the spit, glue, and papier-mache of it all just adds to the fun. Corman had just finished his previous feature in record time, a satirical cheapie called A Bucket of Blood (1959) about a waiter who stumbles into artistic success by presenting his accidental murders as sculptures. Endeavoring to re-create the speedy production on a bet, writer Charles Griffith quickly re-wrote a new story onto the plot bones of Bucket, and most of the crew got right back to work shooting on an empty set left behind in the same building. Corners were cut at every turn, from the sitcom-like camera setups, to the limited rehearsals, to the hiring of local bums as production assistants.

Indeed, as one of the dirtiest and fastest efforts in Corman’s oeuvre, Little Shop finds extra charm in weirdness that never got a rewrite. Griffith’s florid, pulpy, off-the-wall writing shines throughout, beginning with a voice-over welcome to Skid Row, where “the tragedies are deeper, the ecstasies wilder, and the crime rate is considerably higher than anywhere else.” The bumbling, underdeveloped detectives Joe Finke and Frank Stoolie (satirizing Dragnet’s Joe Friday and Frank Smith) offer some of Little Shop’s funniest fake-noir dialogue. Nonsensical words and phrases become perfect character flourishes: “Isn’t it empirical?” squeaks Audrey, admiring the growing plant-monster, dubbed Audrey Jr. “It grows like a cold sore on the lip,” answers a pleased Mushnik.

The film’s most famous cameo comes from a young Jack Nicholson, chewing up the scenery as a masochist at the dentist’s office who eagerly greets the drill with an orgasmic cry of “Don’t stop now!” There’s bite and delight in every pitter-patter exchange amongst this menagerie of creeps, aided by gamely bizarre performances. Welles makes the most of his expressive face, delivering Mushnik’s barbs in a loud, powerful Turkish-Jewish accent. Haze’s weak, clumsy Seymour is exactly the kind of man who might be manipulated by a hungry plant. Griffith himself steps into several minor roles, including voicing Audrey Jr. itself with great nasal relish. And as in all Corman’s best B-flicks, the supporting characters often lend the best color and sharpen up the story. Take regular customer Fouch (played by Corman collaborator Dick Phillips), who munches on carnations for breakfast. “Oh! Such a thing, eating flowers!” exclaims Mrs. Shiva. “Hey, don’t knock it till you try it,” Fouch dryly replies—and in a nice twist of irony, it’s the plant-eating man who first encourages Seymour to nurture and display his man-eating plant. Indeed, many of Griffith’s puns gesture to the danger of the burgeoning blood-sucker so quickly that they’re easily missed; look no further than dimbulb Audrey’s love of “Caesarean salad.”

Though there’s fun and irony to be had amongst the mess, Little Shop carries some despair in it too (right down to its abrupt and gloomy ending). We often miss the heftier themes that undergird “light” film fare, from mid-century cheapies to teen movies to romantic comedies; these works too are built upon complex thematic cornerstones like ambition, moral ambiguity, and mortality. Indeed, it could be said that the success of the B-film lies in its immediate appeal to a more visceral place - a place where the audience swings wildly between fear, pleasure, sadness, and joy - and Little Shop occasionally pokes a sharp tendril into this place between its lighter moments. If Skid Row is all decay, Audrey Jr. represents growth: a chance for Seymour, Audrey, Mushnik, and the others to experience the beautiful, unexpected, and new. But Little Shop gradually reveals, particularly through Seymour’s tragic arc, that possibility always has a price. Raised by a hypochondriac mother, too shy to approach the girl of his dreams or escape his dead-end job, Seymour sees Audrey Jr. as a beacon of hope in a dark and grimy world. However, as he is coerced into providing blood to help it grow (and bring in money for Mushnik’s shop), Seymour finds himself repeatedly making the choice to kill. Others around him similarly find themselves torn between the glamor of the giant talking plant, and the terrible secret it holds in its roots and buds.

Though the 1982 stage musical adaptation of Little Shop and Frank Oz’s 1986 remake lean more heavily into these dark themes, they miss the magic Corman creates in nimbly dashing between these extremes; there’s something particularly delightful about the original Little Shop’s lightness in the face of mortal horrors. Though Audrey Jr.’s prop design leaves much to be desired, the image of its victims “growing” from its bulbs is particularly inspired and haunting. This lively, weird, and electric little movie snakes its vines around our ankles while we’re laughing, overcoming its modest resources to find surprising depths in its mad brand of black comedy.

<<The Swoon and Doom of DRAG ME TO HELL
A Cinema of Beautiful Devastation: ALL THAT HEAVEN ALLOWS >>