A Cinema of Beautiful Devastation: ALL THAT HEAVEN ALLOWS 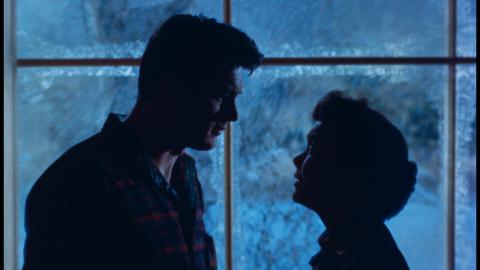 ALL THAT HEAVEN ALLOWS

The reevaluation and reappreciation of Douglas Sirk happened only a few years after the release of his run of melodramas in the 1950s that included Magnificent Obsession (1954), Written on the Wind (1956), and of course, All That Heaven Allows (1955). While American critics cast aspersions on the heightened emotions and expressionistic style of Sirk’s films with Universal, across the Atlantic the critics and filmmakers that would soon form the French New Wave glommed on Sirk’s eloquent and emotional cinema. Only four years after the release of All That Heaven Allows, Jean-Luc Godard was singing Sirk’s praises in the pages of Cahiers du Cinema, writing that his 1958 film A Time to Love and a Time to Die had “set his cheeks on fire.” Sirk’s status as an auteur of the highest degree was solidified by a series of interviews he gave with the French cinema journal and a piece written by Jean-Luc Comolli in 1967. American critics and scholars caught on by the 1970s and now forty years later, Sirk’s films are universally acknowledged to be among the most impressive films to ever be produced within the Hollwood studio system.

The irony of Sirk’s critical reappraisal is that the facets of his filmmaking that were counted against him at the time of his films’ initial release—their status as ‘women’s pictures’ or ‘weepies’, their use of artifice and stylization, their heightened emotions—are now the traits that are singled out for celebration. All That Heaven Allows exhibits the characteristic Sirkian touches, including its melodramatic plot: it follows a wealthy middle-aged widow played by Jane Wyman who forges a relationship with her gardener (Rock Hudson) and faces the scorn of her callous grown children (named Kay and Ned) and the country club denizens as a result. Wyman and Hudson worked with Sirk the year before in Magnificent Obsession and proved a popular enough onscreen pairing for Universal to greenlight a reunion right away. Both actors give sensitive, nuanced performances, but as with all of Sirk’s films, everything within the frame is given equal weight to what an actor may be doing in any given shot. In All That Heaven Allows, everything from the art direction to the lighting to the use of props is gorgeously calibrated to convey the inner life of Jane Wyman’s character, Cary Scott.

Film is a communicative artform, but Sirk is unique in how carefully he uses every inch of the frame, including the corners and the edges, to tell the story. As is his custom, reflective surfaces play an important role in conveying the psychological dispositions of characters. A standout moment from early in the film occurs when Cary stares into her vanity mirror as her children come into her bedroom. The camera pushes in and lingers on the reflected reunion as she goes to greet them, suggesting that her relationship with them is more of a façade than it initially seems. Reflected surfaces form a motif throughout All That Heaven Allows, culminating in one of the most devastating images ever produced in the history of cinema. I won’t spoil the moment for those who have not seen the film, but suffice to say, Sirk’s position on the rise of television is not left ambiguous.

The coordinated use of color palettes is also a treasured feature of the film. The saturated jewel tones of the country club set (Agnes Moorehead is introduced in a ravishing cobalt blue sweater set) are played against the earthen palette of Rock Hudson’s Ron and his eccentric, country-dwelling friends. The most expressionistic use of color and lighting comes when Cary is confronted by Ned and Kay about her plans to marry Ron. Each of her son’s verbal threats of abandonment register on Cary’s face, as the light sculpts its contours, highlighting her devastation. In the next scene, Kay weeps into Cary’s arms and begs her not to marry Ron while the kaleidoscopic light of a circular window throws unnatural oranges, pinks and greens over the two women. Sirk’s minute attention to detail makes for a thrilling viewing experience. In any given scene, you can be assured that he gave equal thought to the ice forming on the window panes behind Cary and Ron and to the words they are saying to each other. But to Sirk, both of those things are necessary and integral to communicating Cary’s emotional journey.

There is a sense that audiences nowadays are too sophisticated for melodrama. Dedicating a level of artistic rigor to the seemingly small, intimate problems of everyday life, in this case the romantic affairs of a middle-aged woman, is nearly unheard of in the Hollwood of today. All That Heaven Allows is also steeped in the social mores of the Eisenhower era, rendering the impediments to Cary and Ron’s love (their age and class difference) absurd to contemporary viewers. Upon revisiting the film, however, I found that the situations it presented were especially relevant to modern life. As a society that experiences life mediated by reflected surfaces that constantly invite judgement, we could all probably use a dose of Ron’s brand of transcendentalist-inflected individualism.

<<THE LITTLE SHOP OF HORRORS: Lightness in the Face of Mortal Horrors
Fassbinder's Spin on Sirk: ALI: FEAR EATS THE SOUL>>