Life Could Be a Dream: MULHOLLAND DR. 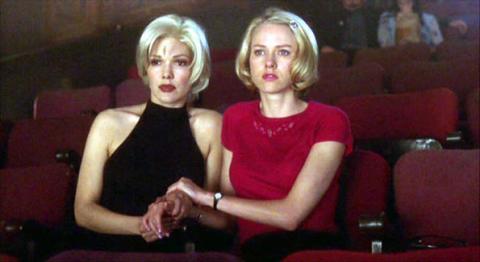 There is a certain stratum of film that occupies such rarefied space and achieves such transcendent qualities that when asked to proffer the reasons for its perceived greatness, one can find oneself at a loss for words. Some films’ raison d’etre are far easier to pinpoint: impeccable performances, a perfect script, an infallible audiovisual aesthetic. Mulholland Dr. contains all of these elements and more, but to explain its personal significance seems almost futile. And in this way, the film becomes analogous to a dream one has woken up from and cannot quite place, an abundantly appropriate metaphor for those who have seen the film or are familiar with David Lynch’s work.

Mulholland Dr. began its journey as the pilot for a television series, continuing the complex negotiation Lynch’s career has had between the dual worlds of film and television. His first dalliance with television, of course, began in the ‘90s with what became perhaps his most widely beloved work, Twin Peaks, a show that Lynch relaunched on Showtime in 2017 to great acclaim. Indeed, the genesis of Mulholland Dr. was as a spin-off of Twin Peaks, centering on Audrey Horne as she moves from the Pacific Northwest to sunny Los Angeles in an attempt to become a star on the silver screen.

The spinoff idea morphed into an original property, though still one imbued through and through with Lynch’s artistic DNA. Mulholland Dr. retained this basic core of “Hollywood as Dream Factory" and the film ostensibly follows Betty Elms (Naomi Watts), an aspiring actress seeking to make it big in Tinseltown, and her entanglement with Rita (Laura Harring) who at film’s beginning suffers a car crash on the titular Mulholland Drive that spurs a case of amnesia. The mystery of who “Rita” is becomes the narrative drive of the bulk of the film, but it is not the story proper that accounts for Mulholland Dr.’s significance. Rather, it is Lynch’s treatment of such tried-and-true material that makes up its singularity.

Mulholland Dr. forms an interesting case within Lynch’s greater oeuvre. At once, it marks many continuities. From its very title, we can surmise its fascination with one of Lynch’s favorite motifs, that of the road. In Blue Velvet, we can think of the car rides with Frank Booth that transport us from idyllic suburbia to the seedy underbelly it conceals. Wild at Heart was a surreal road movie that made phantasmagoria out of Americana. Lost Highway, probably the closest aesthetic and thematic precursor to Mulholland Dr. in Lynch’s filmography, used the road as a psychoanalytic bridge between characters’ constantly shifting identity. Two years before the release of Mulholland Drive, Lynch would rework the road film in his most obviously humanist work, The Straight Story.

In Mulholland Dr., the titular road provides a sense of locality. Lynch marks the territory of Los Angeles as his area of play. In an early scene, we are afforded not only a glimpse of the Mulholland Drive street sign, but that of another famous Hollywood signifier, that of Sunset Boulevard. Here begins the highly cinematically reflexive and self-referential quality of the film that extends to the naming of characters (Rita takes on her name after seeing a poster of Rita Hayworth in Gilda), the narrative focus on filmmaking as focalized through Adam Kesher (Justin Theroux), the deliberate nods to classical Hollywood noir (there is a particular debt to Otto Preminger’s Laura), and perhaps best represented through one of the most astounding scenes in Lynch’s entire filmography, the Club Silencio sequence.

The Club Silencio sequence marks an inflection point in the film where Betty and Rita find their greatest spiritual bond, one that is analytically broken down by each successive scene. They stumble upon a curious sort of performance where an emcee explains its inherent artificiality. Its closest analogue in art is the infamous René Magritte work The Treachery of Images. The famous phrase “ceci n’est pas une pipe” or in English “this is not a pipe” is echoed by Mulholland Dr.’s “no hay banda” or, in English, “there is no band.” The scene climaxes with a lip-sync performance of a Spanish version of Roy Orbison’s song “Crying” (a callback to the use of Orbison’s “In Dreams” in a pivotal scene of Blue Velvet) that despite the constant intimations of its artifice and construction, become desperately moving to both the diegetic audience and the film viewer, as well, forming a potent metaphor for the art of filmmaking in the process.

Nostalgia forms a crucial component to Mulholland Dr., Lynch’s own nostalgic remembrances of signifiers of his cultural past (the opening dance party sequence, kitschy pop tunes like “I’ve Told Ev’ry Little Star”) become mediated through the imagined remembrances of who becomes revealed as the film’s “true” protagonist, Diane Selwyn (Naomi Watts). In her dream-construction, Hollywood is a place where ingenues can become starlets. A place where through luck, grit, and determination, one can find themselves magically in the pictures. In this universe, one need not sacrifice love for career or vice versa. Rather, both can be consummated in one fell swoop. The revelation in the final sections of the film of Betty and Rita as dream-screens and how disparate the lives of these dream-surrogates and their “real-life” referents transform the film from a celebration of Tinseltown to a damning critique of Hollywood toxicity. As critic David Thomson puts it, Mulholland Dr. is not only “about itself and the dual process of dreaming and driving – it’s also one of the greatest films ever made about the cultural devastation caused by Hollywood.” Silencio.

<<Cinematalk Presents 70 Movies We Sawn in the 70s: THE TEXAS CHAIN SAW MASSACRE
The Nasty Business of POSSESSION>>