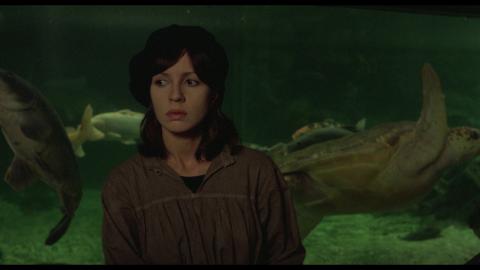 The following notes on Jacques Rivette's Duelle (1976) was written by WUD Film's Henry Witt. The Cinematheque's New French Restorations series concludes with a DCP of Duelle on Saturday, December 8 at 7 p.m. in our regular screening venue, 4070 Vilas Hall. Admission is free!

“The ambition of these films is to discover a new approach to acting in the cinema, where speech, reduced to essential phrases, to precise formulas, would play a role of “poetic’ punctuation.” - Jacques Rivette on his
"Scenes of Parallel Life" movies.

“I believe you were lured into a trap. The story was only a pretext.” - Viva, Duelle

Jacques Rivette’s decision to follow the ambling, improvisational yarns of his early 1970s films (Out 1, Céline and Julie Go Boating) with the scripted and genre-inflected Duelle could at a glance be mistaken for a retreat from the prior films’ playfully unconventional production methods. The plot synopsis lays out a clear—if unusual—central conflict, “Two goddesses battle over a magic diamond.” The transposition of myth and fairytale to a contemporary Paris setting has precedent in Cocteau, and invocations of film noir provide comfortable aesthetic and narrative reference points. As the quotes above suggest, however, these anchors are merely the framework for something far more challenging and ineffable.

A feature that was meant to be consistent across all four films (of which only two, Duelle and Noroît, were completed as conceived) in Rivette’s “scènes de la vie parallèle” cycle was on-location, live, improvised musical accompaniment, creating what he called a “simultaneous musical space.” Any given scene, then, would capture the unpredictable and (hopefully) fruitful combination of two related but separate performances happening in parallel. One of the pleasures of watching Duelle is experiencing genuinely unexpected moments of formal unity, when music intrudes upon an unfolding scene at just the right time.

One such revelatory moment occurs when the night porter turned amateur detective Lucie, having tailed Bulle Ogier’s baton-wielding Viva to a secluded casino, is found out and must herself begin improvising a reason for being where she doesn’t belong. Hermine Karagheuz, acting as Lucie, turns and reacts to the sudden entrance of the piano from a dimly lit corner in the background as she begins to spin a lie for Viva, the only other person in the room. Viewers might also be surprised to realize they hadn’t noticed Jean Wiener tucked away until the first note. A light shines on him in an even more drastic break from any naturalistic motivation for mise-en-scène .

Though always on-location when providing accompaniment, Jean Wiener and his piano are only sometimes visible on-screen. His appearances vary from having entirely sensible diegetic  motivations—performing at a nightclub, for instance—to the nonsensical, like when he appears midway through a private hotel room conversation between Viva and Pierrot. This slippery approach to the diegesis reflects the film’s handling of realism and fantasy generally.

Formally, the use of real-world locations, direct sound, and cinematographer William Lubtchansky’s handheld camerawork lends itself to comparisons with documentary filmmaking, but there is just as much noir and B-movie in Duelle’s DNA. The two goddesses are femme fatales elevated to the status of trickster deities, and there are numerous references to classic film noir. A rendez-vous in a lush garden channels The Big Sleep’s greenhouse, a row of lockers housing the film’s MacGuffin recalls Kiss Me Deadly, and there is even a shadowy aquarium torn right from The Lady From Shanghai. There’s also kinship with the Val Lewton horror movies and their enveloping shadows, though it was specifically Mark Robson’s The Seventh Victim with its quotidian setting and cult murders that Rivette screened for the cast and crew. If the language of cinema is the language of dreams and fantasy, these references conjure the fantasies of films past.

The reduction of speech to “essential phrases” that Rivette envisioned for the Scenes of Parallel Life in Duelle’s case involves many direct quotations from Jean Cocteau. One of the tragic pawns in the goddesses’ battle, the ticket girl Elsa, quotes an iconic line from the Bresson-directed, Cocteau-scripted film Les Dames du Bois de Boulogne, and various cryptic statements related to the supernatural elements are lifted from an obscure Cocteau play titled The Knights of the Round Table. Most of the quoted phrases are too cryptic to make much sense of narratively, but the story is only a pretext anyway. The illusion of Rivette’s cinema is that the right combination of gesture, light, shadow, and improvised notes on the piano can create miracles, right in the middle of everyday Paris. “Two plus two no longer make four.”