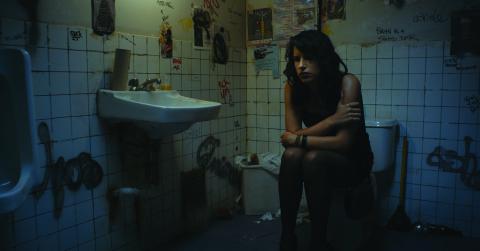 Appropriate Behavior will have its only Madison-area theatrical screening on Friday, November 21, at 7 p.m. in the Cinematheque's regular venue, 4070 Vilas Hall.

When Desiree Akhavan emerged as a breakout star at this year’s Sundance Film Festival with her debut film Appropriate Behavior, few in the film world may have been aware of her.  That’s because, like an increasing amount of budding auteurs, writer/director/actress Akhavan honed her craft online.  The Slope, her self-produced, semiautobiographical comic web series about “superficial, homophobic lesbians” had a twenty episode run on Vimeo stretching from August 2010 to June 2012.  Running approximately five minutes apiece and generally structured around a single scene, these vignettes are where Akhavan refined her promiscuous, politically incorrect sensibility—and frequently led to her being branded “the next Lena Dunham,” an inevitable comparison Akhavan had already reckoned with while still in preproduction on Appropriate Behavior.

Co-created by and costarring her then-partner, Ingrid Jungerman, The Slope is an amiably knowing takedown of Park Slope minutia (at one point, Desiree argues that she and Ingrid can’t break up because they “still have a month left on their CSA”), with a more biting slant on LGBTQ politics.  In one of the series’ most daring episodes, the duo spoofs Dan Savage’s “It Gets Better” campaign, then a viral sensation perceived as untouchably benevolent.  Akhavan reveals that she was bullied not because of her sexuality, but because she was “very ugly and a little bit fat,” and the pair offer a sarcastic checklist for gay kids who don’t want to just wait around for things to get better, but actually want to take steps to “make things better.”

Episode 5: "It Gets Better?" from The Slope on Vimeo.

The Slope’s Kickstarter-funded second season ramped up the production values slightly (some episodes even spread out to contain more than one scene), acquiring niceties like a ten-second theme song and a producer (Frances Bodomo, director of the short Afronauts, which was featured at the 2014 Wisconsin Film Festival).  It earned positive mentions in publications ranging from Indiewire to Out to Slate to The Guardian, landed the creators a spot in the 2012 class of Filmmaker Magazine’s “25 New Faces of Independent Film,” and played the prestigious Rotterdam Film Festival.  “Primary Care Giver,” a miniature satire of helicopter parenting featuring Michael Showalter (then Jungermann’s NYU professor), was featured on The Huffington Post.

Season 2, Episode 3: "Primary Care Giver" from The Slope on Vimeo.

Akhavan is hardly the first indie filmmaker to have cut her teeth in bite-sized chunks online; in fact, she may be part of a burgeoning wave. Early in his career, Joe Swanberg created web series commissioned by pop culture sites, like Nerve and Spout.  More recently, Matt Johnson’s endearingly goofy web series Nirvana The Band The Show served as the staging ground for his stylistically similar feature The Dirties, which won the Grand Jury Prize at the 2013 Slamdance Film Festival.

Nirvana the Band the Show: Episode 1 from Rich Williamson on Vimeo.

For young filmmakers, web series have tended to serve as industry calling cards for much bigger, paying jobs: Johnson is adapting Encyclopedia Brown for Warner Brothers, and Akhavan will has been added as a cast member to the upcoming fourth season of Girls.  However, filmmakers who have been around the block may envy the creative freedom offered by a low-stakes web series—Showalter’s frequent collaborator (and Akhavan’s fellow Sundance 2014 alum) David Wain uses the form as a creative refresher between higher profile projects with his delightfully loopy, star-studded singles saga Wainy Days.