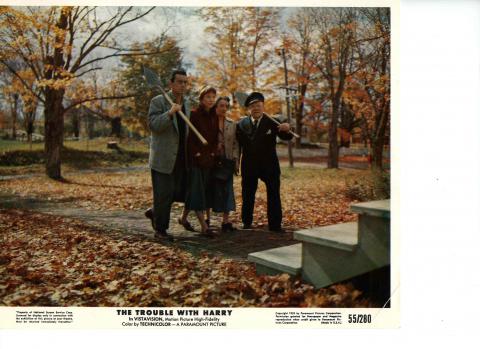 The Trouble With Harry is a bit of an outlier in Alfred Hitchcock's oeuvre. Though ostensibly about the discovery of a dead body, the film is really a droll - if somewhat macabre - romantic comedy, lacking in the suspense typically associated with the director's most celebrated works. Harry was also a commercial failure upon its release in 1955, and this seems to have played a role in the comparative lack of attention the film has received. In more recent years, however, critics have started to reevaluate the film, and rightly so.

Based on a 1949 novella by English writer Trevor Jack Story, The Trouble with Harry tells of a group of townspeople who find a corpse in the woods - that of the titular Harry. Each believing they are in some way responsible for Harry's death, they conspire to hide the body until a solution can be reached. In the midst of the discussions of mortality and murder that ensue, love blossoms and couples are formed. Paramount considered adapting the novella in 1950, but thought the scenario too whimsical and unworldly for an effective screen translation. The story's understated dark humor and romance appealed to Hitchcock, however, and he bought the rights - anonymously, in order to ensure a low price. Hitchcock had a multiple picture deal with Paramount at the time, and though the studio was still skeptical about the property's commercial potential, they were willing to bet on the director's reputation and put up a budget of $1 million.

To write the film, Hitchcock selected his favored screenwriter of the moment, John Michael Hayes. Hayes had just finished Rear Window (1954) and To Catch a Thief (1955), to much acclaim, and would follow up Harry with the remake of The Man Who Knew Too Much (1956). (But a disagreement over screen credit on Man severed Hayes' personal and professional relationship with Hitchcock permanently). Hayes' penchant for character development and sharp dialogue made him a good fit for Harry, which is peopled with quipping eccentrics. Moreover, Hitchcock had decided to set the film in a small town in New England in the fall, and this appealed to Hayes, who had grown up in that part of the country. To ensure the authenticity of the desired autumnal foliage, locations were selected in Craftsbury and Morrisville, Vermont, and though Hitchcock wanted to shoot the entire film there - setting up a make-shift sound stage in the American Legion building in Morrisville - uncooperative weather drove the crew back to California, bags of real Vermont leaves in hand.

Upon its release in October of 1955, Harry received mixed reviews; some critics found it slow and strained, others thought it sophisticated and funny. Though it performed decently overseas, it was a flop in America and ultimately did not recoup its costs. At first glance, we might understand why. Harry has no big-name stars and no pre-sold story; it had only Hitchcock's name to market it. And this might not have been a problem, had Harry been something more typical of the Master of Suspense. But as film critic Peter Bradshaw hypothesizes, while audiences expected Agatha Christie, Hitchcock gave them Waiting for Godot.

Aesthetically speaking, The Trouble with Harry has a great deal to recommend it. It features lush VistaVision cinematography by long-term Hitchcock collaborator Robert Burks; solid editing from Paramount veteran Alma Macrorie (nominated for an Oscar for her work on The Bridges at Toko-Ri [1954]); and a jaunty, ostinato-based musical score from Bernard Herrmann. This was the first of seven soundtracks Herrmann did for Hitchcock over the course of their 11-year relationship, and it remained the director's favorite. Harry is also well cast, making good use of stalwart character actors Mildred Natwick, Mildred Dunnock, and Edmund Gwenn, and featuring an early performance from Jerry Mathers - two years before he would become beloved throughout America as Theodore "The Beaver" Cleaver. Most notably, though, Harry also marks the screen debut of Shirley MacLaine, who was reportedly cast after associate producer Herbert Coleman and unit production manager Doc Erickson took a break from location scouting to see The Pajama Game on Broadway. As luck would have it, dancer Carol Haney was out sick, and MacLaine, her understudy, was on that night.

It is ultimately the film's tone, however, that has really started to attract some critics back to The Trouble with Harry, ironically, since it was tone that deterred Paramount from adapting Story's novella in the first place and it was the tone that seemed most off-putting to contemporary reviewers and audiences. Harry is fairly frank in its discussion of death and sex - at least by 1955 standards. Certain concessions had to be made to the Production Code Administration, of course, to ensure the film's release: for example, Jennifer's son is illegitimate in the novella but not so in the film, and the film eliminates the novella's rather perverse scene where Harry offers to make love to Jennifer while pretending to be Robert - his dead brother and Jennifer's former lover. Nevertheless, double entendres and allusions abound, and there are explicit discussions about nude portraits and the scandalous double bed. More noteworthy, however, is the way characters discuss their love lives and their potential for murder with the same nonchalance and practicality. Death and sex are completely intertwined in the film and neither seems to be cause for much fuss. Harry's fictional town of Highwater, Vermont thus comes across like a strange dreamscape, populated with witty sleepwalkers. Indeed, it is this eerie, somnambulistic detachment of the characters - their muted responses to things that should be shocking or upsetting - that has sparked comparisons between Harry and surrealist works like Luis Bunuel's The Discreet Charm of the Bourgeoisie (1972).

The Trouble with Harry has been called a pastoral comedy, a fairy tale, and an experiment in "radical, absurdist cinema." However you want to characterize it, it is certainly an unusual, perhaps even dream-like, but ultimately delightful experience. It is also an experience that Hitchcock stood resolutely by. The director blamed his "enemies" – the distributor and exhibitors – for the film's financial failure, and though he was forced to admit that it ultimately proved to be "an expensive self-indulgence," he also insisted that The Trouble with Harry was one of his personal favorites.

A 35mm print of The Trouble with Harry will screen on Sunday, October 19 at 2 p.m. in the auditorium of the Chazen Museum of Art.