A leading and influential political documentary filmmaker of the 1960s and 70s, Emile de Antonio’s work is marked by decidedly dissenting positions on a number of controversial social and political events. The Cinematheque’s selection of four of de Antonio’s feature-length non-fiction movies includes his examination of the Vietnam War, In the Year of the Pig; an unconventional biography of Richard Nixon, Millhouse; Underground, a clandestine look at the Weather Underground during their years in hiding; and Rush to Judgement, a close look at the Warren Commission findings that we will screen on the 50th anniversary of the JFK assassination. All of the prints shown are part of the Emile de Antonio collection at the Wisconsin Center for Film and Theater Research. 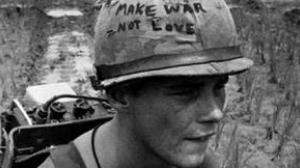 Documentary innovator de Antonio’s look at the Vietnam war shows us what was happening at the height of the conflict (1968/69) through news footage and interviews. The filmmaker makes a compelling argument that “America is intervening in a civil war on behalf of a corrupt, authoritarian South Vietnamese government and carrying on a war founded on racism” (Danny Peary, Guide for the Film Fanatic). 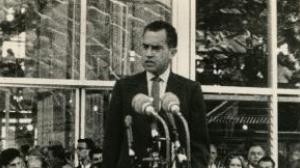 This mesmerizingly haunting journey through Richard Nixon's political career starts with his 1946 House of Representatives win and ends with his ascension to the Presidency in 1968. The story includes all of the setbacks, scandals, gaffes and intrigue that came in between: the trial of Alger Hiss; the Checkers speech; Nixon’s loss in the California Governor's race, et al. Millhouse features a mountain of archival footage and interviews, but no voice-over narration. These are the Nixon years defined and unrefined. (BR) 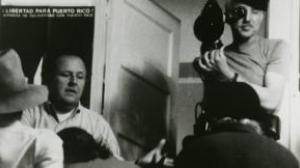 In his most overtly subversive work, de Antonio and his cameraman, Haskell Wexler, interview several fugitive members of the Weather Underground. The subjects, including Bernardine Dohrn and Bill Ayers, are filmed obliquely as they discuss how they came to be radicalized and the violent actions that eventually sent them into hiding. 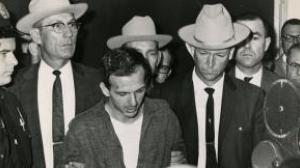 On the 50th anniversary of JFK’s assassination, we go down the rabbit hole with the mother of all conspiracy theories in this film version of Mark Lane's muckraking book. Lane, a lawyer, serves as host, conducting a series of interviews with eyewitnesses to the assassination and the events that followed. Aimed at pointing out flaws and poking holes in the Warren Commission's report, the film is an indelible document of the mystery, paranoia, and grief that swept the country in the months and years that followed the tragedy. Even if one is not prone to believe in cover ups and vast conspiracies, Rush to Judgment is a fascinating exploration of the nature of eyewitness accounts and a clear eyed time capsule of one of the darkest moments in American history. (BR)