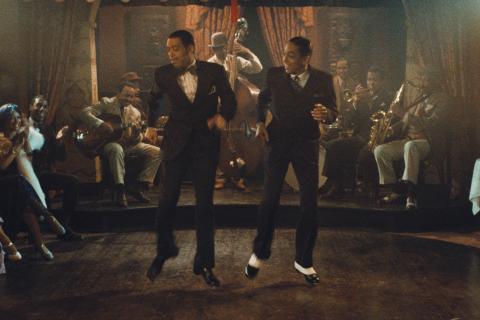 Maurice and Gregory Hines in THE COTTON CLUB

From 1923 to 1940, the famous Cotton Club in New York City roared with musical orchestras from the likes of Duke Ellington and Louis Armstrong, singers such as Lena Horne, dances from the legendary Bill Robinson and the Nicholas Brothers, and audiences that included Fanny Brice, Mae West, and Al Jolson. During its initial years of business, the Cotton Club operated with strict segregation laws leading them to serve only white customers and hire all African American performers. These performances often portrayed imagery of the south and depictions of the performers as “exotic” in order to entice the crowd. Numerous performances from these artists would move beyond the walls of the Cotton Club. Hit songs such as “Creole Love Call,” performed by Duke Ellington and Adelaide Hall, and “Stormy Weather,” remembered most from Lena Horne’s performance in the film adaptation, Stormy Weather, were both featured songs at the nightclub. Over the years of its operation, the Cotton Club’s owner, the gangster Owney Madden, emphasized featuring talented performers that would draw in crowds even during the years of prohibition and depression. However, even with the success of the club’s performers, it would take until the late 1930s for the club to begin allowing African American patrons.

Flash forward forty years: the club’s rich history became the center of the project, The Cotton Club, which began formulating in 1980 and premiered in 1984. The film’s controversial production raged with financial issues, leadership changes, and numerous rewrites of the script. Initially, Francis Ford Coppola was not involved in the film’s creation but was drawn into the project when Robert Evans called to ask how to rework the film’s storyline to include Richard Gere’s character as a white musician within the environment of the Cotton Club. Although Coppola was resistant to joining the film, he became the director and brought William Kennedy on as a writer to join the team that already included Mario Puzo (Coppola’s collaborator on The Godfather trilogy). The circumstances surrounding the film’s production were exceptionally strenuous. Numerous scripts were written but then the writers were forced to condense descriptions, cut dialogue, and replace music. Throughout production, there was also a shady financial situation that resulted in budget issues and even a murder. When the original version of The Cotton Club was released in theaters in 1984, it underperformed at the box office and the overall reception was underwhelming considering the hopes placed on the film’s director, plot, and stars. Despite these struggles, the film still garnered Academy Award nominations for Best Art Direction and Best Film Editing.

Flash forward another thirty-three years after the original release: Coppola premieres The Cotton Club Encore, a re-edited version of the film. After finding the original version of the film on Beta Max tapes, Coppola produced this alternate cut to celebrate the film in a more complete format. The new version of the film attempts to remedy the issues with the strained plot, which, in Coppola’s words, felt “truncated.” Instead, this version refocuses the narrative to balance the storylines between both main characters, Michael “Dixie” Dwyer (Richard Gere), a white musician, and Delbert “Sandman” Williams (Gregory Hines), an African American dancer.

The Cotton Club Encore takes pleasure in leisurely exploring the glamorous and dangerous world surrounding the club’s performers, clientele, and managers. As with most Coppola films, the impeccable casting and cinematography allow the talented performers to dazzle the audience throughout the film. Though the narrative often pulls in different directions as it searches for the balance between the musical and the gangster film, this re-edited version endeavors to flesh out the characters and more clearly establish the experiences of African American characters in Prohibition-era New York. The film delves into Harlem in the late-1920s during the height of the jazz era and sees both Gere and Hines navigate the nightclub scene as struggling performers while dealing with the threats of the criminal underworld. Coppola constructs this intricate world not only by exploring the boisterous atmosphere of Cotton Club but also by establishing intimate relationships for both protagonists. The romantic and familial connections continually form, split apart, and then reconcile throughout the film to prompt the continued momentum of the plot. With a large ensemble cast, the narrative is able to constantly move and introduce new characters in a way that resembles the bustling nature of the city.

While the environment of New York serves as a vibrant backdrop, the scenes in the Cotton Club are where the film shines the brightest. The songs from the late 1920s and early 1930s evoke a keen sense of excitement that make the audience want to be led up the darkened stairs and into the vibrant atmosphere of the club. Overall, the musical performances in The Cotton Club Encore anchor the film as the narrative progresses through the years of the Great Depression and the characters’ shifting lifestyles. Coppola presents the musical elements of the film not just as short numbers but as full performances. This version showcases the addition of three musical numbers initially cut from the 1984 version, including the hauntingly beautiful performance of “Stormy Weather” by Lonette McKee playing Lila Rose and “Tall, Tan, and Terrific” sung by Hines. Although the film’s original cut featured many of the same songs, the re-edited version allows for the richness of the performances to be complimented by stronger characterization within the narrative that was previously subtracted.

While this was not Coppola’s first time releasing a new version of one of his films, the chaotic production history of the original, paired with his desire to unveil the missing narrative elements, makes his decision to revisit the film an understandable one. The Cotton Club Encore takes the good parts of the original and makes them great in ways that permit the talents of the performers, crew, and director to light up the screen. With the new script and musical additions, the film is able to flesh itself out with a stronger narrative that balances both storylines and positions jazz as the lifeblood of the characters. Ultimately, the choice to release The Cotton Club Encore allowed the film to be appreciated by a new audience for its beauty, talent, and tenacity.