The Humanistic Grace of THE RAIN PEOPLE 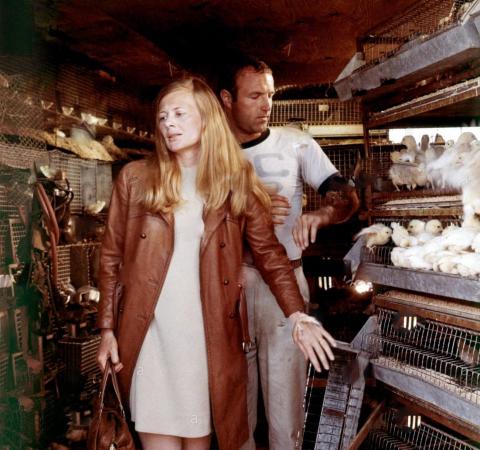 Shirley Knight and James Caan in THE RAIN PEOPLE

These notes on Francis Ford Coppola's The Rain People were written by Lance St. Laurent, PhD candidate in UW Madison’s Department of Communication Arts. A restored 4K DCP of The Rain People from American Zoetrope screened at the Cinematheque on Saturday, September 17, as one of "A Couple of Coppolas." The second of the series, The Cotton Club Encore will screen on Saturday, September 24 in our regular venue, 4070 Vilas Hall, 821 University Ave. Admission is Free!

If Francis Ford Coppola’s career had peaked in 1969 with The Rain People, one imagines that the film would be held in similar esteem as other landmarks of the late 60s’ “Hollywood Renaissance”, such as Bonnie and Clyde (1967) or The Graduate (1967). Of course, Coppola’s career did not peak with The Rain People, and the breakout success of both Godfathers (1972 & 1974), The Conversation (1974), and Apocalypse Now (1979) throughout the 1970s catapulted Coppola to a level of acclaim and creative freedom that most filmmakers only dream of. In the shadow of these titanic achievements, The Rain People has languished in relative obscurity, under-seen and underserved in restorations and home video releases, at least until now. It’s not hard to understand why. In comparison to Coppola’s 70s triumphs, The Rain People is a modest endeavor, with far less in common with films like The Godfather than with the more grounded, domestic character studies of the era, journeys of self-discovery set against the beautiful but remote vastness of middle America like Easy Rider (1969), Five Easy Pieces (1970) or Alice Doesn’t Live Here Anymore (1974). And within that context, The Rain People proves as beguiling as any of its more celebrated contemporaries, an early gem from a young filmmaker finding his footing after struggling with the studio system—1968’s Irish-themed roadshow musical Finian’s Rainbow proved a poor fit for the young Coppola—and as clear a distillation of the sensibilities of the so-called “film school brats” as any film of its era.

The film also showcases a performance by Coppola’s old Hofstra classmate, James Caan, then best known for star turns in two late-career films by director Howard Hawks (Red Line 7000 in 1965 and El Dorado in 1966). Far from the hot-headed Sonny Corleone, The Rain People sees the young and burly Caan not yet settled into to tough, masculine archetypes that would define his later career. As the soft-spoken and brain damaged ex-college footballer Jimmy “Killer” Kilgannon, Caan displays an uncharacteristic gentleness and pathos that reveals emotional depths that Hollywood largely left untapped, his imposing, broad-shouldered physique belying a soul that has been left helpless and abandoned by all those around him. Caan’s Godfather co-star Robert Duvall—already a well-established theater and television actor at this time—also makes a notable appearance as a highway patrolman whose charm belies a more sinister nature.

Still, the work from Caan and the rest of the ensemble would all be for naught without a central performance to hold the film together. Shirley Knight, twice a nominee for Best Supporting Actress, relishes one of her few lead roles as Natalie Ravenna, a beleaguered housewife whose new pregnancy inspires a fit of existential ennui and an impromptu road trip of self-discovery. Knight’s sad, searching eyes give life to Natalie’s sense of emptiness, and her performance, which like the rest of the film leans into a sense of lived-in naturalism, deftly grounds the film in her emotional journey, even as you find yourself questioning many of her decisions. Natalie’s complexity on screen is a testament not only to Knight’s gifts as an actress, but also to Coppola’s burgeoning talents. The whole ensemble demonstrates that Coppola, even at this early point in his career, had developed a keen skill with actors. Furthermore, despite Coppola’s canonical films leaning toward more traditionally masculine genres like crime and war films, his handling of Natalie demonstrates an empathy and sensitivity with female characters that would ultimately be under-explored in Coppola’s later filmography.

Behind the scenes, the film was also an early opportunity for another burgeoning filmmaker, young film school George Lucas, who had met Coppola on the set of Finian’s Rainbow. Still three years out from his feature debut, THX-1138 (1971), Lucas documented The Rain People’s cross-country production in the 30-minute documentary Filmmaker, and edited the film with his future wife Marcia. The partnership with Marcia would prove important not just in Lucas’s personal life, but his professional life as well, as her editorial prowess would be essential to the success of American Graffiti (1973) and especially Star Wars (1977). Lucas’s documentary also helped forge a working relationship with Coppola that would lead to the formation of the pair’s production company American Zoetrope the same year as The Rain People’s release.

In 2022, as The Godfather celebrates its 50th anniversary and Francis Ford Coppola begins to mount his long-gestating, self-funded passion project Megalopolis, there has been much reflection and retrospection about the 83-year-old filmmaking patriarch. Coppola himself has contributed to this reflection, producing new restorations and alternate cuts to many of his films, both the successes (such as the new cut of Apocalypse Now) and the noble failures (such as the recuts of The Godfather III (1990) or the The Cotton Club (1984)). Amidst this flurry of remasters and re-releases, this stunning 4K restoration of The Rain People has been relatively unheralded and is as of yet unannounced for home video or digital release. However, rather than letting the film further languish in obscurity, our screening is an opportunity to celebrate a truly special film, not just for the careers it helped to launch, but for its own beauty, sensitivity, and humanistic grace.