The Nasty Business of POSSESSION 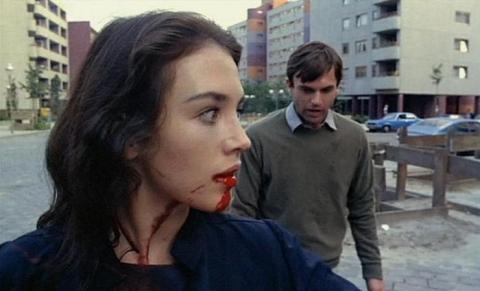 These notes on Andrzej Żuławski’s Possession, were written by Tim Brayton, PhD candidate in UW Madison's Department of Communication Arts. A 35mm print of Possession will screen on Friday, November 5, at the Cinematheque's regular venue, 4070 Vilas Hall, 821 University Avenue. Admission is Free.

The fourth film directed Andrzej Żuławski, 1981’s Possession, has had a difficult history in the English-speaking world. The film (itself shot in English, the director’s only film in that language) was heavily cut down for its 1983 United States release: fully one-third of the film was carved away to bring it down to an incoherent 81 minutes, received with hostility by critics and ignored by audiences. On the other side of the Atlantic, it was initially released uncut in the United Kingdom, but then fell under a bizarre form of notoriety, when it was targeted as one of the 72 “Video Nasties,” the 1983 list of films that the Director Public Prosecutions sought to ban on obscenity grounds.

The Video Nasties list came about due to concerns, in the wake of the first wave of slasher films reaching the new medium of VHS tapes, that young people were being exposed to too much violence and other depraved content. In this context, the presence of Possession is especially bizarre, given that it is, uniquely among those 72 titles, a politically-laden art film, not any kind of exploitation film, and certainly not one that impressionable children would likely have encountered in the first place. Nor, if they had, would they be likely to have understood some of the most challenging and unsettling material in the film. Since its initial European release, critics have struggled to describe Possession: is it horror? Is it a character drama, the symbolic expression of Żuławski’s misery at his acrimonious 1976 divorce from Małgorzata Braunek? Is it a metaphor for Cold War Europe trying desperately to maintain a sense of cohesion even as it is split between two irreconcilable political blocs?

The simple answer is that it’s horror because it’s the other things. Look to Possession in the hope of finding a collection of gory jump scares, and you will look in vain (there is a monster, though: a tremendously convincing and uncomfortably organic-looking one co-created by the great make-up and effects designer Carlo Rambaldi, who went directly from this to the title character of Steven Spielberg’s E.T. The Extra-Terrestrial). But its portrayal of psychological despair is its own kind of bone-deep horror. Viewed as a study of life in West Berlin, right in the shadow of the Berlin Wall, it achieves a surreal, alien quality: Żuławski wanted to suggest the fundamentally anti-human character of the space around the wall, using a Steadicam, then still a fairly novel cinematography tool, to create a weightless, frictionless feeling. It’s part of the film’s overall visual strategy of creating an eerily clean, lifeless vision of Berlin, one that feels like the ghost of a city rather than a place that people go about their days (another part of the filmmakers’ strategy was to use the “wrong” color lights for their film stock, deliberately creating a sickly blue sheen over the whole film).

More still than that, the film’s horror resides in its utter despair with which it presents the collapse of an unhealthy marriage. Żuławski reveals perhaps more than he intended, and perhaps more than we should be comfortable with, of his anger at women in this film’s reality-bending depiction of sexual desire gone wrong. Surely, it’s the film’s visceral portrayal of bodies, human and otherwise, that earned it a spot among the Video Nasties; those were the elements foregrounded in the butchery that transformed the American cut into a bit of gross-out exploitation. Like David Cronenberg’s The Brood, two years earlier, another work of body horror in which an unhappily divorced man worked out his feelings towards his ex-wife and his own failures as a man, Possession finds something fundamentally terrifying in the female sex drive and incomprehensible in female psychology. But here, the restored material filling in the marriage between Mark and Anna moves past body horror into the realm of psychological thriller. The real focus of the film is not on the cephalopod-like thing that Anna is apparently having an affair with, but the sense of comprehensible reality fracturing for Mark and Anna alike as their inner lives shatter.

This focus on the psychological disintegration of two people, fueled by their incompatibility as marriage partners, and Mark’s desperate failed attempts to understand anything about Anna’s mind, is the real source of Possession’s deepest horrors. Isabelle Adjani (who won Best Actress at the Cannes Film Festival for her work in this film and Quartet) and Sam Neill, playing the central couple, have both reported in later interviews that the experience of filming the movie nearly broke them psychologically. The extremes they are pushed to, physically and expressively, are raw and shocking – especially for Adjani, whose work verges into genuine incoherence as she pushes herself all the way into a portrait of unpredictable frenzy. We are watching actors trying to drive themselves to insanity right in front of our eyes, and the results are as gripping as they are disturbing and disorienting.

Possession isn’t an easy film to sit through, in other words. Both in its portrait of the world at large and in its attitude towards the two broken figures who make up its central marriage. It is nihilistic, angry, and unstinting in its attempt to match their mental collapse in the aggressive visual style and frequently unclear narrative. The film’s cult status is well-earned: it holds nothing back emotionally or physically, resulting in a depiction of mental uncertainty and instability that’s like very little else that has ever been made. It’s not an experience for every viewer, but for anyone looking to take a disquieting, disturbing trip through some dark corners of the human mind, Possession lives up to every bit of its nasty reputation.

<<Life Could Be a Dream: MULHOLLAND DR.
Cinematalk Podcast: J.J. Murphy on THE FLORIDA PROJECT>>