The Artistry and Humanity of Djibril Diop Mambéty 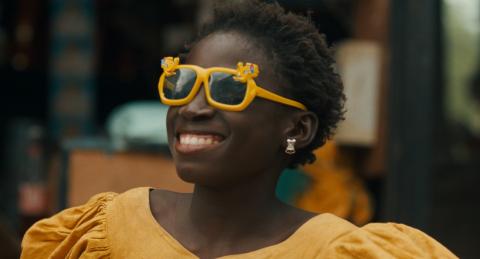 In the history of Senegalese cinema, two filmmakers stand out as the nation’s most prominent. The first, Ousmane Sembene, is known for his inventive yet direct moral parables (in films such as Mandabi, Xala, or Faat Kiné) that detail quandaries experienced by individuals in postcolonial Senegal. The second, Djibril Diop Mambéty, may be harder to neatly label. Unlike Sembene, Mambéty avoids overt didacticism (even if individual moments in his films do indeed appear to comment on the postcolonial moment during which he worked). And while Sembene’s films relay narratives with clear characterizations and causal narration, Mambéty’s films experiment extensively with both cinematic storytelling and style. Such experimentation is most boldly showcased in his 1973 masterpiece, Touki Bouki. But even if Mambéty toned down some of his more extreme experimental tendencies by the late 1990s, his virtues as a filmmaker are nevertheless on full display in his final two films: Le franc (1994) and The Little Girl Who Sold the Sun (1999).

Le franc and The Little Girl Who Sold the Sun are part of a planned trilogy titled “histoires de petites gens” or “stories of little people”--a trilogy that Mambéty did not manage to complete before his untimely death in 1998. In both films, Mambéty presents slice-of-life narratives of ordinary Senegalese individuals navigating life in Dakar and its environs. In Le franc, a poor musician named Marigo discovers he has won the national lottery and treks across Dakar to claim his winnings. In The Little Girl Who Sold the Sun, a young disabled girl named Sili becomes determined to sell copies of the newspaper called The Sun in Dakar to support both herself and her blind grandmother. But in both films, the stories are less straightforward than simple summaries might suggest. Of the two works, Le franc experiments the most with narrative design. After Marigo embarks on his quest to cash in his lottery ticket, the film largely abandons dialogue as a means of advancing the story. Instead, Marigo is presented in a series of locations whose spatial relationships to each other remain unclear. The Little Girl Who Sold the Sun may be Mambéty’s most classically constructed film; Sili has a goal to sell newspapers and encounters obstacles in the achievement of that goal. But narrative experimentation is nevertheless present in this work as well: Sili announces her goal to her unseen grandmother in voice-over as the image track shows a close up Sili’s stoic face (her lips unmoving despite her voice’s presence on the soundtrack) superimposed over a rapidly-moving printing press. Both films conclude ambiguously: Le franc ends with Marigo’s wild laughter at having recovered the ticket that he briefly thought lost. The Little Girl Who Sold the Sun concludes with Sili being carried into the distance by an older student without having recovered her crutch stolen by a gang of rival newspaper vendors. Though both films depict intelligible stories about believable characters, Mambety’s light narrative experimentation infuses both works with a dreamy atmosphere

Aiding in the creation of this atmosphere are other stylistic devices with which Mambéty experiments. In both shorts, like Touki Bouki before them, Mambéty saturates his Dakar cityscapes with deep, warm colors. Marigo traverses Dakar in a deep red/orange garment that complements the rich yellows and blues painted on the side of the bus that serves as his transportation. After she has made a considerable sum on the sale of her newspapers, Sili dances down a street in a deep yellow dress. Subtler still are the rich soundscaes that abound in both works. Though dialogue disappears for much of the middle of Le franc, it is replaced on the soundtrack by dense waves of sounds that include calls to prayer; saxophone, guitar, and percussion solos; and the general hum and whir of the city. Sonorous, too, is the booming voice of Aminata Fall, the actress who plays Marigo’s landlady (Fall was also featured prominently in Touki Bouki). One of the more memorable elements of The Little Girl Who Sold the Sun is Sili’s calm, repeated mantra-like intonation of “Le soleil!” as she promotes her wares. (For more on sound in Mambéty’s films, see UW professor Vlad Dima’s book, Sonic Space in Djibril Diop Mambéty’s Films). The confluence of narrative experimentation, saturated palettes, and dense and varied soundscapes make Le franc and The Little Girl Who Sold the Sun pleasantly hypnotic and sensorial cinematic experiences.

Ambiguity is Mambéty’s modus operandi, but that doesn’t prevent his films from delivering moments of pointed political critique. As Yasmina Price points out in her recent essay on the restorations for New York’s Metrograph theater, Mambéty was strongly critical of the global economic forces that he felt worked against such “petites gens” as Marigo and Sili (such a criticism is particularly evident in his 1992 feature, Hyenas). In a Kafkaesque moment from Le franc that recalls several scenes from Sembene’s Mandabi, Marigo encounters difficulty in claiming his winnings when speaking to a government functionary. Le franc, like Mandabi before it, criticizes the inaccessibility of governmental institutions for those who are poor and uneducated. While speaking with the functionary, Marigo briefly recounts the story of Yaadikoone Ndiaye, a poster of whom adorns the door he has lugged from his small apartment across town. Ndiaye, explains Marigo, is the Senegalese Robin Hood--a man who protected the young and the weak. The same poster can be seen briefly on a wall in the police station to which Sili is taken on the suspicion of theft in The Little Girl Who Sold the Sun. Despite Maméty’s disorienting stylistic concoctions, his criticism of Senegal’s place within a neocolonial global economy can nevertheless be clearly discerned.

Beyond the unique political commentary of Le franc and The Little Girl Who Sold the Sun, the films are also notable social documents for their portrayal of disability. In both works, the audience witnesses disabled characters navigate crowded and occasionally inhospitable spaces. But in neither work is the representation of disability exploited for easy pathos. Yes, we are invited to sympathize with Sili when we see her harassment at the hands of the gang of rival newspaper peddlers. But more often, we are simply invited to witness the placid calm with which she interfaces with her quotidian world. As a viewer with a physical disability, I personally have found Sili’s ordinary management of her life (and Mambéty’s unfussy depiction thereof) to be one of world cinema’s finest depictions of what it means and what it is like to be disabled. This, along with his creative political rhetoric and novel exploitation of cinematic conventions, are sufficient grounds to rank Mambéty as a first-rate humanist and artist.