The Macabre Poetry of THE TEXAS CHAIN SAW MASSACRE 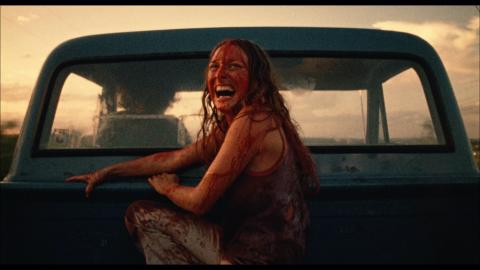 It really all starts with the title. Rarely have a filmmaker and his film so boldly proclaimed their own identity with such ferocity as with Tobe Hooper and The Texas Chain Saw Massacre. It starts with Texas, a state that exists in the public imagination as the setting of countless Westerns, the rough and tumble wilderness where hard men lead lives of violence. On top of that, to audiences in 1974, Texas was also the state where only a decade prior a young president was shot dead in broad daylight.  Then there is “Chain Saw Massacre”, a ruthless and gruesome joining of terms that nonetheless approaches a sort of macabre poetry, or at least an aesthetic aural beauty. Even the misspelling of “Chain Saw”—a misspelling now enshrined in the Library of Congress—speaks to a work that has somehow slipped through the cracks, through the normal structures that are intended to keep something so raw, so unvarnished, away from the general viewing public. It’s a title that makes promises few films could actually keep, something outrageously horrific and grotesque, the stuff that only really exists in imagination or nightmares, not on American movie screens.

And yet, from the opening text crawl—narrated by a pre-Night Court John Larroquette—The Texas Chain Saw Massacre announces itself as not just a new vision of American horror cinema, but a horrifying vision of America itself. The fact that the true story claims were bogus—the film is *loosely* inspired by Wisconsin’s own Ed Gein, but almost entirely fictionalized—is beside the point. For a nation gripped with terror and fascination by the likes of the Manson family and the Zodiac killer, The Texas Chain Saw Massacre showed audiences something that may not have been real per se, but reminded them of something that was true, that there were still darkened corners of this nation where evil may lurk and the unspeakable may occur.

That said, such high-minded cultural resonance would be moot if the film itself couldn’t rise to its moment. But rise to its moment, it did. The Texas Chain Saw Massacre, even 46 year later, remains a remarkably powerful, upsetting, and thrilling piece of genre cinema. Even after numerous sequels and remakes—including one from Tobe Hooper himself in 1986—and countless slasher films that have pilfered its best ideas and images for cheap scares, it remains singular and unmatched in its ability to create a palpable, relentless sense of dread and horror. In time, its rough edges, indicative of its low-budget independent production, have only enhanced its ability to disquiet, giving the film a grimy texture akin to a snuff film, subtly suggesting that what we are seeing was not meant to see the light of day.

And yet there’s a real beauty to The Texas Chain Saw Massacre’s mayhem, a spirit of Grand Guignol filtered through an almost documentary-like verisimilitude. This is perhaps best exemplified by the film’s now iconic ending. Without getting too specific, the horrors that have befallen Sally (Marilyn Burns, in a performance that helped define the “final girl” trope) end only with a reprieve, not triumph and certainly not justice. Her pained, horrified expression remains unchanged; her wails are what we are left with, a lingering reminder that she will never truly escape the horrors she has witnessed. As for Leatherface (Gunnar Hansen), he seems unfazed, undulating wildly against the blistering sun, an almost joyous dance of death. He lives to hunt another day.

Leatherface’s moment in the sun remains one of the most indelible images in horror cinema, and speaks to the ways that Texas Chain Saw Massacre works against the conventions that would come to define the burgeoning slasher genre. The sun rising on an escape would, in lesser films, represent the promise of freedom, a piercing light through the darkness of human degradation that Leatherface and his family represent, a triumph of the human spirit against soulless ghouls. In Chain Saw, though, it is merely a momentary reprieve. The horrors of Leatherface do not end when the sun comes up, nor does the light reveal him to be a creature that can only thrive in the shadows. Instead, in the light of day, the horrors that befall the victims of The Texas Chain Saw Massacre remain as horrific as in the night, and the monsters behind them continue to hide in broad daylight, waiting for their moment to strike.