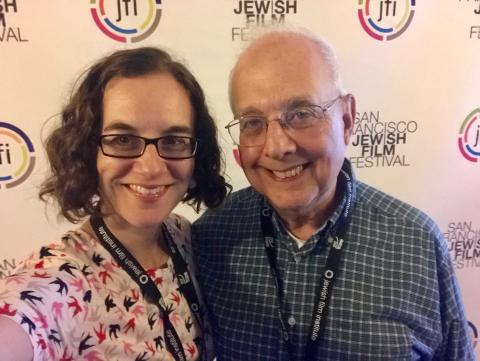 As a bonus to the Cinematheque's presentation of The Rabbi Goes West, this episode of Cinematalk features the Cinematheque's Ben Reiser in discussion with the husband and wife filmmaking team behind the compelling new documentary.

Gerald Peary is the director of the documentary features For the Love of Movies: The Story of American Film Criticism (2009) and Archie's Betty (2015). He also appeared in the cast of Andrew Bujalski’s Computer Chess and he has frequently appeared in person at the Wisconsin Film Festival to present his work. Gerry received a Ph.D. in Communications from the UW Madison in 1977 and in addition to being a filmmaker has had a long career in film criticism and journalism with his work appearing in The Boston Globe, the Los Angeles Times, and many other publications.

Amy Geller’s award-winning productions include PBS's The War That Made America (2005), For the Love of Movies: The Story of American Film Criticism (2009), and The Guys Next Door (2016), which she co-directed. Her work has been broadcast on television and screened at prestigious film festivals around the world. She served as the Artistic Director of the Boston Jewish Film Festival and teaches production courses at Boston University.

Listen to Cinematalk below, or subscribe through Apple podcasts or wherever you get your podcasts.