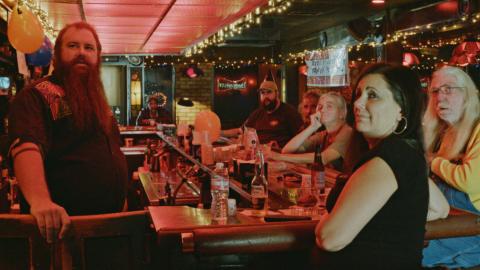 The UW Cinematheque's free series of view-at-home movies continues this week with a new release that was originally scheduled to be one of the Closing Night Selections of the 2020 Wisconsin Film Festival, Bill and Turner Ross's fascinating doc-fiction hybrid Bloody Nose, Empty Pockets.

BLOODY NOSE, EMPTY POCKETS (US, 2020, 98 min.) It’s last call at Roaring 20’s, a dive bar on the outskirts of Las Vegas that would fit right in in Wisconsin. It’s closing down, so the regulars assemble for one last 24-hour bender, some bellying up to the bar well before noon—audience members may be tempted to place bets on who will be the last person standing. As the night deepens, emotions swirl with the inscrutable logic of drink: camaraderie withers into sniping and back again, hilarious carousing seamlessly transforms into tender soul-baring. But things are not exactly as they seem. Though the film could absolutely pass for one of the Ross Brothers' earlier documentaries, Roaring 20’s is actually in New Orleans, it’s still open, and its denizens are a specifically cast group of locals worthy of Denis Johnson or John Cassavetes. At the same time, the night we see is real; there was no script, only the barest of outlines, and those are real drinks going down. The result is a captivating and original slice of pure cinema, exactly as authentic as you feel after a few too many—which is to say, very.

After premieres at the 2020 Sundance and Berlin Film Festivals, Bloody Nose, Empty Pockets was scheduled to be one of the Closing Night Attractions of the 2020 Wisconsin Film Festival. Now you can discover it at home for yourselves while the cinemas - and bars - remain on, shall we say, hiatus. The Cinematheque has a limited number of opportunities to view Bloody Nose at home for free. To request access, send an email to info@cinema.wisc.edu and make sure to include the word ROSS in the subject line or the first line of the email.

On a new episode of our Cinematalk podcast, Mike King talks with Bill & Turner Ross, two of the most exciting and forward-thinking contemporary American filmmakers. The Ross Brothers discuss Bloody Nose, Empty Pockets. and shed light on the unusual production methods behind the film, and its relationship to their past work.  You can listen below, or here on Soundcloud. You can also subscribe to Cinematalk through Apple Podcasts.