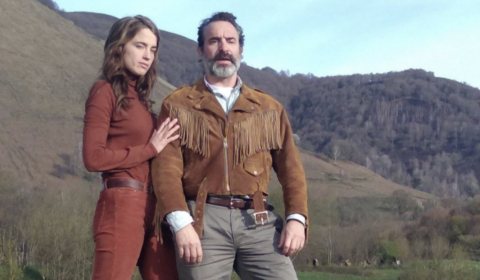 While the UW Cinematheque's free screenings at 4070 Vilas and the Chazen Museum of Art remain on indefinite hiatus during this challenging time, our programming staff will be offering a series of specially curated movies that can be viewed at home.

This week, in partnership with NEON and Greenwich Entertainment, the Cinematheque is providing the opportunity here to view two new releases that were originally scheduled to play the 2020 Wisconsin Film Festival: the fascinating new documentary Spaceship Earth and Jean Dujardin in the absurdist French comedy Deerskin.

A portion of the revenue from each rental will support the Cinematheque and our future programming efforts.

SPACESHIP EARTH: In 1991, eight men and women were sealed into Biosphere 2, an airtight terrarium in the Arizona desert containing miniature versions of various Earth ecosystems: desert, ocean, rainforest, etc. Partly inspired by the movie Silent Running and funded by an oil tycoon hoping to acquire licensable technologies for space colonization, the mission of Biosphere 2 was to maintain an isolated, sustainable environment for two years. It was a mission that led to significant ecological crises under the geodesic domes, including near starvation, polluted air, and a serious problem with cockroaches. Biosphere 2 generated a lot of press, but little was revealed about the people who created it. Using archival footage and new interviews with the surviving participants, Spaceship Earth follows the visionary countercultural collective over half of a century, beginning with early experiments and avant-garde theater performed around the globe leading up to Biosphere 2. If Spaceship Earth is a cautionary tale about the forces that threaten our planet, it is also an inspirational tribute to what a small creative group can achieve. Available for home streaming here. 50% of rental revenues go to support the UW Cinematheque.

DEERSKIN: Oscar winner Jean Dujardin and Portrait of a Lady on Fire's Adèle Haenel delight in this hilarious, shocking comedy, about a man so enamored with his new jacket that he vows to destroy all others. When he first gazes upon himself in a mirror, adorned in a vintage, fringe-covered deerskin jacket, all George can say is, "killer style." Turns out, he means it literally. Seized by the conviction that his should be the only jacket in the whole world, George starts collecting them, right off people's backs, whether they want to give them up or not. He finds a surprisingly loyal coconspirator in Denise, a bartender and aspiring filmmaker who thinks George's increasingly bloody campaign has the makings of a great movie (she's right). The teaming of Dujardin and Haenel is a joy, particularly for such a nutty, one-of-a-kind venture. This unsparing satire of a mid-life crisis has been variously described as "hilarious" by Indiewire, "hilarious" by The Playlist, "laugh-out-loud hilarious" by Film Threat, and "hilarious" by us in the first sentence of this paragraph. Available for home streaming here. 50% of rental revenues go to support the UW Cinematheque.

Check out reviews for Spaceship Earth in The New York Times, The Los Angeles Times, and Variety.

Check out reviews for Deerskin in The New York Times, Rolling Stone, and The Wall Street Journal.

See below to view trailers for Deerskin and Spaceship Earth.

There are several opportunities to watch and participate in online Q&As for Spaceship Earth this weekend. Click here for more information.

And Cinematalk, the official podcast of the UW Cinematheque, is back with discussions about this week's offerings and upcoming Cinematheque programming.  Visit our blog here to read more and listen in.

Go here to donate to the UW Cinematheque.

We value your support for the Cinematheque and we look forward to being able to watch movies with you soon in the proper cinematic settings of 4070 Vilas Hall and the Chazen Museum of Art.