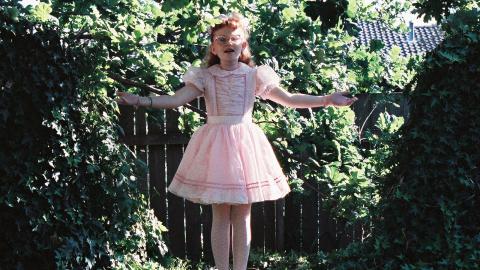 The following notes on Jane Campion's Sweetie were written by Tim Brayton, PhD Candidate in UW-Madison’s Department of Communication Arts. A 35mm print of Sweetie from the Chicago Film Society collection will be screened as part of our ongoing Sunday Cinematheque series at the Chazen Museum of Art on Sunday, October 6 at 2 p.m.

If you know the great Australian-New Zealander director Jane Campion only through her biggest hits – the 1993 Oscar-winner The Piano, or the 2010s TV series Top of the Lake – elements of Sweetie will seem familiar. Like many of her later projects, Campion’s first theatrically-released feature (after a handful of short films and the 1986 telefilm Two Friends) is a psychodrama about a difficult, at times unknowable woman. It does not ask us to like its protagonist, and indeed it puts some real effort into making sure we don’t like her, yet she comes across as a sympathetic and recognizable human throughout.

But it is a much more compact, small-scale film than her best-known work. If we consider only the one-sentence summary of the story – a woman in her twenties is forced to deal with the intrusion of her  pathetic sad-sack father and terrifyingly uninhibited sister into her staid life – it doesn’t sound especially far away from the genial domestic comedies that were about to become Australia’s most commercially reliable export, films in the Muriel’s Wedding (1994) model. There’s something concise and intimate about the scenario, enforced perhaps by the limited resources with which the first-timer was obliged to work.

Still, no matter how many different films we might call up as being similar to Sweetie in some way, or which might somehow contextualize it (in a directorial career, in a national cinema), it will always remain the case that this is a tricky, singular work, one that’s almost impossible to fully unpack. As seasoned a film viewer as Roger Ebert openly admitted that his first experience with the film left him confounded and unsure about his emotional reaction. This is a perfectly reasonable response: as small as it is, Sweetie is a daunting work, asking much of its viewer as it subjects us to the extremities of human feeling embodied by its two main characters. Summing up his second viewing, Ebert noted, “Most movies slide right through our minds without hitting anything. This one screams and shouts every step of the way.” That’s a fair synopsis: this certainly does scream at us, mostly through the raging emotions of its title character. But it also whispers and sometimes remains silent altogether.

Sweetie is named after one of its characters, Dawn (Geneviève Lemon), a titanic life-force whose childish greed and indifference to other people manages to cause significant pain to every other figure onscreen, but it’s actually the story of her sister, Kay (Karen Colston). It’s close to the one-third mark before we’ll meet Dawn, in fact, during which time we’ve seen Kay discard one romantic relationship and go a good long way toward sabotaging a second. It would be going too far to say we’ve gotten to know Kay. Indeed, one of the most significant facts about Sweetie is how successfully it prevents us from ever getting a good peek into the main character’s head. Dawn, in contrast, is an open book, her whims and appetites declaring themselves loud and clear at every beat. But pithily summarizing this as “one sister is closed-off, one is exuberant” is of no help at all; Kay’s opacity is much more complex than that, and much more dramatically compelling. The lead character’s unknowability is the story, in a sense: We spend the entire running time of Sweetie trying to figure Kay out, and other than implying that anybody growing up with Dawn for a sibling would tend to embrace an arm’s-length detachment from the rest of humanity as a survival instinct, the film never even feints towards providing an answer.

That arm’s-length remove is a literal one, by the way: one of the very first images of the film is a shot of a human arm jutting towards the camera, attached to a body that has been pointedly kept out of focus by cinematographer Sally Bongers. It’s almost as though the limb has been disconnected from the body it belongs to, and this fragmentary approach to depicting the human form will persist throughout Sweetie. Despite the everyday setting, Campion and Bongers are not at all interested in aesthetic realism: Sweetie is rife with weird distortions caused by atypical lens choices, unnaturally close shot scales that reduce characters to hands, legs, and parts of faces, and disorientingly rich colors, far bolder than the scenario or conventions of domestic character drama-comedy would seem to require. Simply put, we are not meant to be comfortable watching Sweetie. We are meant to be struck, over and over again, by the fundamental oddness of this world and these characters, with the visuals forcing us into a gut-level appreciation of the unstable, even dangerous situation at the film’s heart. The motif of bodily close-ups – a trope Campion uses elsewhere in her career – here seems to be primarily about emphasizing the isolation between the characters by visually demonstrating that they can’t even exist as complete human organisms, let alone as a satisfactory, functioning family unit.

It’s a demanding film, to say the least, but Campion isn’t looking to punish us. For all its severity,  Sweetie is ultimately a comedy – one of the bitterest, blackest comedies you’ll ever see, but a comedy even so. This is, at heart, a quintessential Australian tale of offbeat eccentrics, and simply from the incongruous physical appearance of the sisters, Sweetie is happy to lean into that eccentricity. Even more than it is an acute psychological study, this is primarily a very peculiar film, and that can at time means that it’s a bit goofy. It’s like Dawn herself, in that regard; thorny, unpleasant, maybe terrifying, but it also has a magnetism that makes the destruction in its heart somewhat alluring. It’s all too much for Kay, who shuts herself down in the face of this energy, but Campion has kindly allowed us to experience this electrifying dysfunction through the safety of the movie screen, in one of the most constantly surprising films of the 1980s.