AND LIFE GOES ON: Kiarostami and Neorealism 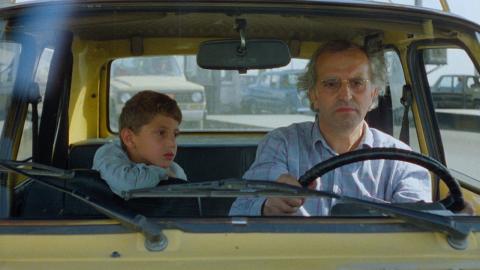 AND LIFE GOES ON

The following notes on Abbas Kiarostami's And Life Goes On (Zendegi va digar hich, 1992)  were written by David Vanden Bossche, PhD Student in UW-Madison’s Department of Communication Arts and co-organizer of the Antwerp Summer Film School. The second film in Kiarostami's "Koker Trilogy," And Life Goes On will screen in Friday, October 4, at 7 p.m., in our regular venue, 4070 Vilas Hall.

The Iranian director Abbas Kiarostami gained international attention in 1987 with Where Is The Friend’s House? after spending a decennium working on documentary shorts at the ‘Kanun’ institute for youth education in Iran. In his breakthrough film, a young schoolboy is looking for the house of one of his classmates in order to return the book he took with him by mistake, a crucial item the friend will need to be able to hand in an assignment the next morning. The film was shot in Koker, a small rural village that was hit by a devastating earthquake in 1990. Kiarostami returned to the village and, inspired by the display of human resilience he witnessed there, instigated this belated sequel (the second part in an unofficial ‘Koker’ trilogy that ended with 1994’s Through the Olive Trees). And Life Goes On ingeniously evokes the multilayered relation between reality, fiction and filmic construction, that became Kiarostami’s trademark.

The film’s set-up is deceptively simple. An actor playing Kiarostami (the irony of the director ‘directing’ himself is only one of the movie’s clever reflections on the ontological role of the filmmaker) travels by car through Iran with a (fictitious) son in an attempt to reach Koker in the immediate wake of the earthquake. The entire voyage is presented as a search for the youngsters that featured as the leads in Where Is the Friend’s House?  and continuously recalls set-ups and situations from that film. While Kiarostami did in fact inquire about the faith of his young actors, we should definitely not look at And Life Goes On as a documentary. As pointed out by Tom Paulus in the Photogenie article “Truth in Cinema: The Riddle of Kiarostami,” Kiarostami is searching for a way in which ‘the lie of the cinematic construction’ can uncover the deeper truth of reality. The interaction between those two conceptions of reality is already on full display in the opening scene that uses the ritual of a car entering a tollway as a metaphor for the experience of the movie theatre, a similarity that is strenghtened throughout the film: the ‘frame’ of the car’s window is the equivalent of the cinema’s ‘framing’ of reality – a similar movement that guides the viewer’s eye.

Because the Iranian master has a tendency to record reality in a seemingly neutral way, he is often called a heir to the Italian Neorealists. Most arguments for this approach (non-professional actors, ‘realistic’ narratives) fail however in embracing ‘de-dramatization’ as the essential element of such films as Umberto D. or Paisà. As Gilles Deleuze has put it, the Italian movement meant the shift from film as an art of movement to film as an art of pure time and – like his Neorealist predecessors – Kiarostami does indeed ‘de-dramatize’ time by allowing ‘real time’ into the essentially artificial time of the filmic construction. That this perception of ‘realism’ is just as much a part of the ‘lie’ of the filmic construction is something we are asked to acknowledge time and again when the film makes us aware of the act of filming (and watching) itself.

Those instances also emphasize the aestheticization of reality, be it through a breathtakingly subtle color-palette, as well as the ‘flat’ imagery that stems from Kiarostami’s use of long lenses – a technical choice that merges the characters with the surrounding landscapes and recalls the ‘flat’ stylism of traditional Persian visual arts.

<<Behind the Blue Door: Kiarostami's WHERE IS THE FRIEND'S HOUSE?
Electrifying Dysfunction: Jane Campion's SWEETIE>>