Behind the Blue Door: Kiarostami's WHERE IS THE FRIEND'S HOUSE? 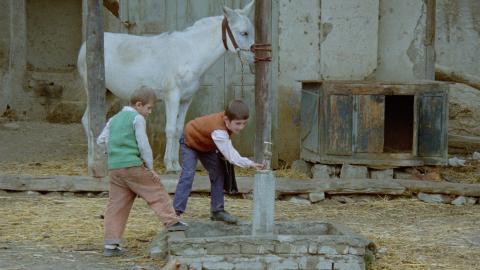 WHERE IS THE FRIEND'S HOUSE?

The following notes on Abbas Kiarostami's Where is the Friend's House? were written by Zachary Zahos, UW-Cinematheque Project Assistant and PhD Student in UW-Madison’s Department of Communication Arts. The first film in Kiarostami's "Koker" Trilogy, Where is the Friend's House? will screen in a newly restored DCP on Friday, September 27 at 7 p.m. in our regular venue, 4070 Vilas Hall. The second and third films in the trilogy, And Life Goes On and Through the Olive Trees, will screen October 4 and 11, respectively.

When he died in 2016, Abbas Kiarostami left a body of cinema unique for its beauty, insight, and profound cohesion. His wonderful “Koker Trilogy,” consisting of the films that first won him laurels at European film festivals and launched his reputation among Western film critics, best exemplifies the artistic progression and omni-directional ballast of his oeuvre. The first film in this informal trilogy, Where Is the Friend’s House? (Khane-ye doust kodjast?), tells the story of an eight-year-old boy, Ahmad, trying to return the notebook that belongs to his beleaguered friend from school. The second film, And Life Goes On (Zendegi va digar hich), casts a Kiarostami-like director returning to Koker, a town in northwestern Iran, to search for the first film’s child actors, following a real-life, devastating 1990 earthquake. The third film, Through the Olive Trees (Zire darakhatan zeyton), builds a gentle romantic comedy plot around two actors playing newlyweds on the set of And Life Goes On. The geographic unity and reflexive games between these three films have led critics to group them as a trilogy, though Kiarostami himself drew a line around the latter two films and his 1997 Palme d’Or winner Taste of Cherry (Ta’m e guilass). However you split them, Kiarostami’s films speak to one another on levels of subject, form, and theme, not merely referring back to earlier films but seemingly anticipating future projects and signaling lifelong preoccupations.

To further illustrate his filmography’s backwards-and-forwards integrity, Kiarostami paired Where Is the Friend’s House? with his 1989 documentary Homework, having said the following: “In Homework the children talk about what is then seen in Where Is the Friend’s House?; and Where Is the Friend’s House? shows that what the children say in Homework is true.” What the schoolchildren discuss in Homework is, as one might guess, the burden of homework, even if the on-screen subjects in that film are conditioned to never voice their displeasure. The causes for that conditioning are on full display throughout Where Is the Friend’s House?, which features emotionally fragile children, the threat of corporal punishment both at school and at home, and an authoritarian schoolteacher straight out of a Louis Althusser case study. Developing ideas introduced in his first two films, The Bread and Alley (1970) and Breaktime (1972), Kiarostami thrusts the young protagonist Ahmad into a frightening world of negligent adults, labyrinthine architecture, and threatening impasses.

Thankfully, like his early short films and the rest of the Koker Trilogy, Where Is the Friend’s House? builds to an optimistic, if still ironic and suggestive, end. The specifics of the film’s ending aside, which I will not spoil, the overarching narrative charts the development of Ahmad’s intellect and moral sense—his dawning of conscience. The plot, again, follows Ahmad (Babek Ahmadpour)  as he seeks to return a notebook to his peer, Mohammad Reza (Ahmad Ahmadpour, Babek’s brother), who lives in the nearby village of Poshteh, though where specifically Ahmad does not know. Between his family’s village of Koker and Poshteh, Ahmad encounters a series of adults, who fail to help him whether due to ignorance, overwork, or loneliness. Kiarostami focuses on Ahmad’s lived experience during this trial through an empathetic approach to scene coverage. Here, Kiarostami punctuates long shots of Ahmad darting up and down stairs and across landscapes with shallow focus close-ups of Ahmad’s restive glances and pleas. The tight shots of Ahmad processing the world around him often lop off the heads of adults around him, filmed or angled as they are to the boy’s height.

While the symbolic dimension of Kiarostami’s work can be overstated, doors and doorways serve as thematic linchpins and even animate characters in Where Is the Friend’s House?. Two male adults Ahmad encounters on his journey craft doors as part of their trade, surely not a coincidence. The first is a brusque middle-aged salesman who hard-sells iron doors; the second, meanwhile, is an older man who likes to hear himself talk, droning on to Ahmad about his traditional, artisinal wooden doors. The disparity between the two indicates modernizing forces at work in rural Iran, and two narcissistic modes of masculinity for Ahmad to avoid.

As far as doors ‘behaving’ like characters, the first shot of the film consists of opening titles over a blue door, which flaps noisily for about a minute and 20 seconds. The yells of children off-screen indicate that this door just barely seals off a classroom, and the brisk swinging-open of the door after the credits announces the teacher’s arrival. The film’s climax similarly entrusts a door with an eerie sense of agency. While I will again refrain from disclosing the choice Ahmad makes here, the scene’s striking mise-en-scène positions a doorway at the center of the frame. In a long shot, a gust of wind flies the door wide open before Ahmad, who soon becomes transfixed on the doorway and the billowing sheets his mother placed on the clothesline beyond it. A fondness for aperture framing runs through Kiarostami’s career, up to his posthumous film 24 Frames (2017), as does the use of doors and windows to subdivide space and lend graphic impact, typified in his masterful Certified Copy (2010). The climax of Where Is the Friend’s House? and the final shot a few minutes later both showcase Kiarostami’s lifelong genius for transforming everyday objects (a door and a notebook, respectively) into reflective indices of his protagonist’s inner life. The heady, electric charge one feels leaving this film affirms the miracle, and just-dawning immortality, of Abbas Kiarostami’s cinema.

<<Unknown Legend: THE ASSASSINATION OF JESSE JAMES BY THE COWARD ROBERT FORD
AND LIFE GOES ON: Kiarostami and Neorealism>>