Unknown Legend: THE ASSASSINATION OF JESSE JAMES BY THE COWARD ROBERT FORD 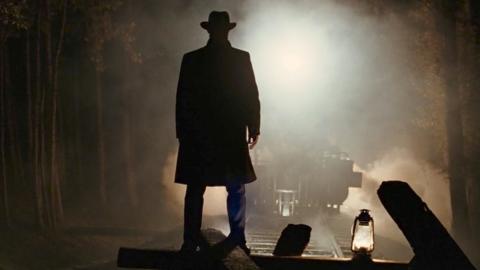 These notes on Andrew Dominik's The Assassination of Jesse James by the Coward Robert Ford (2007) were written by Ben Donahue, Associate Director of Alternative Cinema at WUD Film. A 35mm print of this film will open our Sunday Cinematheque at the Chazen series for the Fall 2019 semester, "Chicago Film Society Presents!" this Sunday, September 1, at 2 p.m in the Chazen Museum of Art's auditorium. Free admission!

Most often, genres are not defined by the location in which the story unfolds but by a series of recognizable narrative and stylistic elements. It’s this small detail about genre that makes the western so unique. Relegated entirely to one region, the western transforms the vast landscape of the American frontier into a character just as vital to the genre as the ones John Wayne portrayed. The character of the frontier is instantly recognizable for its rough, empty, and unforgiving landscapes. This void demands to be filled by larger than life characters, outlaws and rangers alike elevated into mythical figures. Perhaps the most infamous of all the idols that ever occupied the sprawling expanse of the western frontier is Jesse Woodson James.

The Assassination of Jesse James by the Coward Robert Ford is not concerned with the sensational crimes or daring robberies of Jesse and the James gang. Andrew Domink’s quiet western epic from 2007 focuses on the man at the center of the myth. Brad Pitt gives a career best performance as the enigmatic but cautious outlaw. The film operates almost as a behind-the-scenes look at a rock star on tour. From the perspective of the audience, the life of a touring pop icon is glamorous, but we only see what’s on stage and never what’s off of it. Watching this movie, we fit comfortably into the shoes of Robert Ford, who is portrayed by a perfectly wide-eyed and awkward Casey Affleck. In the same way that moviegoers idolized John Wayne, Gary Cooper, Henry Fonda, or Clint Eastwood for decades, Robert Ford idolizes Jesse James; he is more demigod than he is human to Robert. It’s easy for us to understand how excited Robert is to meet Jesse, but almost easier to relate the feeling of being let down when he learns his idol is human after all.

Westerns were always about brave and strong heroes of the story, but The Assassination of Jesse James changes the focus from idols to the act of idolatry itself. The film isn’t focused on one man, but instead on the relationship between two men: one infatuated with the other and one wary of the other. Robert’s obsession turns him into a shy puppy dog staring, following, and doing everything that Jesse does. When Robert tries to take Jesse James’s place, by killing him, he makes the mistake of assuming that his feet could possibly fill Jesse’s larger-than-life boots. Jesse James was a villain to some, a folk hero to others, but a legend to all. Robert may have assassinated the man known as Jesse James, but in doing so, he only bolstered the vitality of Jesse’s legend. Being unable to replace or become Jesse James, Robert is forced to repeatedly live out his role as the man who killed him. Robert now realizes the true loneliness Jesse lived in, and he becomes a mere footnote at the end of Jesse’s saga. Jesse and Robert’s relationship of idol and worshipper reveals something quietly sad about the western genre. Even at their most solemn and dirty, westerns share the idea of grand men who could fill the emptiness of the frontier. Dominik’s film is a humbling and humanizing film that strips back the legend of the Wild Wild West and reveals the lonely reality in which people lived.

Just as it tweaks well-established western themes, this film also builds on the aesthetic tradition of other westerns. Gorgeously shot on film by famed cinematographer Roger Deakins, The Assassination of Jesse James is truly a sight to behold. The open deserts and dusty hills of The Searchers have been replaced with rolling grassy plains right out of Days of Heaven and frozen tundra reminiscent of McCabe & Mrs. Miller. With the same reverence for nature that can be seen in all westerns, Deakins incorporates a stunning degree of natural light and darkness. With warm and dreamy sunshine and night that actually looks pitch black, Deacons lends the film an oneiric quality. This is best exemplified in the now famous nighttime train robbery scene early on in the film. By performing a bleach bypass on the film’s negatives, Deakins achieves a pitch black color that allows the bright light mounted on the train to cut through the forest and smoke with extreme contrast. Every shot in the movie is impressively realized, pitching men against the environment as well as each other through a powerful mix of light, color, and composition. The potent beauty and dreaminess of the visuals help to reinforce the rose-tinted glasses through which we and Robert view legends of the west like Jesse James.

The Assassination of Jesse James by the Coward Robert Ford is the quintessential modern western. Evoking the stylistic elements of the classics while simultaneously proposing a more nuanced perspective, this film is not just about the characters in the story, but about the nature of the western genre itself. It interrogates the old and builds off it, increasing our appreciation for previous westerns and the part they played in defining the American frontier.

<<HORSE FEATHERS: Goofs Gone Wild
Behind the Blue Door: Kiarostami's WHERE IS THE FRIEND'S HOUSE?>>