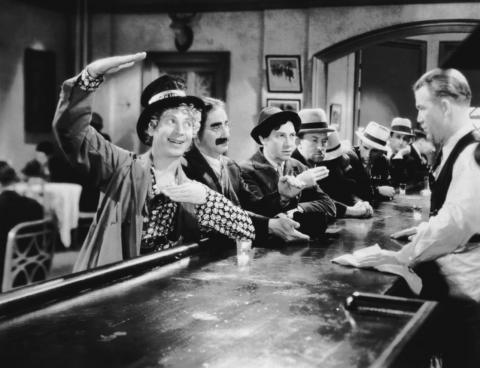 Late August has arrived, that period of the year in which we struggle to squeeze in last minute summer activities and reading as the days grow noticeably shorter and cooler, knowing damn well that the daily grind of the school year lurks, in all its terrible banality, just around the corner. For those of you plagued by end-of-summer ennui, you will no doubt find 68 minutes worth of respite in watching the Marx Brothers in Horse Feathers, a perfect collegiate comedy to ease you, chortling and guffawing, into the last semester of this dizzy decade.

The plot of Horse Feathers is advanced in the tiniest pauses of the film’s general cascade of vaudeville shtick. You will be laughing too hard at any given gag to catch these fleeting moments of narrative orientation, so I will do you the kindness of summarizing what little plot the film has. Groucho Marx plays Quincy Adams Wagstaff, the newly appointed president of Huxley College. As Wagstaff’s son, Frank, Zeppo Marx pitches woo to Connie Bailey (Thelma Todd), the young college widow (incidentally, you will be forgiven for having no idea what a “college widow” is or does). As college president, Wagstaff takes up the noble, time-honored academic tradition of devoting a disproportionate amount of time and attention to the university football team, for which Frank plays. As Huxley College’s football team lacks enough quality players to beat their rival, Groucho ventures to a speakeasy (Horse Feathers was released in the waning days of Prohibition) to recruit a couple strapping players. But wouldn’t you know it, the actual football players elude Wagstaff, and he mistakenly recruits Baravelli (Chico Marx), the foreigner who speaks almost exclusively in malaprops, and Pinky (Harpo Marx), who does not speak at all. Once united, the three brothers cause general pandemonium in the Huxley community up to and throughout the big game—even if some characters, like the college widow, try to thwart them in the process. Everyone remaining true to type, Groucho wisecracks circles around vexed stuffed shirts, Chico misunderstands every statement put to him and bungles every statement he must make, and Harpo gleefully unleashes a torrent of mute, truly chaotic physical comedy. The latter two find opportunities to showcase their virtuosic musical talent along the way.

The Marx Brothers’ cinematic career can be divided into two periods: Paramount and post-Paramount. In the five films they made at Paramount Studios between 1929 and 1933, the brothers’ surreal mayhem—mayhem that they could kick up as naturally as they could breathe—was not especially constrained by the exigencies of coherent storytelling. In later Marx Brothers’ films, the brothers become more goal oriented, and romantic subplots take up greater portions of running time. Horse Feathers, released in 1932, is a Paramount Marx Brothers’ film through and through. Yes, we do get traces of the kind of syrupy romance that, in the later films, stops the cartoon chaos dead in its tracks. But in Horse Feathers, such moments go by quickly, allowing the brothers to resume the madness for which they are known and loved. At one point, Zeppo (the straight man of the four, who left the act when the brothers left Paramount) serenades Connie with the lightly silly song “Everyone Says I Love You.” The gooeyness of this moment quickly subsides, however, as we cut to Harpo cheerfully whistling the same tune. But then things get weird. Harpo proceeds bemusedly to eat flowers and horse feed while sitting on the side of the road. The sound of horns gradually mounts, and we realize that the dogcatcher wagon he drives is holding up a great deal of traffic as he idly enjoys his inedible snacks. He briefly confounds a cop before the sequence dissolves into a cacophonous and surreal traffic jam that rivals the famous sequence of Godard’s Weekend. If you suddenly find yourself bored by a moment of peace in Horse Feathers, don’t worry—it won’t last long.

There is one absence in Horse Feathers of which the Marx Brothers’ most ardent fans will be acutely aware. Horse Feathers lacks the presence of Margaret Dumont, the matronly character actor who often served as the befuddled eye of the Marx’s (especially Groucho’s) category five hurricane. Yet Horse Feathers is graced with a performance by another skilled comedienne: Thelma Todd. Todd, like Dumont, serves as an excellent foil for the brothers’ whirlwind. A wide-eyed starlet of the pre-code era, Todd plays the college widow with a sense of flirtatiousness and duplicity that complements the Brothers’ own lechery and perfidy much better than, say, the milquetoast virtuousness of Kitty Carlisle as the romantic heroine of A Night at the Opera, which the Brothers made at MGM three years after Horse Feathers.

Watching a Marx Brothers film, one can’t help but see the quartet (or trio after 1933) as the principle authorial voice of their work. In his landmark book The American Cinema, Andrew Sarris dedicates some time to the Marx family in what is otherwise a strict taxonomy of directors. Still, we should make space for a word or two about the film’s director, Norman Z. McLeod. McLeod is noteworthy for his direction of vehicles for many of Hollywood’s most famous comedic actors of the 30s and 40s. Indeed, it is hard to think of another studio era director who worked with as many clowns and cut-ups as McLeod. Two years after Horse Feathers, he directed W.C. Fields in It’s a Gift. In the screwball heyday of the late 30s, McLeod directed both Topper and Topper Takes a Trip, the former of which starred Cary Grant. In the 40s, he directed films starring Red Skelton (Panama Hattie) and Danny Kaye (The Secret Life of Walter Mitty). After helming Road to Rio, the fifth installment of the popular Bing Crosby/Bob Hope Road to… series, McLeod worked regularly on Bob Hope comedies, most notably directing 1948’s The Paleface. McLeod’s filming style lacks any obvious flourishes, but one can’t help but imagine that the experience of directing Groucho, Harpo, and Chico was valuable in forming McLeod’s ability to foreground different kinds of comedic performances.

Naturally, the big set piece in Horse Feathers is the climactic football game. Of course, the brothers’ ostensible goal is to win the big football game for Huxley College. But the game itself serves as an excuse for Groucho, Harpo, and Chico to repeatedly, baldly cheat in creative ways that would put the Harlem Globetrotters to shame. As we marvel at the sheer mischievous invention of the innumerable gags of this climax, we may once again be reminded of the upcoming school year. Though going back to school can be a drag, we can at least watch Horse Feathers and be grateful that our teachers and students could not possibly bamboozle us as thoroughly, as devastatingly, or as deftly as the Marx brothers are able—much to our delight—to bamboozle any force of authority or normalcy up there on the screen.

<<PINA: A Dance Elegy in 3D
Unknown Legend: THE ASSASSINATION OF JESSE JAMES BY THE COWARD ROBERT FORD>>