BLACK BOOK: The Paradoxical Pleasures of the War Thriller 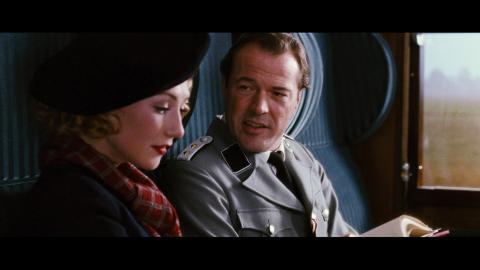 The following notes on Paul Verhoeven's Black Book (2006) were written by Luke Holmaas, PhD candidate in UW-Madison’s Department of Communication Arts. A 35mm print of Black Book from the archives at the University of North Carolina School of the Arts will screen on Saturday, April 27 at 7 p.m. in our regular venue, 4070 Vilas Hall, 821 University Avenue. Free admission.

In a variety of ways, Paul Verhoeven’s 2006 film Black Book (Zwartboek) functioned as a return of sorts for the famed Dutch filmmaker. It was the first film in nearly two decades made in his native country and language, following a lengthy sojourn in Hollywood as the simultaneously celebrated and reviled filmmaker of RoboCop, Basic Instinct, Showgirls, Starship Troopers and more. Likewise, it also returned Verhoeven to the World War II setting of his 1977 Dutch masterpiece Soldier of Orange and reunited him with screenwriter Gerard Soeteman, Verhoeven’s frequent collaborator in his early Dutch films (including Soldier of Orange).

Black Book works to highlight both sides of Verhoeven’s directorial persona: the acclaimed, internationally successful Dutch filmmaker as well as a Hollywood trash auteur. Beyond the reunion with Soeteman, Black Book also returns to the mixture of grand spectacle and uneasiness about Holland’s role in the war and Nazi occupation that animated much of Soldier of Orange, a mixture that is drawn from both Verhoeven’s own childhood memories of the war (which he once described as “like big special effects in the sky”) and his experiences of growing up in a postwar Holland rebuilding and coming to grips with (or perhaps failing to) its own wartime traumas. Verhoeven’s experience as a big-budget Hollywood filmmaker surely helped him on Black Book, which, at over $20 million, was the most expensive Dutch film ever made at the time, necessitating a labyrinthine network of financing and 23 separate producers to get it off the ground. The slick storytelling, full of twists and turns, not to mention the requisite Verhoeven trademark of gratuitous (or is it?) sex and violence, propels it forward through its nearly two and a half hour runtime.

Following the travails of Jewish woman Rachel Stein (Dutch TV veteran and future Game of Thrones actress Carice van Houten) as she struggles to hide her identity and survive in 1944 occupied Holland, Black Book is rife with all of the narrow escapes, disguises, and double-crosses one would expect from a WWII resistance thriller. Perhaps more surprising, though, is the patina of moral ambiguity that permeates the film. Specifically, the film openly questions the mythology of the Dutch resistance to the Nazis, from Rachel’s central affair with SS officer Ludwig Müntze (Sebastian Koch), frequently a far more sympathetic character than the anti-Semitic resistance fighters who send her to spy on him, to the postwar humiliation she suffers at the hands of the very citizens she helped to free from the Nazis. Such moral ambiguity likewise served to divide critical response to the film, with Washington Post critic Stephen Hunter and the New Yorker’s Anthony Lane both roasting the film for treating its historical subject too lightly (Lane claiming it to be “trash pretending to serve the cause of history”) while the Village Voice’s J. Hoberman and the Chicago Reader’s Jonathan Rosenbaum heaped praise on the film, the latter calling it “a bracing rebuke to Schindler’s List” in its willingness to engage with the moral complexities and uncertainties of history surrounding the war, local responses to Nazi occupation, and the Holocaust more broadly.

Of course, such a sharply divided reaction was nothing new for Verhoeven, who had both been accused of creating morally reprehensible trash and had been praised for producing smartly subversive satire throughout his career, from early works such as 1973’s Turkish Delight (itself something of a rebuke of the 1970 American smash Love Story) and, especially, in relation to his high-profile Hollywood work, notably Basic Instinct and Starship Troopers. And while Black Book’s box office success was likewise mixed ($27 million worldwide on its $20+ million budget), its paradoxical pleasures continue to shine through. In particular, van Houten’s triumphant, bravura lead performance stands out against the excesses of the film’s more outré villain, as does the pulpy plot and prurient sexuality against moments of shocking violence. With the horrors of the Holocaust lurking in the shadows throughout, the film amounts to a darkly cynical vision.

In many ways, then, Black Book seems to sum up all of the myriad ambiguities and confusions we can (and perhaps should) have about the war-time thriller as a popular cinematic genre in general. Looking at it from this perspective, A.V. Club reviewer Noel Murray seems to put it best in his review of the film: “Black Book may be one of the most fun movies ever made about how people basically suck.”

<<Bringing THE ROAD BACK Back
DANGEROUS GAME: Madonna Looks Into the Mother of Mirrors>>