BACK STREET: The Case of John M. Stahl 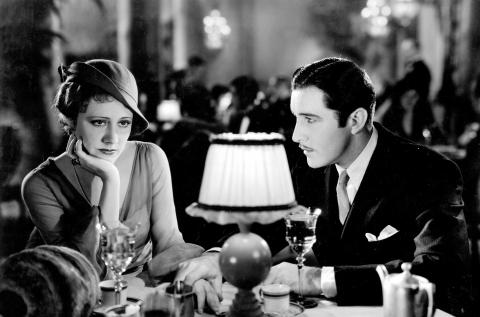 These notes on John M. Stahl's Back Street were written by Zachary Zahos, PhD candidate in the Department of Communication Arts at UW–Madison. A 35mm print of Back Street will screen in our Sunday Cinematheque at the Chazen Universal series on Sunday, February 3 at 2 p.m. in the Chazen Museum of Art's auditorium. Free admission!

Long neglected or dismissed by critics, John M. Stahl (1886–1950) has enjoyed renewed attention as of late. The inclusion of two timeless Stahl films, Back Street (1932) and Seed (1931), in UW-Cinematheque’s series of Carl Laemmle Jr.-era Universal Studios pictures follows a flurry of well-received repertory bookings across North America and Europe. In its larger Universal series from 2016, the Museum of Modern Art rounded out the aforementioned two melodramas with Stahl’s Only Yesterday (1933), forming what curator Dave Kehr called “an informal trilogy of mature, morally ambivalent films about adultery.” I attended those three MoMA screenings, and virtually no other cinematic experience can compare: none match my sense of discovery, my intense emotional identification with the films’ protagonists, or my mystification as to how Stahl’s spare style ultimately achieves these transcendent effects.

That was 2016, a couple months before I moved to Madison to become a graduate student. I have since, to put it mildly, observed the circulation of Stahl’s films with interest. Last year, for example, Italy’s premiere classic film festivals mounted major, parallel Stahl retrospectives: Il Cinema Ritrovato in Bologna showcased a generous sample of his sound films, while the Pordenone Silent Film Festival wrangled his exceedingly rare surviving work from 1917-1926. These efforts have challenged Stahl’s reputation as merely the “capable craftsman” behind Gene Tierney thriller Leave Her to Heaven (1945), according to TCM; or “the one who made the first versions of Sirk’s masterpieces” like Imitation of Life (1934, Stahl; 1959, Sirk), as critic Yann Tobin once ruefully put it. While these retrospectives have found room for generic outliers—like his wistfully romantic war film Immortal Sergeant (1943), starring Henry Fonda and Maureen O’Hara—Stahl’s mastery of melodrama has emerged as the big takeaway, for some.

I say “for some,” because a select handful of scholars and critics have long been hip to Stahl’s genius. Many can be found in The Call of the Heart: John M. Stahl and Hollywood Melodrama, a new collection of essays by eminent scholars—UW-Madison’s Professor Lea Jacobs among them. Of Stahl’s melodramas, Back Street specifically has long served as one of the most fruitful case studies: for Jacobs, in her book The Wages of Sin: Censorship and the Fallen Woman Film, 1928-1942 (1991) and other articles; for historian and former UW Prof. Tino Balio, in his book Grand Design: Hollywood as a Modern Business Enterprise, 1930-1939 (1995); and for feminist critic Molly Haskell, in From Reverence to Rape: The Treatment of Women in the Movies (1974).

Back Street’s enduring appeal lies in part in the simplicity of its plot, adapted from Fannie Hurst’s novel, and the eternal currents running beneath it. Middle-class beauty Ray Schmidt (Irene Dunne) and upper-middle-class salesman Walter Saxel (John Boles) fall in love, but a missed concert rendezvous precludes their marriage. Years later, they meet again, by which point Walter has married a wealthier woman. Still infatuated with one another, Ray agrees to be Walter’s mistress, and the subsequent action shows very little of the happiness they presumably shared. Instead, Ray passes most of her days alone, holed up in the “back street” apartment Walter bought for her. When doting childhood friend Kurt (George Meeker), who has since become a rich car manufacturer, re-enters her life, Ray faces another fork in the road. In my experience, her decision—disclosed through a bold narrative ellipsis, one of many—elicits an audible reaction from the audience.

The research of Jacobs and Balio has revealed how Back Street, despite its underseen status today, was subject to agonizing censorship debates upon and well after its 1932 release. Colonel Jason S. Joy, head of the Studio Relations Committee (SRC), distrusted Laemmle Jr. for “lapses in taste” at a time when enforcement of the Production Code was patchy at best. Industry overseers anticipated a backlash, and they got one: Catholic newspapers excoriated the film for teaching “false principles of morality,” and the Catholic Legion of Decency condemned it two years later. Grappling with the counterintuitive logic of censors and conservative audiences, Jacobs surmises that the hostility toward the film was because of how tender and “subdued” Ray and Walter’s extramarital relationship is, and not in spite of it. If Ray behaved in a more licentious and selfish manner, the thinking goes, she could be more easily stigmatized. Instead, under Stahl’s direction, Dunne scaled back her performance, investing intelligence, independence, and lovesick melancholy into her actions and pauses.

For Haskell, Dunne’s brilliance, Stahl’s “sublime” direction, and the specifics of the scenario launch this Back Street miles above Universal’s two later remakes of Hurst’s novel. Dismissing the “inane” 1961 David Miller adaptation, starring John Gavin and Susan Hayward, Haskell notes how Ray’s socioeconomic upgrade from susceptible young everywoman to “globe-trotting fashion executive” undercuts “the closed system of decisions and consequences on which middle-class tragedy depends.” Contrasting Stahl’s film to the 1941 Robert Stevenson version, which starred Margaret Sullavan and Charles Boyer, Haskell observes, “The idea of a woman ‘giving up all’ for Charles Boyer is a lot easier on the pride than the idea of ‘giving up all’ for John Boles. But then, Boyer’s delicacy and intelligence make it impossible to believe him capable of the insensitive behavior toward a woman that one can believe of Boles.”

Indeed, while Boles has a mediocre reputation as an actor, he excelled as the dashing narcissist—parts he also played in Seed and Only Yesterday. The final scenes in Back Street make Walter the most sympathetic of the three scoundrels Boles played for Stahl. Cinematographer Karl Freund (of The Last Laugh fame) deserves ample credit here, for lighting Boles and Dunne with shards of bright, drifting light at key moments. But the magic of the whole enterprise belongs to Stahl, who matched a sure hand with unadulterated empathy, defying critics, censors, and fellow craftsmen to this day.