The Music of SOMETHING WILD 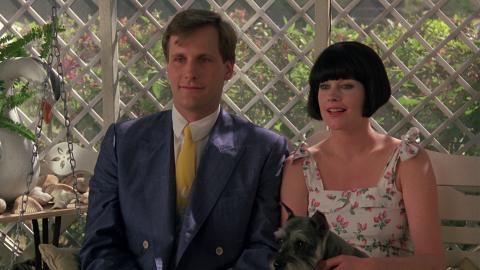 These notes on the late Jonathan Demme's Something Wild (1986) were written by Zachary Zahos, PhD candidate in UW Madison’s Department of Communication Arts. A 35mm print of Something Wild will screen in our tribute to Demme on Saturday, September 30 at 7 p.m. in our regular screening venue, 4070 Vilas Hall.

Eight years before Pulp Fiction’s soundtrack climbed the Billboard 200, Jonathan Demme’s Something Wild (1986) advanced, to less immediate acclaim, the art of the pop music soundtrack. Few movies, before or since, match it in terms of sheer volume of songs, and even fewer rival the internal diversity of its selections, from unique artists, genres, and countries of origin. At last month’s BAM Cinema series commemorating Demme, who died in April, Paul Thomas Anderson marveled at the soundtrack’s scope: “[It] was historic how much music was in that movie. Watching it again, it’s there and it does everything, but it doesn’t overpower it. There’s all these long silences, too. I still can’t figure out how he did it.”

By associating certain tones, locations, and story acts with distinct musical styles, Demme—along with music supervisors Sharon Boyle and Gary Goetzman, composers John Cale and Laurie Anderson, and music editor Suzana Perlic—managed to squeeze some fifty-plus songs into this romantic comedy/neo-noir/road trip movie, and help give shape to this highly elastic concept. Following the impromptu journey of square Charlie (Jeff Daniels) and chic Audrey (Melanie Griffith, who first goes by “Lulu”) from New York City to Pennsylvania, Virginia, and back, Something Wild spends significant time in top-down cars with cranked-up radios, like American Graffiti (1973) before it. As with George Lucas’s film, one can detect in Something Wild’s soundtrack a personality behind its curation, but here the range of musical genres, the largely contemporary vintage of the tracks, and the organizing principles behind their arrangement showcase Demme’s famously democratic sensibility.

With his effortless, quintessentially American style, Demme mastered, and thus obscured, the technical nightmares underlying his projects. For Something Wild, Demme assumed the formidable challenge of sourcing nearly all the film’s music—excepting Anderson and Cale’s gentle, infrequent original score and Jean-Michel Jarre’s eerie “Ethnicolor,” over a scene of climactic violence—to the story world, making the songs “diegetic.” This self-imposed rule comes across not as overindulgence but—to paraphrase one of Demme’s heroes, Jean Renoir—as a way of keeping one door always open to the outside world. For instance, before fading out David Byrne and Celia Cruz’s opening credits song, “Loco de amor (Crazy for Love)" (hear below), to commence the story proper, Demme grounds this song in the film’s world with a shot of a man listening to this song from a boombox in front of the café where Charlie and Audrey meet. A salsa riff on The Troggs’ “Wild Thing,” “Loco de amor” in turn impresses the thematic importance (recall the film’s title) of that British Invasion classic, which is sung three more times by characters during lax moments of harmony.

The first act of the film—a 25-minute run from opening titles to the first nightfall—breezes by with an exuberant, wall-to-wall mix of world music. Including “Loco de amor,” ten songs populate this aural space, mostly via car radios, and all but three hail from Latin America or Africa. These include the following: On the café radio, “Si Por Mi Llueve” by Puerto Rican salsa singer Cheo Feliciano; in the Holland Tunnel, “Wozani Mahipi (Hippies Come to Soweto),” by Mahotella Queens, leading practitioners of South Africa’s mbaqanga style; Jamaican deejay Big Youth’s “Feel It” on the New Jersey Turnpike; “Highlife,” by Nigerian pop star Sonny Okosun, greeting Charlie and Audrey’s first kiss; and “Ooh! Aah!” by Jamaican reggae group Fabulous Five Inc., played from a dazzling tape player shaped like an ancient African Transformer. Aside from “Wild Thing,” the only notable continental selection in this opening stretch comes when Charlie flees an unpaid bill and an irate Charles Napier: Big Audio Dynamite’s “Medicine Show,” which prominently samples Ennio Morricone’s theme from The Good, the Bad and The Ugly, cheers this moment of coerced lawlessness.

After a tellingly pop music-free interlude at Audrey’s mother’s house, Charlie and Audrey arrive at her Pennsylvania high school reunion, which is surely one of the most graceful sequences in Demme’s career. Introduced on-stage with a loving, star-spangled tracking shot, New Jersey college rock legends The Feelies perform a set of covers and originals as Charlie and Audrey feel the first shivers of a deeper attraction on the dance floor. Music supervisor Gary Goetzman—who also won an Oscar producing Demme’s The Silence of the Lambs (1991)—joins the band on stage for a partly Spanish language rendition of Freddy Fender’s “Before the Next Teardrop Falls.” To a funky cover of Bowie’s “Fame,” Jeff Daniels commits to screen an indelible dance that defies notions of good or bad, and immediately after, The Feelies’ own “Loveless Love” scores the snakelike entrance of the volatile ex-lover in Audrey’s life, Ray (Ray Liotta).

Once Ray takes over the literal and narrative wheel, the soundtrack turns toward punk (X’s “The New World,” to start) and new wave (Madison’s own Timbuk3, whose “The Future’s So Bright, I Gotta Wear Shades” plays at the first gas station). When reggae music returns, at a pivotal moment later at a diner, it comes in the hybrid form of “Zero, Zero Seven Charlie” by UB40 (also hear below), a new wave-influenced reggae outfit from England—perhaps suggesting that some of Ray has rubbed onto Charlie. But beyond defining character, Something Wild’s soundtrack creates a utopian sense of place (and taste), which is pure Demme: a Pennsylvania thrift shop in on the joke of, and otherwise enjoying, “Yahoo Eeee” by Wazmo Nariz; a group of black men freestyle rapping outside of a Virginia gas station; a whole world ready to sing “Wild Thing,” from the heart.

<<Through the Darkness of Future Past: TWIN PEAKS FIRE WALK WITH ME
Wiseman Smiles Too: CENTRAL PARK>>