Through the Darkness of Future Past: TWIN PEAKS FIRE WALK WITH ME 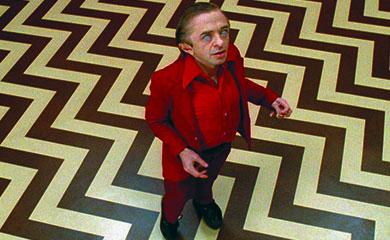 TWIN PEAKS: FIRE WALK WITH ME

This essay on David Lynch's Twin Peaks: Fire Walk with Me (1992) was written by WUD Film’s Kristen Johnson-Salazar. A new DCP of Fire Walk with Me will screen at our regular venue, 4070 Vilas Hall, on Friday, September 29 at 7 p.m. The screening will be preceded, at 6:30 p.m., by special Twin Peaks pre-show material assembled by Daniel Knox.

Some movies have the power to transport you to a certain time and place.  It could be the year the film came out, the first time you saw it, or just where and when the film is set.  For me, the Twin Peaks film and show capture a specific time and mood for when I first became captivated by the fantastical and devious world of Twin Peaks.

Twin Peaks: Fire Walk with Me entered theaters in 1992, a year after its television counterpart’s untimely cancellation that left fans in a whirlwind of questions pertaining to the fate of many of Twin Peaks’ notable residents.  Director David Lynch successfully carries the already cinematic world of Twin Peaks to the silver screen, allowing the audience to once again slip into the obscure and dark realities that lie beneath the town’s upbeat quirkiness.  Unfortunately for fans of the show, many believed the film to be a sequel rather than a prequel, so it was to their disappointment that the film wasn’t going to further the plot where the series’s cliffhanger left off.

The film’s timeline spans from a year before the events that transpire in the series to the last days of Laura Palmer’s life.  We are treated to reprise performances of characters the audience has come to know, like Laura Palmer (Sheryl Lee), Leland Palmer (Ray Wise), Gordon Cole (David Lynch), Dale Cooper (Kyle MacLachlan) and so on.  Yet, within the first twenty minutes of the film, the only people to inhabit the world are a new investigative team of Special Agent Chester Desmond (Chris Isaak) and Agent Sam Stanley (Kiefer Sutherland), who are sent to a town after a body is found in a similar fashion to other murders in the area.  From this segment we head over to the FBI headquarters where supernatural manifestations begin to transpire, including an unnatural routine by Special Agent Phillip Jefferies (David Bowie).  This acts as our transition between the two storylines, as now we are in the deep waters of Lynch’s nightmarish spirits that have a hand in the terrible occurrences that lay before the path of Laura Palmer.

Sheryl Lee’s presence in Fire Walk with Me as Laura Palmer is something supernatural in and of itself.  Her mesmerizing character and electric performance can finally be seen on screen, instead of in video and pictures frames or in dreams where she lived in the television series.  Laura is a sympathetic and endearing young woman, who struggles with drug addiction, parental abuse, and the supernatural.  We, like her best friend Donna Hayward (Moira Kelly, who replaced Lara Flynn Boyle in the film), see Laura in glimpses of her real self, and want to reach out to help her. Yet, through our ironic knowledge of the television series, we know she is doomed.  The film embraces this fact and, by the end, we prepare for the shock and horror of Laura’s fate.

For many, this was seen as a step backwards for the series.  Critically and financially, Twin Peaks: Fire Walk with Me did not perform as well as many thought it would.  It received negative critiques, especially in the realm of the film feeling joyless and having a lack of clarity.  Since its release in 1992, an assemblage of deleted footage from Fire Walk with Me came out in July 2014, titled Twin Peaks: The Missing Pieces.  In October of the same year, Showtime announced a Twin Peaks miniseries as a continuation of the television show and film, with series creators David Lynch and Mark Frost returning. While pre-production was hazy in the beginning, with rumors of Lynch leaving the project due to creative and financial issues, Frost and Lynch finally agreed with Showtime to create the 18 episode return to Twin Peaks that aired this year. I cried in class the day I heard this news.

Even if the revival of Twin Peaks had never transpired and the only new stories we received were Mark Frost’s books about the history of Twin Peaks, this film, years later after the water has settled, does feel complete and whole.  We are given closure to Laura’s story and to her character.  The ending sequence is both empowering and emotional.  Angelo Badalamenti’s “The Voice of Love,” is orchestrated with such ambiance and love that it transcends our world similar to Laura’s transcendence.  It’s beautiful, heartbreaking, haunting, and, most of all, Angelo.  It isn’t Twin Peaks without Angelo’s score.

Amongst everything that has been said, Twin Peaks: Fire Walk with Me is a film that needs to be watched and re-watched, not just for the references to the old show, but especially now in relation to the revival series.  Viewing some scenes post this most recently aired season can add more depth to not just character actions, but also to characters’ reactions.  I would highly encourage all who view this film to watch this third season of Twin Peaks, as it not only adds to Fire Walk with Me, but it’s an experience similar to the original series, which is something you won’t see anywhere else.

<<How Do You Want to Be Loved? Almodóvar's LAW OF DESIRE
The Music of SOMETHING WILD>>