"The Apu Trilogy" 3: THE WORLD OF APU 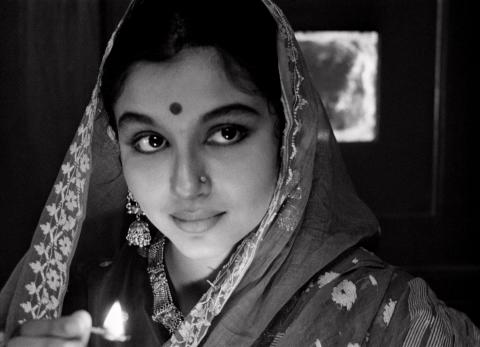 This essay on Satyajit Ray's The World of Apu was written by Tim Brayton, Ph.D. candidate in the Department of Communication Arts at UW Madison. A newly restored 4K DCP of The World of Apu, the final film in Ray's Apu trilogy, will screen at the Cinematheque's regular venue, 4070 Vilas Hall, on Friday, December 18, at 7 p.m.

The English-language title of Apur Sansar, the 1959 finale of Satyajit Ray's monumental trilogy about the youth and young adulthood of one Apu Roy, translates as The World of Apu. It's a fitting label for a film that moves away from the domestic intimacy of Pather Panchali and Aparajito to depict, if not the world of Apu, then certainly the world and Apu; it is a story of the discovery that one is not, after all, the main character in the grand narrative of the universe, that there's a whole teeming mass of humans with their own needs and dreams. This is clear even from the opening scene, which ends with the main character (played this time by radio announcer Soumitra Chatterjee, making his film debut) overhearing the sounds of political radicals agitating on the street. It's the first time in the trilogy that the outside world muscles its way into Apu's awareness through his comfortable self-regard; it will not be the last.

The World of Apu is a story in two parts, each of them describing the process by which a pleasant and selfish young man grows up. In the beginning, Apu is doggedly trying to write an autobiographical novel and receiving no positive feedback for it. To get him out of his head, his friend drags him to a wedding, where events transpire that would fit right into the fabric of a particularly absurd romantic comedy. It seems that the groom has lost his mind, and the mother of the bride won't let the marriage go on. According to local custom, however, if the bride Aparna (Sharmila Tagore) doesn't marry on this date, she will be forever after branded as unmarriageable. With some goading, Apu agrees to save the day by getting married.

This is nothing if not contrived, but Ray and his two extraordinary lead actors (who would both return to collaborate with the director several times) invest their scenario with great depth of feeling. There are few filmed depictions of the giddy rush of young marriage that have anything like the sweetness of Apu and Aparna's shy, clumsy happiness around each other. Their nervous glances during her first night in his cramped bachelor pad give way to charmingly low-key bliss as the couple settles into their domestic roles. Robin Wood described this as "one of the cinema's classic affirmative depictions of married life," and there are few movies indeed that derive so much of their power and pleasure from presenting a wholly functional romantic relationship. Nor does the film focus solely on the lovers in their intimate moments: it contrasts the central relationship with the full, noisy life of the city – the sound of crying babies is used as an important repeating motif – and plays Apu's goofy, swooning romanticism against the workaday reality of the city around him to touching, and at times comic effect.

Following his two debut films, Pather Panchali and Aparajito, Ray shifted away from their steady realist aesthetic: The Philosopher's Stone (1958) is a magical realist comedy, while The Music Room (also 1958) is a mood piece set inside a costume drama. With The World of Apu, he turned back in the direction of realism, although it would be impossible to pretend that the director's excursions into new styles and storytelling forms didn't inform the feel of his fifth feature. Compared to the rawness of the other Apu films, The World of Apu is more polished and confident in its artistic gestures. A cinema screen dissolving into the rear window of a cab (with its attendant implication that the world outside the cab is just as rife with entertainment as the movies), for example, is the kind of flourish that would never have fit into the sparer aesthetic modes of the earlier films.

Where Ray's new artistic control is shown off to best affect is in the film's second and shorter part, in which Apu deals with tragedy by dropping out of life to become a wanderer, abandoning his family, his artistic ambitions, and the world itself. The tone of the film is much closer to the intellectual moodiness and abstraction of The Music Room than anything in the concrete realism of the previous films in the trilogy, with Subrata Mitra's cinematography striving for a more self-consciously epic scope in its accumulation of wide exteriors and intense close-ups, and Ravi Shankar's score frequently eschewing the comforting tunefulness he'd brought to the earlier films. It is filmmaking that privileges open, raw emotion above all things, using the landscape itself as an extension of personality – especially in the powerful final image, a variation on the closing shots of Pather Panchali and Aparajito, that soundlessly communicates the growth as a responsible human that Apu has experienced.

The World of Apu is typically regarded as the least of the three films, a judgment made by critics from Jonathan Rosenbaum of the Chicago Reader to the AV Club, in its review of the recent 4K restorations under the auspices of the Criterion Collection, which the Cinematheque has been showing throughout December. Perhaps this criticism is fair; certainly, the screentime devoted to a strong female foil for Apu – arguably the greatest strength of both of the previous films – is notably lacking compared to the prominence given to his sister in Pather Panchali and his mother in Aparajito (Tagore is wonderful, but it takes the film quite some time to arrive at her). The film is a remarkable piece of humanist art on its own terms, however, telling a story of fatherly responsibility that's thoughtful and profound in ways that well-worn theme often isn't; and Chatterjee is a revelation as Apu, by turns arrogant and soft, tender and wrathful. It is a film to be cherished no less than its predecessors, and it marks the conclusion of one of cinema's most brilliantly sustained series, a portrait of childish self-interest blossoming into adulthood that soars like no other coming-of-age story in all of film.

<<Matt Connolly on THE SHOP AROUND THE CORNER
Favorites of 2015: Jim Healy>>