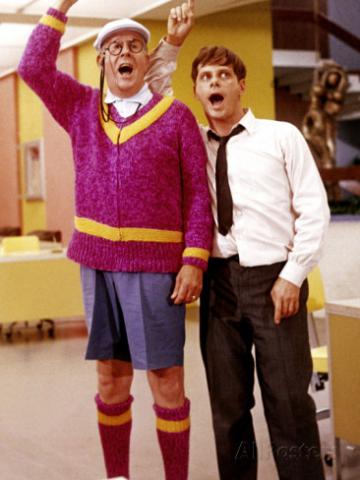 Hollywood musicals have always drawn to some degree from Broadway, but until the late-1950s, most adaptations bore only a passing resemblance to their stage originals. After the breakup of the studio system, however, as adaptations became a key strategy for reducing the risks of film musical production, fidelity became the order of the day. Musicals were expensive and complicated, and they often performed poorly in important foreign markets. But an adaptation of a hit Broadway show could be helped by the familiarity of its story and songs. Moreover, since Broadway musicals regularly spawned international casts, adaptations were also thought to have a better chance of succeeding overseas. Many filmmakers thus started bringing Broadway musicals to the screen relatively intact. Fidelity to the source material became a production strategy, and the adaptation of How to Succeed in Business Without Really Trying is a particularly enjoyable example of this strategy at work.

When How to Succeed opened on Broadway in October 1961, it was an instant hit. Jack Weinstock and Willie Gilbert had first tried to mount Shepherd Mead's 1952 satirical instruction manual as a straight play in 1955, but with little success. In 1960, producers Cy Feuer and Ernest H. Martin took an interest in the project, and brought in the Tony-winning creative team from Guys and Dolls to retool it as a musical. Abe Burrows – who also directed – collaborated with Weinstock and Gilbert on the book, and Frank Loesser wrote the songs. How to Succeed ran on Broadway for an impressive three-and-a-half years. It won seven Tony Awards, including Best Musical, and was awarded the Pulitzer Prize for Drama in 1962. Critics praised its tight integration of story and song, and raved about its sophisticated satire of corporate America. Walter Kerr of the New York Herald Tribune called the musical "crafty, conniving, sneaky, cynical, irreverent, impertinent, sly, malicious, and lovely, just lovely."

Given the splash How to Succeed was making on Broadway, it's not surprising that Hollywood took notice. The Mirisch Corporation was looking for a musical to follow their massively popular West Side Story (1961), and How to Succeed seemed ideal. United Artists, with whom Mirisch had a long-term distribution contract, agreed to the project, but stipulated that the budget should not exceed $3 million. After paying a hefty $1 million for the film rights to the musical in October 1964, Mirisch was left with a budget well below the average for this type of picture (West Side Story cost just under $7 million, while Funny Girl, also 1967, cost $14 million.) But UA was hedging its bets. How to Succeed was a satire, which made some in Hollywood wary, and the international market was always an uncertainty where musicals were concerned. In fact, UA decided to shoot special "dialogue bridges" that could be substituted for the songs in foreign prints, should the need arise.

To keep costs down, then, producer Walter Mirisch hired much of How to Succeed’s original Broadway cast, including Robert Morse, Michele Lee, and cultural icon Rudy Vallee. Thanks to how well these actors knew their roles, production went smoothly and wrapped a week ahead of schedule. But of course using the Broadway cast also brought to the screen the same tour-de-force performances that had garnered critical attention on the stage. This was particularly true in the case of Morse, playing ingratiating corporate ladder-climber J. Pierpont Finch. Morse had been working in film, television, and theater since the early-1950s, but it was his Tony-winning performance in How to Succeed that really put him on the map, and – except, perhaps, for his recent stint on Mad Men – it remains his defining role. Indeed, Life magazine's review of the film claimed that "generations as yet unborn will be grateful to have [Morse's performance] in permanent form," while Bosley Crowther of The New York Times insisted that "Seeing Mr. Morse in close-ups, as those wily expressions cross his face . . . is better . . . than seeing him on the stage."

According to director David Swift, then, who also wrote and co-produced the adaptation of How to Succeed, the decision to hire the Broadway cast was primarily artistic, and was part of a larger emphasis on fidelity to the stage musical. Walter Mirisch explained, for example, that it was the Broadway property that was the film's true star, while UA suggested that any so-called "improvements" made during the adaptation process would only be "gilding the lily." So Swift cut some songs for the sake of time, and trimmed some of the profanity at the request of the Production Code Administration, but otherwise kept the musical relatively intact. As director, moreover, Swift approached How to Succeed as "simply and straightforwardly as possible," using what he frankly described as "unimaginative camera work" and attempting to replicate certain theatrical techniques through staging and editing. Add in Dale Moreda's recreations of Bob Fosse's distinctive choreography, and How to Succeed looks much the same on screen as it did on stage.

Critical response to Swift's faithful approach was generally positive, although several reviewers did find his stylistic choices rather old fashioned. For most critics, however, the adaptation accurately captured the cynical tone of the stage version, even if it did lack "cinematic imagination." Commonweal, for example, noted that How to Succeed could have been a Richard Lester-esque "imaginative movie-kind-of-movie," but hypothesized that "Perhaps [Swift] was right. The original show was so funny that even the static movie is a laff riot and the satire on how men – and women – behave in business is just as biting on the large screen." Hollywood Reporter, moreover, praised the film's cinematography for capturing "the brassy quality of Broadway musical theatre at its best."

How to Succeed in Business Without Really Trying resonated more with critics than with the public, and despite a strong opening weekend at Radio City Music Hall in March 1967, the film’s box office performance lagged. Nevertheless, it remains one of the most enjoyable Broadway adaptations of the 1960s (and one of the few with a reasonable running time). Some have criticized the film for being more "archival record" than movie musical, but in certain respects, this was David Swift's aesthetic goal. And even if one finds the director's choices uninspiring, Bob Fosse, Frank Loesser, and the incomparable Robert Morse are there to pick up the slack.

Here's a great jazz interpretation of one How to Succeed''s most memorable tunes: