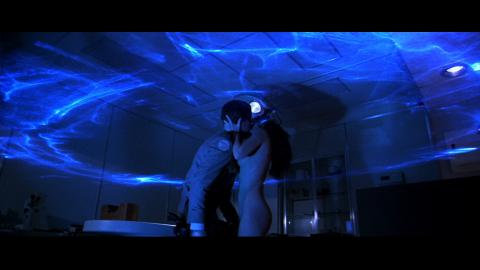 This re-evaluation of the Dan O'Bannon-scripted/Tobe Hooper-directed Lifeforce was written by WUD Film Committe member Vincent Mollica A 35mm print of Lifeforce will be the first half of a double bill concluding our Cannon Fodder series on Monday, May 4 at the Marquee Theater at Union South, presented in collaboration with WUD Film. Lifeforce begins at 7 p.m., followed by a Cannon trailer reel and Death Wish 3 at 9 p.m.

Made on a budget of roughly $70,000 and distributed by Mafioso, Tobe Hooper’s 1974 The Texas Chainsaw Massacre became an unexpected hit of massive proportions. More than 40 years later Chainsaw is still talked about as a defining film of the horror genre. Despite this, Hooper’s post Texas output was fairly minimal making only two features before helming the 1982 mega-success Poltergeist. History, however, has more or less erased Hooper’s involvement on that film, crediting its success instead to writer/producer Steven Spielberg. In 1985, through the work of trickster god producers Golan and Globus, Hooper was given another shot at the big time: Lifeforce.

In August of 1983, Variety reported that Tobe Hooper had signed on to make three films with Cannon (Golan and Globus’s production studio). Two years later, they reported that Cannon would be bringing the first of those films with them to Cannes. The film was an adaptation of the sci-fi novel “The Space Vampires” called Lifeforce. At that point Lifeforce was Cannon’s largest production, with a budget of $25 million. This was far and away the most money that Hooper had ever worked with or ever would work with again. By all reports Cannon had a very hands off relationship with the film, allowing him to do whatever he wanted with the project.

Lifeforce’s insane plot centers on a race of humanoid space vampires who are brought to earth after being found comatose in a burnt husk of a space shuttle. Not only are these space vampires though, they’re naked space vampires, the leader of which (Mathilda May) often lures in her victims with raw sexuality. As these creatures destroy the earth it’s up to the astronaut who discovered them (Steve Railsback) and an army agent (Peter Firth) to stop them. Running with a generous budget and this wild premise, Hooper pulled out all the stops in production. He hired cinematographer Alan Hume (Runaway Train, Empire Strikes Back), used a score from Henry Mancini (The Pink Panther), and effects from John Dykstra (Star Wars). He also built six London blocks at EMI’s backlot and used the entirety of one of its stages for the interior of the vampire’s spaceship.

In a 1983 interview, Lifeforce’s co-writer Dan O’Bannon said “if you have a strong story and characters but lousy visuals, you still have a hit. If you’ve got strong visuals but lousy story and character, you’ve got a flop”. In Lifeforce, audiences and critics found none of the above. The $25 million film opened with a little over $4 million, dropping almost exponentially over the following weekends. In the end the film garnered little more than $11 million dollars in box office. The New York Times called the film’s style “shrill and fragmented” and Variety claimed that the “broad…performances” and “preposterous dialog” pushed the film to “camp and unendurability” (this heartbreakingly appeared right next to a glowing review of Back to the Future, which would later match Lifeforce’s total earnings in a matter of a weekend). Although far from perfect, Lifeforce is a weird, kinky, gem that has a lot to offer beyond a few cheap laughs, much of which can be credited to O’Bannon’s script and Hooper’s direction.

Dan O’ Bannon, who co-wrote Lifeforce with Don Jakoby, is an incredible writer who, like Hooper, was forced to live in the shadow of his first big success: Alien. Before Lifeforce O’Bannon had depicted space as a means of transcendence in films like Dark Star and Heavy Metal in which characters turned into magical asteroids and space zombies, respectively. Lifeforce looks at this same concept, tying together the idea of space and vampirism to explore the exhilarating pull and push of a desire for eternal life. Lifeforce refuses to have the absurdist optimism of Dark Star or the straight horror of Heavy Metal, finding an uneasy middle ground. O’Bannon, at once drawn to and horrified by the great beyond of space, shows us a path to transcendence, but asks: “at what cost?” Although Lifeforce is actually rather goofy in tone, O’Bannon’s anxious musings ground the film and give it a melancholic sheen.

Meanwhile, Hooper’s direction juxtaposes the film’s massive spectacle with a strong undercurrent of sleaziness. Although Lifeforce looks beautiful, many scenes are driven by little more than copious nudity and extreme close ups of men’s sweaty faces. However, like The Texas Chainsaw Massacre and The Funhouse, Hooper’s treatment of sexuality and violence is often meant to disturb rather than to excite. At its best, the film, with its operatic sets and colors, takes on the feeling of a male adolescent sexual fantasy gone horribly wrong. Hooper’s horrific evocation of sexual anxiety feeds right into O’Bannon’s reverent depiction of outer space, producing some of the finest sequences in either of their careers.

Dropped by audiences and panned by critics, the gargantuan Lifeforce saw Hooper’s last real foray into the big time. He finished out his contract with Cannon on diminishing budgets making the solid Invaders from Mars and the excellent The Texas Chainsaw Massacre 2. Hooper had not even wanted to direct TCM2, but didn’t have the budget to get a director. Finally Hooper spent the rest of the 80s and 90s making what Sight & Sound has called “marginally released Stephen King films…and forgettable direct-to-video horror”. O’ Bannon had greater success after Lifeforce, both writing and directing his masterpiece Return of the Living Dead later that year and writing Total Recall in 1990. However, through the ‘90s he faded from film and in 2009 O’ Bannon, a truly endearing artist in need of serious critical reevaluation, passed away. In the end, Hooper and O’Bannon’s legacies will almost solely consist of Texas Chainsaw Massacre and Alien, leaving their work on Lifeforce left behind as a bizarre footnote. However, in the end, history’s subjugation of the film to the realm of failure doesn’t make it any less of a treat.