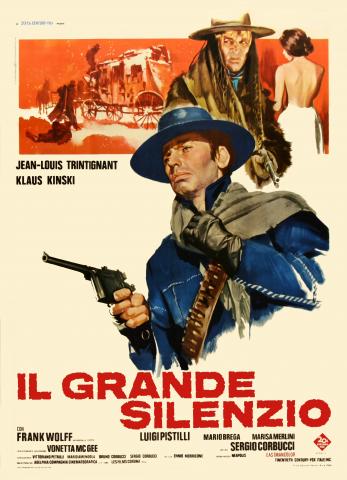 The following blog post contains spoilers for The Great Silence.

As discussed on our Cinematalk podcast with Alexander Payne, the ending of The Great Silence fulfills Sergio Corbucci's icy, pitiless vision of an America where murder drives the economy. Watching the bleak story unfold, it is hard to imagine that the movie could conclude any other way, and yet...

The producers of The Great Silence requested that Corbucci shoot an alternate ending, one where Sheriff Burnett (Frank Wolff) has miraculously survived the frozen lake and returns to aid Silence (Jean-Louis Trintignant) and Pauline (Vonetta McGee) in their final confrontation with Tigrero/Loco (Klaus Kinski). And don't worry about the bullets that seemed to have already destroyed Silence's hand, he has come up with a protective, secret plan similar to Clint Eastwood's in A Fistful of Dollars.

In addition to this "happy" ending (look at that smile on Trintignant), it seems the producers were able to devise a second alternative ending by re-editing the existing footage into a more ambiguous (and confusing) ending that suggests Pauline and the group of outlaw hostages have their lives spared. Both of these alternative endings can be found on Film Movement's excellent blu-ray release of The Great Silence. Most sources confirm that neither of these alternate endings were ever shown to audiences.

North American distribution and intellectual rights to The Great Silence were acquired in 1969 by 20th Century Fox, and it has been suggested that Fox was interested in remaking the film as a vehicle for Clint Eastwood. Unfortunately, the movie was shelved when Fox studio head Darryl Zanuck determined that the movie was too grim a trip to lay on American ticket buyers. It was not until the 21st century that most Americans had a chance to see one of Corbucci's finest efforts. Interestingly, the Italian distributors decided to use a pull quote from Zanuck to promote the movie in their original release trailer. Zanuck's comments translated: "The Best Italian Western of Recent Times."

Also discussed on the podcast, here is part one of Western, Italian Style a short documentary exploring the phenomenon of Italian Westerns narrated in English by Frank Wolff and featuring behind-the-scenes footage of The Great Silence. Plus, interviews with Corbucci, Trintignant, and other notable action directors like Sergio Sollima and Enzo G. Castellari.

And here is part two of Western, Italian Style: