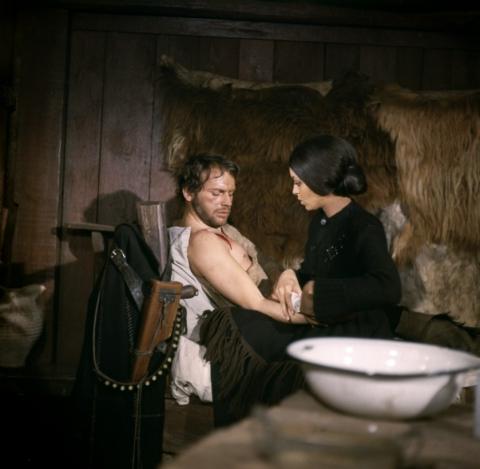 This week, the Cinematheque is providing free access to another restored Western, Sergio Corbucci’s The Great Silence (Il Grande Silenzio). Originally released in Europe in 1968 but not given an official US release for 50 years, The Great Silence stands alongside Robert Altman’s McCabe & Mrs. Miller and Andre De Toth’s Day of the Outlaw as one of the great snow-covered Westerns. In the story, an unethical judge looking to clean up his small, remote mountain community invites a group of ruthless, murdering bounty hunters to invade. American actress Vonetta McGee plays Pauline, whose husband is gunned down by a loathsome killer (Spaghetti Western veteran Klaus Kinski). Looking for revenge, Pauline then hires a mysterious, mute drifter, known only as Silence, played by European cinema legend Jean-Louis Trintignant.

The Great Silence is a violent, mythic, and nihilistic tale that provides a grim vision of capitalist America where murder equals money, a theme it shares in common with Sergio Leone’s "Dollars" trilogy. Director and co-writer Sergio Corbucci, who had previously directed Westerns like the classic Django and the Burt Reynolds vehicle Navajo Joe, wisely stayed away from the typical sun-baked locations of other Spaghetti Westerns in favor of Italy’s snowy Dolomite mountains. Corbucci achieves a unique and appropriately icy mood, one that is reinforced by the haunting score of the director's frequent collaborator, composer Ennio Morricone.

The Great Silence screened in its recent restoration at the 2018 Wisconsin Film Festival, and now, the Cinematheque has a limited number of opportunities for you to view The Great Silence at home. Simply send an email to info@cinema.wisc.edu, and remember to put the word SILENCE in the subject line or the first line of the email.

On our Cinematalk podcast this week, we are privileged to welcome one of the finest of all contemporary filmmakers, Alexander Payne. Our discussion begins with a look at The Great Silence and the mythic qualities of the Western genre. We also touch on the development of his cinephilia, the future of moviegoing, and "the three H's".

Usually writing in collaboration with Jim Taylor, Alexander Payne is the renowned director of sophisticated comedies for adults like Citizen Ruth, Election, About Schmidt, Sideways, The Descendants, Nebraska, and Downsizing. He is the recipient of two Academy Awards for his screenplays and he is also a passionate movie-lover. In 2014, he visited madison to present a Wisconsin Film Festival screening of another 60s Italian classic, Dino Risi’s Il Sorpasso. He also joined us at that time for a Cinematheque screening of Nebraska. This week he spoke to us from his hometown and the frequent setting of his movies, Omaha, Nebraska. You can hear this episode through Soundcloud, by subscribing through Apple podcasts, or simply scroll below, click, and begin listening.