PINA: A Dance Elegy in 3D 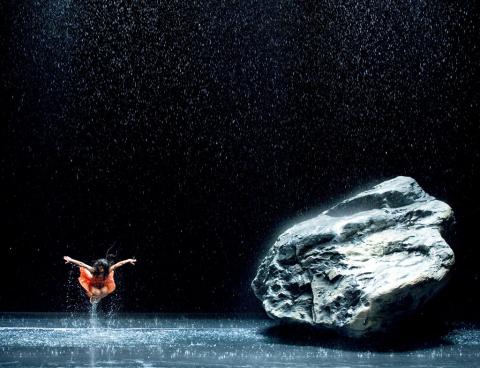 These notes on Wim Wenders' Pina were written by Matt St. John, PhD candidate in UW-Madison's Department of Communication Arts. A 3D DCP of Pina will screen at the Cinematheque's regular venue, 4070 Vilas Hall, on Friday, May 3, at 7 p.m. Free admission for this semester's final 3D screening!

Before he ever recorded the first shot of his 3D documentary Pina, New German Cinema auteur Wim Wenders had been planning a collaborative film project with German choreographer Pina Bausch for more than two decades. Her striking, dramatic choreography immediately appealed to him when he attended a retrospective in 1985. The filmmaker and the choreographer soon began discussing the possibility of a film together, but Wenders hesitated to produce the project until he felt film technology could adequately capture her art on camera. This long delay in production tragically caused Pina to become an elegy, instead of just a collaboration.

Bausch passed away just two days before a final rehearsal shoot for the film in June 2009, after a period of substantial, detailed preparation with Wenders for the film’s 3D production. The director realized the potential of the format when he saw a screening of U2: 3D at the 2007 Cannes Film Festival. In an interview with Collider’s Sheila Roberts, Wenders recalled expecting to see a gimmick, but instead finding the solution to his decades-old obstacle to making a dance film: “I saw the answer to 20 years of hesitation and 20 years of not knowing what to do... There was a tool that allowed me to be with Pina’s dancers and to be in the water swimming with the fish and not just looking from outside at the aquarium.” After this unexpected inspiration, Wenders and Bausch planned their 3D film for two years, selecting four of her works that would be performed in a single season by her dance company Tanztheater Wuppertal and filmed for the documentary. He worked with technical experts to troubleshoot the complication of filming real locations and live actors in 3D, with the persistent problem of jerky motion that had to be overcome before they could begin filming a documentary about dance.

After Bausch’s passing, Wenders canceled the film’s production until her dancers convinced him to continue. They shot the four performances as planned, but their bulky equipment required Wenders and his crew to film the dancers and stage for a few days outside of the public performances. To produce the effect of being in the performance, Wenders hoped to capture shots from almost any position on stage without disrupting the dancers, so his crew used an enormous crane with a remote-control camera. The crane blocked the view of over half the auditorium, creating a need for their private shoots. The cumbersome equipment does enable surprising perspectives in even brief moments, like the early low-angle shot that causes a red cloth to fill the foreground during Bausch’s version of “The Rite of Spring,” and the crane memorably makes the 3D even more vivid in the performance of “Full Moon,” capturing falling, splashing water from all over the stage.

Even with the 3D technology and full access to the stage, Wenders was not content to include only the four performances. In the Criterion commentary for Pina, Wenders explains that it was no longer a film made with Pina, but now for Pina, and he wanted to collaborate with the dancers to honor her work and explore its impact on them. Wenders intersperses the four stage performances with portraits of the dancers and vignettes of other pieces by Bausch. For these new selections, Wenders tried to replicate her singular artistic process. In rehearsals, Bausch would ask her dancers questions, but they could only answer with movement, instead of words. Wenders recounted his adaptation of this method in the Collider interview, saying, “I started asking the dancers questions, like Pina in the rehearsal room, and they all gave me lots of answers about Pina, about how Pina had seen them, how they had seen Pina’s eyes on them, how Pina had seen something in them that they didn’t even know themselves, and each of them answered very personally…” But Wenders added a rule: the dancers could not improvise. Instead, they were only allowed to answer with movements they had created with Bausch. Wenders and the dancers transfer these movement-answers to locations all over Wuppertal, the city that is home to Bausch’s company. The dancers take her work to tram cars, busy streets, open fields, and creeks, opening up an array of rich spaces for Wenders’ 3D recording, and they perform with odd accessories, from a barking dog to a leaf blower. Both puzzling and powerful, the vignettes are loosely grounded by intermittent portrait shots of the dancers, with brief voiceovers about the directions they received from Bausch.

After Wenders, his crew, and the dancers faced challenges and complexities throughout the film’s production, Pina was praised for its impressive execution. This film arrived during a spate of poorly shot or converted 3D films, following Avatar’s success in 2009, and critics welcomed a thoughtful use of the format. In her Variety review, Lisa Felperin appreciated “proof that the latest 3D technology is good for a lot more than just lunging knives and fantastical storylines.” Entertainment Weekly’s Lisa Schwarzbaum writes, “So this is what 3-D is capable of when used for art rather than the commerce of hiking ticket prices and repurposing cartoons… Wenders uses this old/new, interesting/gimmicky technology to play with the human perception of dimensionality as something subtle and profound, and not just a snazzy trick.” Even Roger Ebert, who frequently disparaged 3D as superfluous, acknowledged the quality of the technology in this film, writing that Wenders “only uses it when he knows why and how it should be employed.”

The technology in Pina is remarkable, but the film is also powerful because of its elegiac, collaborative form. Pina Bausch was frequently quoted as saying, “I’m not so interested in how people move as in what moves them.” In Pina, Wenders is interested in both. The 3D cinematography surveys even the most understated movements of Bausch’s dancers, and the performances allow the dancers to mourn Bausch, by translating her work to new contexts and a new medium.