DANGEROUS GAME: Madonna Looks Into the Mother of Mirrors 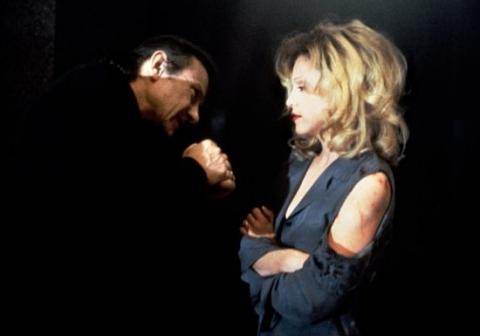 These notes on Abel Ferrara's Dangerous Game were written by Leah Steuer, PhD student in the Media & Cultural Studies division of Communication Arts. A 35mm print of Dangerous Game will screen at the Cinematheque's regular venue, 4070 Vilas Hall, on Friday, April 26 at 7 p.m. The screening will be followed by a discussion with J.J. Murphy, UW Professor of Film and author of Rewriting Indie Cinema: Improvisation, Psychodrama, and the Screenplay. Free admission.

Is the power that a star radiates onscreen equivalent to a performance? How far does one need to step outside oneself in the act of acting? And how accurately does a camera capture The Work, turning a private human moment into movie magic for millions? Abel Ferrara’s twisted, troubled Dangerous Game (1993) is ruthless in its pursuit of these complex questions about what it means to be an artist. Game debuted to mixed reviews, vicious controversy and infighting among its creative personnel; lead (and producer) Madonna bitterly distanced herself from the project before the film hit theaters, while Ferrara continues to blame its bad publicity on her performance to this day. The turbulent history of its production is evident in Game’s every grainy, dark shot and bit of angry dialogue. It’s not a fun watch, but it’s a daring cinematographic experiment with oddly compelling performances at its center from Madonna, Harvey Keitel, and erstwhile 1990s bad boy James Russo. This movie-within-a-movie shows us the fallout of an unlikely collision between two artists - Ferrara and Madonna - with completely different auras and careers.

Game cuts close to the bone, thinly veiling Ferrara’s self-portrait through Keitel: sporting a ragged haircut and weird indoor sunglasses, Keitel’s Eddie Israel is a masochistic auteur who’s caught between the dull illusion of family life and the siren song of sex, film, and art. Though his look evokes parodic machismo a la Tommy Wiseau, there’s nothing funny about Keitel’s raw, furious performance of a man who’s bad, mad, and dangerous to know. He alternates between physically and emotionally abusing, then sexually coercing Sarah (Madonna), the lead of his marital drama Mother of Mirrors. Meanwhile, Israel struggles to elicit artistry from his other lead (Russo) while deflecting, and then eventually sabotaging his relationship with, wife Madlyn (played by the director’s real-life wife Nancy Ferrara). Both Mother of Mirrors and its host-film Game end up messy, unsuccessful, and fragmented, denying the audience closure for the trauma of bearing so much mutual abuse and suffering. Madonna bears the brunt of the brutal script, and it’s hard not to wince at the nature of Israel’s insults towards Sarah (“You commercial piece of sh*t!”). Critiquing her performance in 2002, Ferrara made clear his vitriol towards the kind of charisma that both Madonna and her character embody: “She has the confidence to get on stage and sing, but she ain't got...a different kind of confidence, that ability to look into the eye of the camera without looking at the camera.” His take was echoed by contemporary critics, but 25 years and a change in cultural perspective on femininity and stardom have encouraged fans to consider Madonna’s surprising range of improvisation, steeliness, and vulnerability in a difficult role.

Movies about making movies can go to dark and reflective places — look no further than the genre’s most iconic entry, Sunset Boulevard (1950). Meta-narratives like Dangerous Game’s require the audience’s attention to the unraveling of two simultaneous stories, and an abandonment of the pleasure that passive reception of a fiction can provide. There’s something bittersweet about seeing how the magic is made, even in fun and fleet-footed fare like Adaptation (2002) or Get Shorty (1995). But Ferrara’s Game uses this story layering to make even more nihilistic observations about human connections than he did with previous films like neo-noir King of New York (1990) or Bad Lieutenant (1992). By cutting quickly between film stock and video footage, by allowing the camera to shiver while actors dig dejectedly for lines they can’t remember, by allowing the lens to linger on actors-playing-actors-playing-directors, this film strips away the smooth and illusory quality of the cinema itself. For better or for worse, Game exposes the chaotic subconscious of both the movie-maker and the performer; the results are rarely pleasant, but consistently spellbinding.

<<BLACK BOOK: The Paradoxical Pleasures of the War Thriller
PINA: A Dance Elegy in 3D>>