Bringing THE ROAD BACK Back 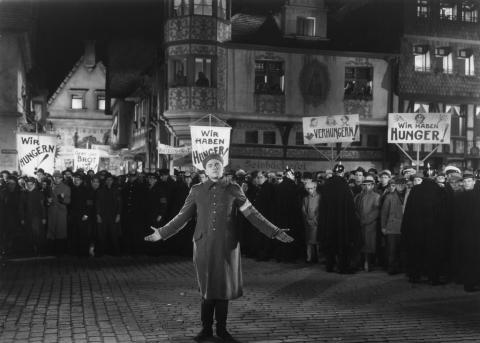 These notes on James Whale's The Road Back were written by Lydia Rice, Exhibits and Data Manager at University of Wisconsin Press. A 35mm print of The Road Back, restored by the Library of Congress in association with UCLA Film & Television Archive, Universal Studios, and The Film Foundation, will screen in our "It's A Universal Picture" series on Sunday, April 14 at 2 p.m. at the Chazen Museum of Art. Restoration funding provided by The Film Foundation and the Library of Congress at the Academy Film Archive.

Lewis Milestone’s All Quiet on the Western Front was a critical and financial hit for Universal Studios in 1930, winning Academy Awards for Best Picture and Best Director. But its grimy and depressing portrayal of World War I, explicit pacifist message, and focus on dispirited and cynical German troops (traits it shared with its source novel by Erich Maria Remarque) did not endear it to the rising Nazi party when it first premiered, in slightly edited form, in Germany. Brownshirts greeted multiple screenings with rioting in and outside theaters, their tactics ranging from releasing mice and smoke bombs to attacking theater patrons. The chaos that resulted led to the film being pulled from circulation in Germany.

Despite its reception abroad, Universal held onto the rights of Remarque’s spiritual sequel, The Road Back, bought when it was just a title and an idea in 1929, two years before it was published. Beginning where its predecessor ended, in the trenches, The Road Back follows a group of young German soldiers from the closing days of the war, through their attempts to adjust to civilian life in a country that is economically, politically, and morally unstable.

In 1931, the project was given to director James Whale, who, like Remarque, was a World War I veteran. However, the estimated high production cost of The Road Back in the midst of the Great Depression and a year of losses for Universal caused the script to be shelved. In the meantime, Whale would go on to direct, among other films, By Candlelight (1933) and Show Boat (1936), both which were shown at the Cinematheque earlier this year.

The Road Back was dusted off in 1936, in the hope that it could be as financially and critically successful as its predecessor. By then, the Nazis were in power, and banned works that challenged their ideology and politics. At the time, few Hollywood films acknowledged the rise of fascism and militarism abroad, for fear of losing revenue in international markets.

The Road Back was moved into production with little difficulty; however, problems arose when filming started. For the opening scenes in the trenches, a large outdoor set was built, with an enormous matte backdrop and tracks for a camera crane. Soon after filming commenced, the cast and crew were at the mercy of rain and fog. Shooting was pushed back further when Whale got the flu and the original cinematographer was fired when his alcoholism interfered with the production. The most tragic event occurred during the setting up of the battle scene, when an extra died in a freak accident caused by an explosive. When filming wrapped, the movie was almost $200,000 over budget and 19 days over schedule.

But the biggest uproar connected to this ill-fated production originated outside the studio. Dr. Georg Gyssling, a Nazi official and German Consul in Los Ageless, sent letters to 60 cast members, warning that any future films of theirs would not be shown in Germany. A Nazi official threatening the cast of a Hollywood production was nothing to scoff at, and there was swift and vocal backlash from Hollywood, the Anti-Nazi League, and the State Department.

Before The Road Back’s New York premiere, Whale shot footage that moved the battle scene from before the signing of the Armistice to afterwards, and removed two scenes to shorten the runtime. But after a mostly tepid reviews and a downturn in sales, Universal president Robert Cochrane and executive vice-president Charles R. Rogers took advantage of Whale filming another movie at a different studio, and imposed their own alterations before The Road Back’s next release, in Los Angeles.  A different director was brought in to reshoot two key scenes. A more conventional love scene replaced a sorrowful one, where returned soldier Ernst (John ‘Dusty’ King) and his sweetheart Elsa (Jean Rouverol) confronted the gulf in their relationship caused by the war.

The other major alteration was the ending. Originally far more politically charged, it featured Ernst and his former comrade Ludwig (Richard Cromwell) sadly watching a group of young boys taking part in military exercises. This was the closest the movie came to referencing the rising militarization of Germany. It was replaced by an ending that was far more conventionally romantic. It still acknowledges and condemns the current armament, but it  doesn’t single out any particular country.

Though commonly assumed to be another last minute addition, the comedic scenes featuring Willy (Andy Devine) and Tjaden (Slim Summerville, the only actor to reprise his role in All Quiet on the Western Front) were part of Whale’s original cut. Other scenes were trimmed, or removed entirely, shortening the runtime from 105 to 100 minutes.

The Daily Variety claimed that, like All Quiet on the Western Front, The Road Back had been reedited for German distribution. Universal did still have holdings in Germany, and perhaps they did hope they could distribute the film there. But the studio denied that the reedits were for that specific market; Cochrane claimed he felt the material could be improved with more love scenes. A comprehensible reaction from a producer, since this was a serious, down-beat anti-war movie that wouldn’t sell well in Europe, and wouldn’t be too appealing for Americans living through the Great Depression.

The Road Back did make some money, and got positive (if half-hearted) reviews, but it did not reach the commercial or critical heights of All Quiet on the Western Front, though like its predecessor, it was banned in Germany. It didn’t decimate Whale’s career, but it was the beginning of a decline in influence. For most of his subsequent films, Whale contended with less creative control, lower budgets, and fewer profits; he did not make another feature after 1941. In 1939, The Road Back was re-released, with added footage that made it more explicitly anti-Nazi, and included a montage featuring an actor playing Hitler. For a while, it was the only print in circulation. This restoration is similar to the studio-altered 1937 Los Angeles release, but it remains the closest approximation of Whale’s original intent.