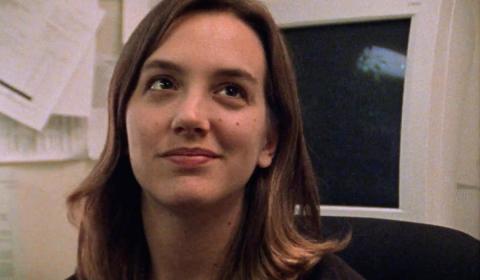 These notes on Andrew Bujalski's Funny Ha Ha were written by Ben Donahue of WUD Film. A 35mm print of Funny Ha Ha will screen on Thursday, March 28 at 7 p.m. in our regular Cinematheque venue, 4070 Vilas Hall. Andrew Bujalski will be present to introduce the screening and participate in a post-film discussion. Bujalski will also be present for a screening of his movie Computer Chess on March 29 and a special showing of Sylvester Stallone's Paradise Alley on March 30. Admission is free for all screenings!

“Film is, to me, just unimportant. But people are very important" (John Cassavetes).

It would probably be impossible, or at least morally reprehensible, to discuss the Mumblecore movement without mentioning what film pioneer John Cassavetes did for American independent cinema. His stories weren’t about death or violence, but about the lives of people—real people. And it is this sentiment that is perhaps the most important influence Cassavetes had on the artists who followed him. The Mumblecore movement is a direct descendent of the low-budget American style of cinéma vérité that Cassavetes pioneered, which can in turn be traced back to the French New Wave. Aesthetically, Mumblecore, French New Wave, and the works of Cassavetes all feature low-budgets, non-actors, seemingly improvised dialogue, and on location shooting. These similarities may link the different groupings of films on a surface level, but it’s the dedication to telling stories about real people simply living that truly unites them all.

Sometimes referred to as “Slackavetes,” Mumblecore incorporated Cassavetes’ commitment to telling purely human stories with the meandering and purposeless twentysomethings who loitered around in Richard Linklater’s 1990 film, Slacker. Twelve years after Slacker, a 27-year-old Bostonian by the name of Andrew Bujalski would release his film Funny Ha Ha, which was both Bujalski’s first feature-length film as well as arguably the first film in the Mumblecore genre.

Funny Ha Ha follows Marnie, a young twentysomething played by Kate Dollenmayer, as she tries to balance her relationships, her own self-improvement, and her search for a fulfilling career. The film’s languid and plodding storytelling mirrors Marnie’s own confusion and lack of direction. She wallows in self-pity and misreads just about every social cue that is thrown at her. Her character could have easily been a sardonic comment on post-college graduates in the beginning of the 21st century, unbearably awkward as she is. But as much as Marnie can be seen as self-destructive and at fault for all of her problems, Bujalski’s delicate writing and Dollenmayer’s entirely honest performance help us not only relate to but also empathize with Marnie.

Amidst a maze of detours and distractions, Marnie slowly but surely makes incremental progress. She ruptures relations with old friends and formulates new ones. Through a painful process of trial and error, it appears that Marnie might just be on the right track to discovering who she is, and what it is she wants out of life. Thanks to Dollenmayer’s performance, Marnie becomes a subtle heroine of the modern world. After all the awkward conversations, dead-end jobs, and failed relationships, Marnie emerges on the other side still standing. It’s admirable how much Bujalski makes us laugh with Marnie and her friends and not at them, and how he is able to relate the melancholic malaise of an entire generation to people both older and younger.

Funny Ha Ha was Bujalski’s first film, and it was the first film in what would soon become a major movement throughout independent American cinema. With his 2005 film, Mutual Appreciation, Bujalski solidified himself as a leading voice in Mumblecore, which would grow and influence many current filmmakers, including Greta Gerwig to cite one example. Mumblecore reflected very accurately the mundane, awkward, and sometimes painful nature of living, but if Funny Ha Ha has anything to say, it is that we have to be able to find the humor in our life. Laughter heals all wounds, especially when you’re laughing with someone else.

<<THE BLACK CAT: From Caligari to Hitler in One Lurid Package
Bringing THE ROAD BACK Back>>